[365 Days of Extraordinary] Day 32 Transcript: Fake It Till You Make It

Yeah, I’m here and I am sick and I’m cold, so I’m going to leave that on. I hope it’s loud enough.

Do not become Elizabeth Holmes and start Theranos. Years ago, I had her on my list as a great female entrepreneur to follow and look at and, you know, was all … That wasn’t faking it till you make it, that was a big lie. 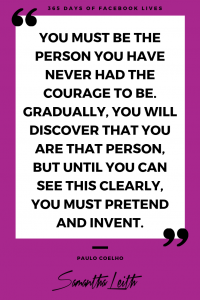 So firstly, if you’re in a situation where you feel like you need to fake it till you make it, which we’ve all had to do, God I’ve done it, ask yourself how would a truly confident person act in this situation? Someone who’s incredibly confident in this kind of thing, how would they actually act in this situation? And kind of model that a little bit, I guess. So, act as if you did have more confidence in that area. Remember, confidence, not competence.

So on that, it’s about how you would act in that role or that position or in that situation. It’s not about having your photo taken in front of a private jet that you can’t afford because you’re faking it till you make it in your big business. That’s just becoming another Fyre Festival, and you’re truly just a douche bag if you do stuff like that. It’s just not cool.

Hey, what you can do though, to help you become more assertive and confident until you’re getting there, dress well, you know. Putting on a … says me with no makeup, but I feel like shit so forgive me. Dress well, smile, strike a power pose. There’s a great Amy Cuddy TED talk on power poses, you know, think of Wonder Woman.

And what the power pose can actually do is decrease your stress levels or decrease your cortisol, and it increases your testosterone, which helps with your confidence. So it’s quite powerful, you know, if you need to go into a situation where like, “Okay, I’ve got to get a bit better on this,” strike a power pose before you walk in, and I promise it will help.

Follow a mentor or role model or a leader that you think has what it takes in that particular area, and don’t copy them. Copying’s [inaudible 00:03:55]. Don’t do that, but you can act a wee bit like them. Take some of the things they’re doing and make them your own, and that will again actually build on those confidence blocks. And in the meantime, there’s a little bit of faking it till you make it.

Act assertive. Assertiveness in any situation can make up for a hell of a lot of lack of confidence, and assertiveness and confidence are different, okay? I’ll go into that another time.

Another thing that can help you act more confident, fake it till you make it, is exercise, which I’m not doing at the moment, and I include sex in that. ‘Cause any of those things get all your endorphins going, which help make you feel better. Endorphins don’t mean all that stuff is going to make you feel better. So it’s again, helping with the fake it till you make it. Listen to music, pump up the music. I talk about that all the time, but that will really help.

If you’re faking it till you make it, do it for the right reasons. So say you’re wanting to go into a particular area and … or a job interview or anything where you think you need to up your game a little bit. That’s okay, but don’t fake it till you make it for prestige. Don’t, you know, pretend you’re really wealthy or you’ve … speak five words of Italian but you tell people you speak Italian. For those kinds of reasons, it’s not worth it and you look like a toilet ’cause you’ll get found out.

And the other thing is, if you are needing to fake it till you make it in some area … I say Italian ’cause I’ve got a little book about learning Italian here, I don’t know why, it’s good to lean my phone on, is learn the skills that you think you need to actually get more confidence and more competent in that area. And as you increase in a skill, the faking it will decrease.