Hey guys, happy Sunday night. Sunday night, as you know, I do a Q&A and this week I have to talk to a few people about habits, so I thought let’s do a Q&A on that, and the power of daily habits in life. And it’s not just in life in terms of, you’ve got to get that massive deadline, whether it be money or a health goal or … A daily habit doesn’t have to be related to something that’s like an end piece, a daily habit is just something you have to do. For example, brush, brush, brush, a brush. We all learned that really, really, really early on, and for some of us, we learned to do it twice a day with flossing. For others of us, we learnt to do it once a day. And you flossed the day before you went to the dentist, so you could say you flossed.

was a habit that was instilled really, really early on that kept us going for life for many people. So what is it that we can do to create even the most teeny tiny habits that help us get successful, and are they actually important? Well, I’ve had this conversation a little bit with a couple of people in my life this week who have thought, “Yeah Sam, you’re a little bit too scheduled within your life. You’ve got too many habits like ticked off every day. Maybe last, just a bit more about living rather than doing all these things.” And I disagree. I think the things that you set yourself up for success in terms of those repetitive actions, those repetitive thought loops those repetitive …

Even the repetitiveness of being … Of people you surround yourself with, those are the habits that lead you onto success. And it’s not that hard to do. We’re not talking about having to go, “Okay, what are the 20 habits that I must do every day to be successful?” Sometimes it’s only a tweak of a couple that can have massive impact in your life. Some of the daily success habits are, meditation. I’m late to the meditation party, but I’m loving it. I’ve tried a lot over the years. You’ve heard me talk about it. I’m currently doing a Dr. Joe Dispenza meditation program, which I’m really, really enjoying, but that’s an hour and 10 minutes of my morning, every morning. And that’s a habit that I have to do because I want to do it. 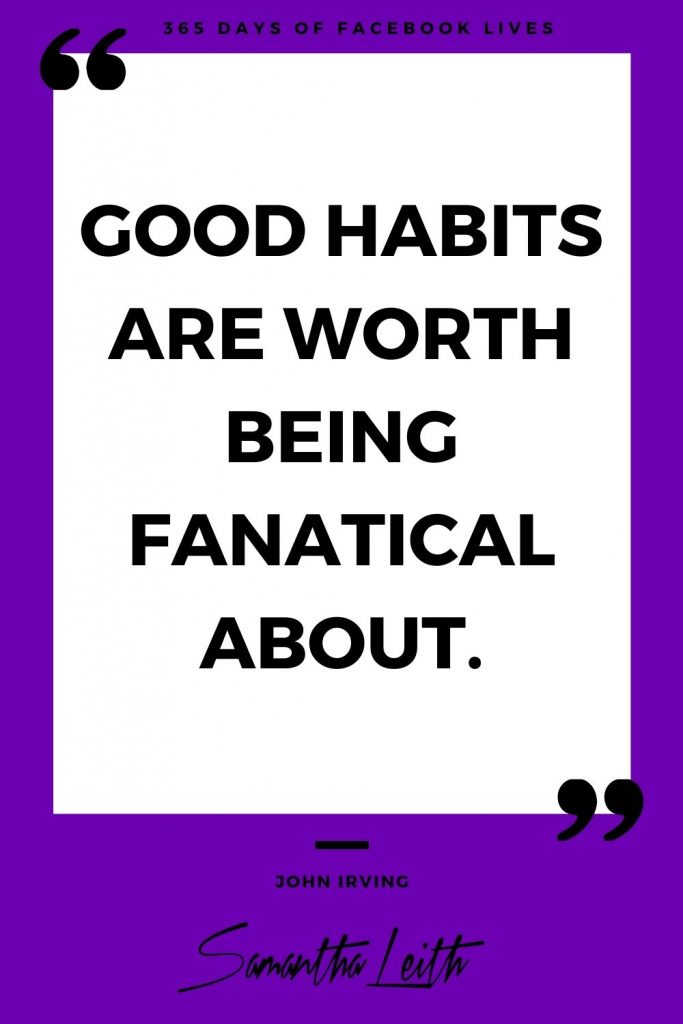 The thing would habits is it’s not like someone is standing over you going “You must do this to be successful.” You create it for yourself. You decide that you want the habit in order to have the effect of the habit, in order to have the result of the habit in order to even just feel how that habit makes you feel. For example, if you have a habit every day of a dance class, you might not want to be a dancer, but the feeling, the motion, the music makes you feel fabulous. And that it’s what you’re after every day. So that’s a really important daily success habit for you.

The habit of reading, if you look around my office, what did I get this … This week I had two new books, arrive Own The Room and Presence. I haven’t read them yet. Ironically, they’re both yellow, so I might have to color coordinate my bookshelf. But reading is a really important daily habit for me, regardless of whether it’s autobiographical or biographical or whether it’s self-help motivation, business, fiction. I like crime fiction, that’s my little weak point … Not weak point, bad terminology. Crime fictions is my go to if I want that chill space in reading. Reading is a daily habit for me. These lives are a daily habit for me.

Now it’s the odd day where I’m like, “Oh shit, got to do a live.” It’s just a habit. It’s now part of what I do much like getting dressed much like cleaning my teeth. People think … Some of my clients for example, have thought, “Oh, I’ve got to set up those daily habits, and if I set them up and I don’t do them, then I’ve failed.” It’s like another checkpoint in life, and that’s not what they’re meant to be. Daily habits are meant to be things that you start to do, and then they become part of your life. It’s like a muscle memory. It’s a no brainer. It’s what you do. You eat your five serves of fruit and veggies, it is what you do. You don’t have to think about it. There’s no I won at doing it, and there’s no I failed at doing it. It just is. And they are so vitally important.

I really am going to stress it time and time and time and time again, not that into your heads. So when I’m asked, “Why do I have to have daily habits?” Because you do, okay? I could get all technological about it and tell you that the way your muscle memory reacts when you do these things over and over again, and have it go as part of your life and how it changes your mind when you’re doing things, I could talk about all that stuff, but just know that you need to do it. some of the daily habits that I’ve set up for success and many of my clients are set up for success are journaling. Big one.

Journaling takes a different form for many people. To me, it’s like a free writing thing in the morning, which you’ve all seen me, I’ve held up my journal and showed you. It’s like a page of blah, blah, blah. Sometimes it’s deeply meaningful sometimes it’s “Oh my God, I can’t believe that movie last night.” It is just whatever those thoughts I pour out of my mind every morning, but it’s a habit. The next thing is gratitude, I think is one of the biggest daily success habits you could possibly have, and that is the giving thanks for stuff that’s going on in your life. Again, it can be massive things that you give thanks for, but it could be teeny tiny things.

It could be how great your coffee was, or it could be that you won that amazing $200,000 contract with that government agency that you’ve been pushing and pushing and pushing and working for for six months. Gratitude can take different forms. I do my five power statements every day. How do I want to feel that day? What do I want to embody? I’m tenacious. I’m sick, whatever they may be, and they’re going to be different for everybody. I’m a go getter I’m body, blah. You make them up because it’s about you. It’s about how you want to feel. I wrote my five big dreams. I also write my five current goals, my 10 current goals. I tweak how I do that.

What are some of the other daily success habits that I think everybody needs to have? Exercise is a big one. Now that’s a tough one for me for a long time. I grew up thinking exercise is what you needed to do in order to lose weight. Exercise wasn’t actually something you did because you enjoyed it. Exercise was hell on wheels. Unless you were dancing in a nightclub or having sex, exercise. Wasn’t fun. No, you never did it. I probably didn’t come to exercise till my late 20s, early 30s. Now I’ve started doing cash to 5K I’m on week four and freaking loving it. But I do exercise every day, whether it’s an hour walking the dog or an app on my phone or a yoga class or a bar class, or … Can’t do those at the moment, but any of those classes that I was doing, and as I said, now they’re running is something that’s so good for you to do every single day.

My daily habit of coffee, big one for me. For other people that would be completely insignificant, but my routine of the ceremony of sitting, having my coffee, having my thoughts, that’s a big one for me. For some people that might be sitting down with the newspaper, reading the newspaper online. Whatever they are, the reason why right or wrong with a daily success habit. It’s what brings you joy, what brings you momentum, what makes you get onto that next thing? What sets you up in a space to do what you need to do that day? Take singers for example, part of their daily successful formula would be warm up exercises, every single day, deep breath work every single day.

If you’re into a lot of mindfulness, part of your daily success formula, and some of the daily habits you might do might be really deep breathing work and ice cold showers, like the Wim Hof method. There is no one size fits all for anyone in this area, apart from the fact that it is important for everyone. It really is. If you’re going to ask me the question as I’ve been asked this week, “Is it important, what should I do?” Yes, it is vitally important for your success that you have daily habits, vitally important. What they are depends on you and what they are, you need to make up.

There was no rule book for it, none whatsoever. I’ve known people that one of their daily habits was to go to the same cafe every single morning and have exactly the same breakfast. And that set them up for a day of doing whatever they needed to get done that day. I would be bored, batshit going to the same cafe every morning and having the same breakfast. That’s not for me at all, but for other people that is like everything. So make it about you. Ask yourself this week, what are the things you do, whether it’s daily or occasionally that when you do them, you go into that, “Ooh, that makes me feel good. I’ve got a bit more rhythm in my step. I can do a bit more.” That’s what you want more of. Don’t over think it, and don’t try and get too many of them.

You just want a handful of them that you know, that you can just keep the momentum going every single day, so it’s a no brainer. So it’s an absolute no-brainer, it’s just like washing your teeth or making your bed in the morning, which okay you all need to do. I’m pointing my willy finger at you, making your bed every single day is a very important one. In fact, you can read a book about making your bed every day. Have a great Sunday guys. Let me know what your daily habits are. See if we can compare notes and I’ll see you tomorrow. Bye.