Good evening. So, what do you do if you know you can’t reach a goal? I’ve got lipstick on my teeth, hey. This has come up for me a bit in the last couple of days, because as you know, this is my year of extraordinary. So I woke up the day after my 45th birthday last year and I decided to do 365 days of Facebook lives of which I think, did I just taught 324 I think? Yeah, somewhere around that. And along with that were a whole set of things that I set myself for that 12 month period to do, or to be, or to have, or to earn or to, there was so much stuff. There was things like a number of clients. There was income levels, there were fitness goals. There were house goals. There were so many things I wanted to achieve in that year, one of which was a Facebook live every day.

Which I’ve done pretty well on. And over the last couple of days I thought about, “Okay, we’re getting closer to this, you know? 15th of June isn’t that far away.” In fact, 40 days away. And thank you, Amanda. And there’s some I’m not going to get. And some of the ones that I’m not going to achieve are completely under my control, they’ve been completely under my control. And I’ve had to look at, well, why haven’t I done them? What have I been thinking? Because we all know that we do things based on what we’re thinking. So what are the things I’ve been thinking to prevent me from doing the things I wanted to do? Very introspective stuff.

And then of course there’s been things that have been completely outside my control. So one of my goals for example was to be on 52 stages within that year, that 365 days. Well, yep, managed a few of them, but then everything got canceled. And I could have done more in the first half of that year and not so been impacted by the second half of the year, thanks to what’s going on in the world.

Again, I have to look at why, well you know, what was my part in that? Because you can’t, when you’re going for a goal, you can’t blame not achieving it completely on external factors. Sometimes totally you can, but it’s not that often. It’s not that often, you know? If I had rebooked, if I had, another one was books I was reading. So I aim to read a book every week. I haven’t done that so much this year. I’ve probably done a book every two weeks. I can’t catch up on the next four weeks. Like, that’s not going to happen. So do I let myself off the hook? Do I go, “Whoa, why was, did I slack off a little bit? Did I hope I was going to get it all done in four months, five months at the end of the year? What was the thinking behind it?” 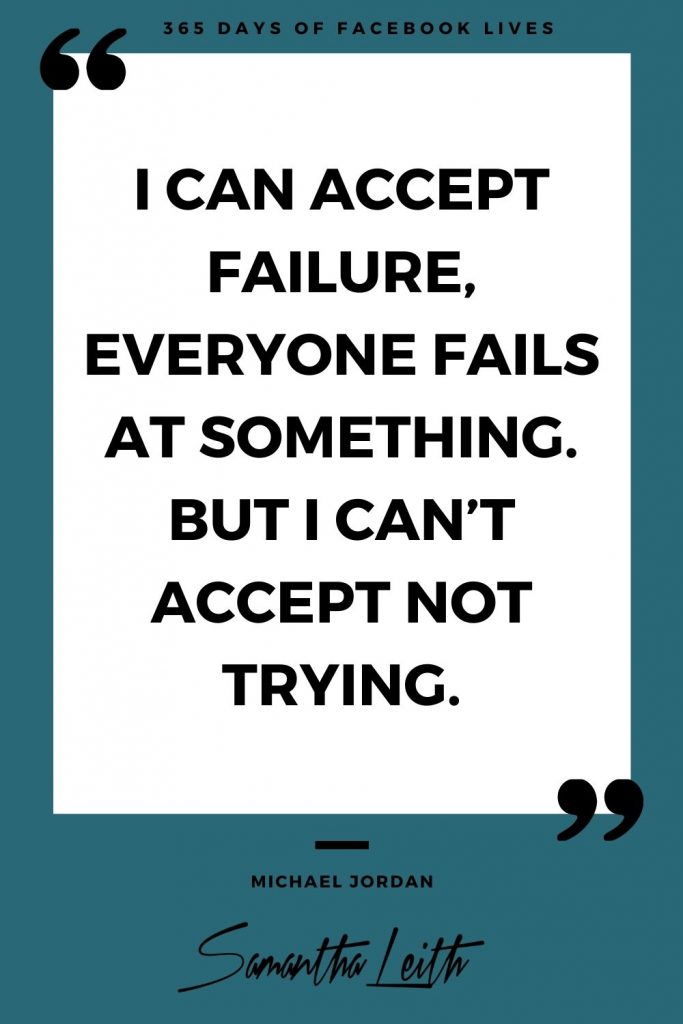 Or, and this is another question you need to ask yourself. Did I just set myself a really effing, ridiculous goal? Because a lot of the time that’s what we do. A lot of the time we set the bar up here and it would take a miracle to achieve it. And then we get into that, “Oh, that fabulous habit that we get as people as we go.” Well, see, I told you I’m hopeless. Yeah, told you. Didn’t get my goals on. Clearly, stupid, hopeless, cactus, too old, too fat, too dumb, too smart, too stupid, like too something to have actually done it. That’s the stuff that goes on in our heads, when the reality is, we just set a bad goal. Oh, is a goal good or bad?

You know what I mean. We set an unrealistic goal. Now I’m a believer in setting goals that are a reach, are a stretch, a scary. And you know, you really got to work at to get, but there’s a fine line between it being a stretch goal and just being in a world of pure imagination. That was not going to happen, okay? Was not going to happen.

So what do you do now when you get to the end of a run like this, and this is for those of you that are watching this, it might be that you on New Year’s day set yourself things to get done that year and things happen. Me, I did the 15th of June. It might be that you’ve set yourself a goal from period of a month, or it might be you set yourself a couple of goals for a three month period, or while we’re in isolation. It doesn’t matter what the period is, but what you do if you’re getting through and you’re like, “It’s not going to happen. Like it’s just not going to happen.”

First thing you need to do is forgive yourself. Yeah, big one. You can go back to my live about self-forgiveness. If you don’t, this pre-forgiving yourself for not doing it will release you of all that anxiety and the pressure that you might try and force on yourself in order to get something done that you know you’re not going to get done. So if we forgive yourself and go, “You know what, it’s not going to happen. It’s okay. I’m okay with that.”

Oh, let it, like the weight off your shoulders. Enormous, okay? Second thing you need to do is, I touched on a little earlier, is question why hasn’t it happened? So was the goal unrealistic or have you been a lazy mofo? Was there an injury? Was there external force? Was there, what was it that has prevented you from doing it, okay? And on that one, it might just be, you didn’t want to do it. You set yourself the goal based on external factors or thinking it was something you wanted or everyone said, “Oh my God, you should do this. It would be so great.” And so you set it, and then you’re like, “Oh actually, no, I don’t want to learn Italian. So I didn’t do it.” Look, that could be part of it, like truly, truly could be part of it.

Then the next thing you want to ask yourself is, what point can you get to? So if you don’t want to let, so I should. Do you want to drop it completely was one of those questions. I missed that one, oops. And then if you don’t want to drop the goal completely, at what point can you get to? How can you reassess? So you’re not necessarily completely letting it go, but you’ve just moved the marker. You’ve like dropped it. So you’re like, “Oh, okay, well maybe it wasn’t a book a week.” Whatever it is, you know? Maybe it wasn’t losing 543 kilos in 12 weeks. Because seriously, people set goals that are that crazy. How can you make it a different one so that you do achieve it? So that do you feel good?

So forgive, let go, ask yourself whether you want to achieve the goal, reassess how you could do it and then make a plan to make it happen. Make a plan to make the new goal happen if you’ve decided not to let it go. And if you’ve let it go, never talk about it again. It’s gone. It’s poof, it’s like magic, okay? But if you do want to attain it, make that plan and set aside the time every single day for whatever you’ve got left in that goal period to get that done. Make it realistic. People, that’s a tough one. Make it realistic. And make it so you feel good. Yes, Amanda, you got to be so kind to yourself. Make it so it makes you feel good while you’re doing it. Why was that so hard to say? It’s like I can’t speak English anymore. Make it so it makes you feel good, because there’s no point if it doesn’t. Setting goals, attaining goals is not about running yourself ragged, so you get to the finish line going. I can’t go anymore. Oh my God. I told you I can’t run five K’s.

That’s not what it’s about. It’s about feeling the way you do it, okay? And yes, I am going to be able to run five K’s at the end of this period, getting there. Loving cash to 5K, highly recommended people. They are my tips for what to do if you’re going for a goal and you realize that yeah, not going to happen. Forgive yourself, get over it. Be kind to yourself, reassess, and make it so you can achieve it, so you are feeling good about yourself. Because that’s all we want. At the end of the day we just want to feel good about ourselves. Mwah, love to you all. See you tomorrow for Friday. Maybe we’ll have Friday drinks tomorrow.

And I’ve got to send out the invitation for the finale party. Yes, day 365 we are going to have a party. And if we’re not in kind of iso, I’m going to invite some of you to join me in real life, having a champers and a celebration. And if you can’t get there for any reasons, we will be doing it on Zoom as well. So, that’s going to be so much fun. Cam, come to Sydney, come, I dare you. Mwah. Bye guys. Have a great night.