[365 Days of Extraordinary] Day 327 Transcript: Q & A What To Do When Your Confidence Takes A Hit

Good evening everybody. Happy Sunday, happy Mother’s Day to all the moms out there, cheers. All the mums, step-moms, the grandmothers, the pet mums, the adopted mums, the non-biological mums and to all those dads out there that have to step into a mum role because of circumstance, happy Mother’s Day to you too. It’s one of those days. I like Mother’s Day but I have found today way bit tougher because I miss my mum a lot, and I know many people are in a similar situation, not just because of death, but a lot of people are missing their moms because of isolation and the coronavirus, they might be in somewhere within online visitors, they might be interstate, there’s a gazillion reasons. So cheers to our mothers.

Now, today, I want us to talk about a question that I’d probably discussed two or three times this week actually. I don’t know if it’s something in the air that’s going on, but what to do when your confidence has taken a knock. And let’s face it, it happens to all of us, happens to the most amazing people, happens to the best of us, and it can happen out of the blue, and it can happen in a moment when you’re really unprepared for it. And you’ve thought with full confidence that something was going to be amazing, boboom, it doesn’t happen the way you want it to happen, and your confidence just takes a dive. And it’s awful. Let’s be honest, there’s nothing nice about that happening. You feel like shit, you do.

So what are some of the circumstances when things like this happen? So it could be something like you’ve gone for a job that you think you’re really, really capable of, more than capable of. You’ve had a couple of interviews, you got really good feedback, you’re in the top two, you’re ready to pop the champagne, and then you don’t get it. Awful. Could be you’ve been on a couple of dates with someone, and you think, “Oh, this is going really well.” And if you’re in your early twenties, you think, “I’m going to be moving in any minute,” all those things that we do in our twenties and we go bonkers. And then they ghost you, and you never hear them again. And you’re like, “Oh, what’s wrong with me? There must be something wrong with me. Oh my God, I must be terrible. Oh my God, what’s wrong?” 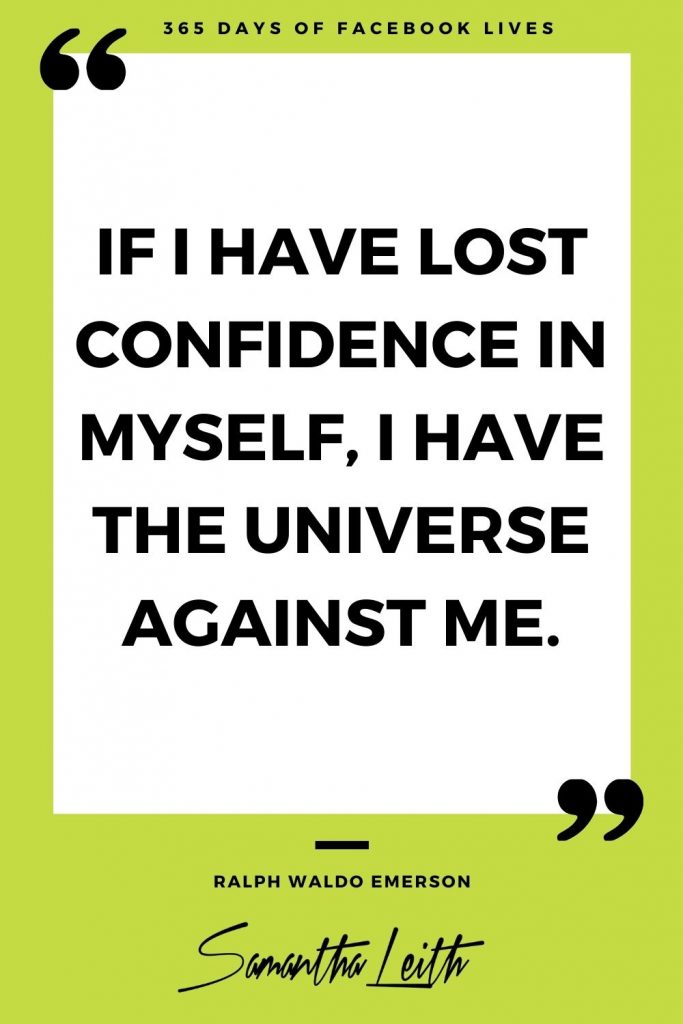 Performer. You go for an audition, there’s a callback and a callback and a callback, and then you see the press release, and some other dude got the job. It’s like, “What?” You an online entrepreneur, and you’ve got what you believe to be a fantastic offer that you want to put out into the world that you think will help so many people. You launch it to great fanfare and then nothing. Crickets. No orders. Nothing happens. You’re an influencer, and you’re like, “Oh dude, I got this picture perfect, this is so good, my butt looks great, I’ve got my leggings all right.” I’m not being disrespectful to influencers, you know what I mean. Some of them are amazing. Do the post, and nobody likes it. And you’re like, “Oh, okay, clearly my ass is too big, clearly. That’s it. I’m done. I’m done, I can never do it again.”

But those moments where you’ve built up into your… You’ve got the prize, you have got your eye on the prize, you’ve caught the price, you’ve accepted the price, you’ve been up on the podium, and you’re like, “I did it. I did it,” and then you do not get the prize, and it is awful. So how do you bounce back? Well, first things first, you have to be okay with feeling how you feel because you didn’t get the prize. It’s okay to be disappointed. You don’t have to pretend that it’s okay that that girl that you have liked for months and months and months only went out one day with you. It’s okay to feel really disappointed. It’s okay to feel really disappointed that you opened a new restaurant and you got two people in on the first night. It’s reasonable, it’s rational, there is nothing wrong with feeling like that. In fact, as you know, I say, there’s nothing wrong with any feeling because it’s how you feel. So first things first, you’ve got to accept that you feel bad because of what happened.

The next thing you have to do is not, and this is where I think we make mistakes, we automatically go to the introspection of, “What did I do wrong? What do I need to fix? Where did I make a mistake? What can I do next time?” And remember, in any of these circumstances, you’re not the only party. So in any of these circumstances, it’s the Instagram algorithm, maybe your picture didn’t come up in many people’s feeds, maybe you launched your brand new restaurant program an hour after the government said restaurants have to close. There are many, many things. So you cannot have the first thing you do be that introspection of, “Oh God, what happened? I’ve got to fix this.” No.

It could be making a cake, it could be calling your partner, it could be cuddling your child, it doesn’t matter. But that second thing you do must be something that gives your confidence muscle an instant boost, instant. It’s got to be like, “Oh yes, that’s right, I can do stuff, I’m pretty good.” You’ve got to have that feeling. The third thing is then to do the dissection of what happened. Again, this is not always what you need to do. Take the dating example. Some people just ghost people. Sometimes you’re chatting with people, and then you never hear from them again. Sometimes you go on a date and there’s no chemistry. Your confidence might take a tumble, but there’s no point thinking about that. You are who you are, so there’s no point in introspection in that.

When it’s a business thing or a friendship that’s been going on for really long and your confidence took a dive in that, or a job interview, anything like that, you can absolutely probably go into that introspective place and look at what happened. And do it from an analytical point of view, not an emotional point of view. So it’s literally like list-building, what went right, what went wrong, wha you think you could have done differently, what you had no control over, because that’s a big part of this equation. There’s so much stuff that goes on that our confidence takes a hit on that we have no control over. So it’s really important that you knock those things out, really important.

And then the last thing you need to do, so step number four, is get back on the bloody horse. So if you had a launch that failed, launch again. If you put up a photo that no one liked, put up another photo. If you went on a date and it didn’t get to second base, don’t know what I’m talking about, go on another date. If you cooked a souffle and it didn’t rise, make another bloody souffle. Whatever it is that knocked your confidence out, do it again, do it again, do it again, do it again. Because it’s in that doing it again that that muscle gets built. That’s the good stuff there.

Step number three is then the introspection, and then step number four on getting your confidence back once you’ve had a nosedive is to do it again. Do whatever it was that knocked your confidence. Even if it was an audition from hell, go to another audition. Go back, go back, go back, go back, go back, because practice makes perfect, yeah, it does, I know, sorry. Now I sound like a mother. Happy Mother’s Day guys, cheese to all of you, and I’ll see you all tomorrow night. I can’t sip and turn phones off and things at the same time. So have a good night, see you tomorrow. Bye.