[365 Days of Extraordinary] Day 329 Transcript: Having The Confidence To Complain

Good evening. Good evening. What’s with the shaking of the head thing? How is everyone tonight? Well, I hope it’s Tuesday. Yay. And the countdown is on to getting to the end of this roundup of 365 days live. I cannot wait till you see what I have planned for afterwards. It’s going to be so cool. I’m so excited. But, ssh, can’t tell you yet. You have to wait, to wait till the big shebang at the end.

So tonight I actually wanted to talk about how to have the confidence to complain. See, we get taught from a really young age that good girls don’t complain, and specifically girls, we get told to… and people are only doing their job and you don’t want to cause a ruckus and, oh, you don’t want to stir and, oh, no, don’t cause trouble. Whatever you do, don’t cause trouble. And it sticks with us.

So things can go wrong or we don’t get given a level of customer service, for example, that we have a right to actually expect in most circumstances, and we do nothing about it because we don’t want to stir the pot. And it’s ridiculous. We have to have the confidence to complain when there’s something to complain about.

Now, I’m not talking about ridiculous, stupid things that people get antsy about. I remember many, many, many, many moons ago, so probably 25 years ago, I was working at Optus and I took a complaint from somebody because a particular movie had been taken off the air that night of Optus Vision because of some circumstances that had happened. It was really inappropriate this movie was going to go ahead, so Optus did the right thing and pulled it. And I remember copping this complaint from this customer, and they were angry, and they were swearing and yelling and carrying on completely inappropriately because Optus had done the right thing. 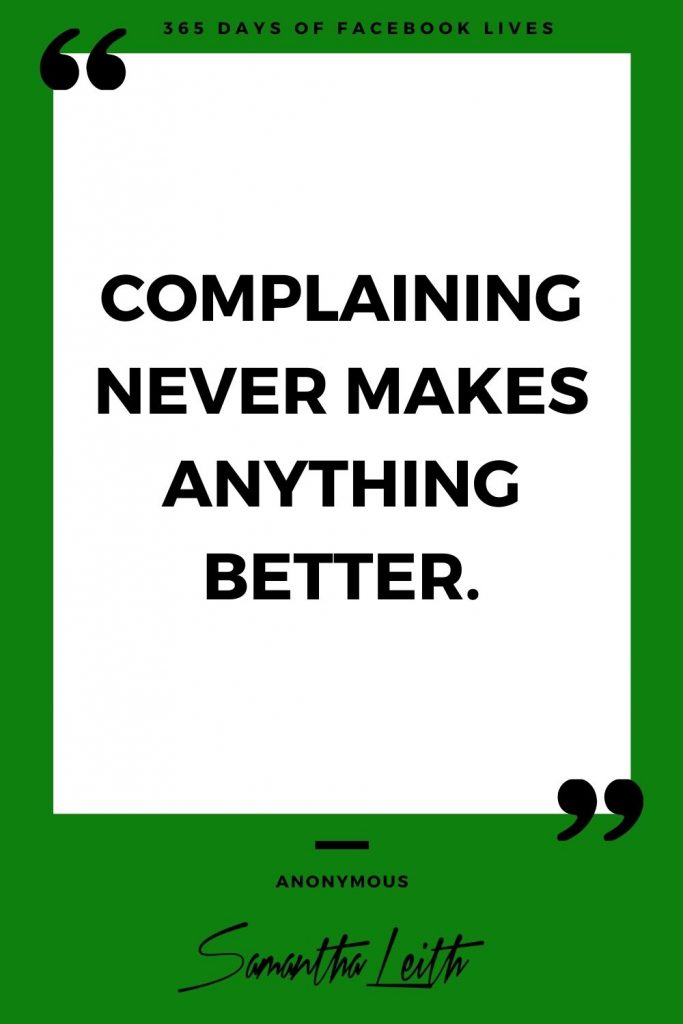 That’s not the kind of complaining I’m talking about. I’m talking about the complaining when there’s been a, in a personal situation or in a business situation, where there’s something agreed upon and it hasn’t happened and someone has let the other party down or there’s been a confusion or service hasn’t happened as it should happen. You know, you order your steak medium-rare and it comes out still mooing. Whatever it may be, if you’ve been let down in a way, you have a right to complain. Especially if you’re paying for a service, you have a right to complain.

You don’t have the right to be a bitch. That’s where it’s not right. Okay? You don’t get to do that. So you have to ask yourself, when you want to complain about something, A, are you doing it for the right reasons? Because if you’re having a whinge or a complaint because of something else going on in your life, get over it, okay? If you’re having a complaint, lodging a complaint, rather, for something that is significant and reasonable, okay? The complaint has to be reasonable. Then you need to have the confidence to be able to do it.

When it doesn’t work is if you become a dick. So quite often, take the restaurant situation for example. Quite often, you might get treated badly in a restaurant because you’ve been an idiot. So you know what? You don’t get the right to complain. So it’s got nothing to do with your confidence, you’ve just done the wrong thing.

Seriously, I used to think like that. I used to not want to complain because I would think they would look me up in the system and they’d go, “Oh, that Samantha Leith. Don’t want to talk to her.” And then they’d like, I don’t know, maybe see me one day when I’d written a book or I was on stage somewhere and they’d be like, “Oh, that’s that woman that complained. Oh, she’s terrible.” No, no, no, no, no, no, no. It’s got nothing to do with that. If you have something legitimate to complain about, complain. But, do it like this. Okay?

First, you have to state what the issue is in a clear, matter-of-fact manner, taking the emotion out of it. Okay? Taking the drama out of it. Because any of that drama or emotion you put into it is the stuff that’s in your head and in your heart and has nothing to do with the actual situation. All the complaint is, is giving advice that something hasn’t happened the way it was meant to happen or the way it was agreed upon happening or the way you assumed it was going to happen. Because yeah, sometimes assumptions come into it and we know what happens with assumptions. So you have to take the emotion out of it.

The second thing you have to do when you’re complaining is, like going to your boss with an issue at work or a question at work, you have to already have a solution. So there’s no point saying, “This is not the salad I ordered,” if you don’t know what the salad you ordered was or what you were actually expecting. Okay? So you have to have the solution.

Third thing to give you the confidence in order to complain is have a timeframe in your mind of when that resolution needs to take place. So, a work email hasn’t been answered. You want to complain about it to your boss because something hasn’t happened properly. You expect an answer within 24 hours. That kind of scenario, okay?

Now, I would generally bring that up the front of the complaint, not leave it to the, “Oh, P.S. by the way, you’re uniforms are really cool.” No, that’s not going to work. It’s like that sandwich effect, you know? Good, [inaudible 00:07:41] good. It’s the same kind of thing.

So, don’t be shy, people. If something goes wrong, let people know. H, have a great night and I will see you all tomorrow. Bye.