[365 Days of Extraordinary] Day 338 Transcript: The Courage To Be Real

If you had told me under a year ago that me, a couple of weeks out from 46, with rosacea, getting a little more glitter in my hair than I kind of like, I would be standing in front of my phone with a tiny little light, talking to God knows who’s watching, in a $10 T-shirt and, actually confession, pajama pants after having gotten out of the bath, having had a peel-off face mask. I love peel-off face masks. If you’d told me that I was doing that, I would have called you an effing nut bag. I would have said, “No way, Jose. I’m Samantha Leith. I like to show up fully done up, outfit, hair, face, et cetera. That’s me, on show. That’s what I do.” 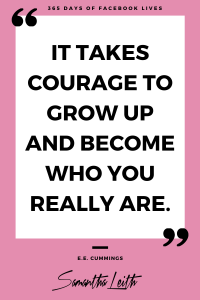 And likewise, no to so many more things than I have ever said no to before. So, get a lesson from me. Having courage is really scary. It is. If you don’t feel like you’re a courageous person, if taking a chance on something, if not showing up perfectly, if failing when you hand something in at school, or getting teased because you didn’t quite fit in, if any of those things are part of your DNA, part of the stuff you remember, it’s really hard to peel off those layers and just go, “This is me. Hi. I’m Sam.” There’s that brilliant song as you know from The Greatest Showman, This Is Me, which I’ve sung at multiple events [inaudible 00:02:48] I have in my keynote, The Sound of Empowerment.

And those lines, I am brave, I am bruised. Brave’s not that easy. I think it probably took me about three months of writing, I am brave, every single day in my journal, till I actually really felt it. It wasn’t until someone said to me, “That was a really brave decision, Sam.” It was like, wow, yeah, that was a little bit brave. Oh, wow. Maybe this journaling stuff works because I’ve been writing it out every day.

Having the courage to be you, which I want to encourage everyone to be, encourage, encourage, is just mind blowing. And it doesn’t matter what you that is. The courage to be me means that you know what? Tomorrow I might go and meet a friend, fully made up, wearing sequins, because that’s what I feel like doing. Not because I think that’s what I have to do because of a situation or a circumstance or who I’m meeting.

The courage to be you means that you get to decide if you want to go to the dinner party or you want to have a bath alone at eight o’clock on a Saturday night, put on a face mask and go to bed, and not care that you’re not doing what you think you should be doing. That’s what courage is all about. Courage is about doing those things that you want to do, regardless of the outcome, because you don’t care about the outcome or the feedback or the result or what someone’s going to say to you about doing it.

Yvonne’s watching it at the moment. Yvonne, would I have ever done a live just out of a bath in a T-shirt a year ago? Hell, no, because I was so afraid to show up as anything other than perfect. And I wasn’t perfect. That’s the irony. We put on this mask of perfection. We think, I’ve got my looks going, I’ve got the [inaudible 00:04:49], I’ve got the heels. I’m doing all okay.

Can’t hear me. I hope people can’t hear me. That’s weird. I’ll turn the… Can you hear me now? Can you give me a thumbs up if you can hear me because that’s really depressing if there’s been no volume on this. Can we hear me?

Can you hear me yet? Random. That’s really weird. Bugger. It was a really good live. I’ll jump off, jump back on and we’ll see what happens.