[365 Days of Extraordinary] Day 341 Transcript: Samantha Leith Manifesto Ditch It, Delegate It, Leverage It, Live It

Good evening. Hey ladies and gentlemen, happy Tuesday night. We’re marching on into winter. Yep, getting out of autumn. The leaves are falling and we’re heading on into winter. There’s a bit of reflection in my glasses. Sorry, but I kind of need them to read. Turning 45. Honestly, I didn’t think I’d be one of those people that needed glasses as I got older. I am one of those people.

I don’t know if … I’m not going to get time to do them all. I might do them in another format. You never know. So tonight I want to go through the ditch it, delegate it, leverage it and live it. Love it. And love it has a lot to do with it. So years ago, when I first started coaching people, I was coaching a lot of businesses on systematization. And one of the things I would help them do is work out if what they were doing in their business was worthwhile. Like, did we need them to be doing something else in their business? Was there something we could remove? Something we could add to make them more productive, make them more money, etc. And it was based around four questions. Does this make me money? Does this make me time? Does this cost me money? Does it cost me time?

And then the number five question, which is like the big one, do I love it? Like, do I love it? You can’t see it, but there’s like a little matrixy thing. Ditch it, delegate it, leverage it and live it. And we’d go off the axis and go, “Well, if it’s fitting into one of those, I need to leverage it, live it, love it, etc. So I’m going to talk about how we work that out.

What I would get my clients to do, and I encourage … When I started this, it was primarily about business. But over the last … As my life has morphed and I’ve done more personal development and life coaching with people, I still use this tool today with people on their lives. So what I encourage my clients to do is keep a score. We don’t like to say, but we keep score on many, many things. 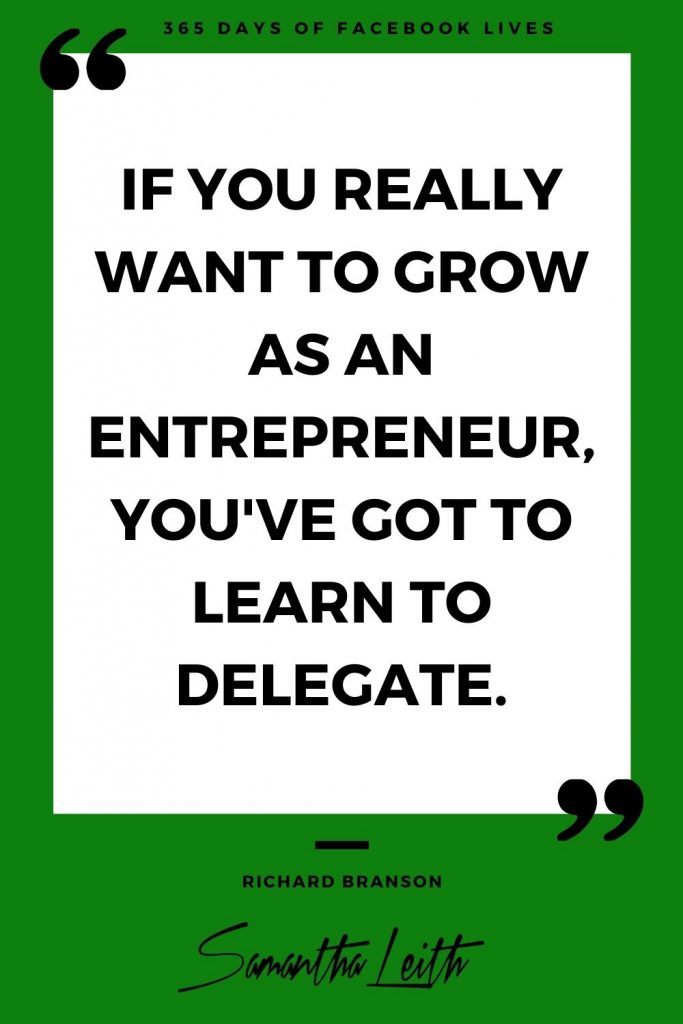 So I want you to keep a score on the stuff you’re actually doing in your life. You can do it in a journal, you can do it on a fancy spreadsheet. You can send me a message and I’ll send you the template, whatever floats your boat. But what I want you to do is every task you do through the day, from running for half an hour, to doing a social media post, to doing the dishes, to re-designing your business cards, to spending an hour on Pinterest coming up with your dream kitchen. Whatever it is, I want you to write down the time you spent on it, what the task was, and then I just want you to say whether you loved it or loathed it. Did you love it, or you loathed it?

And then in the next column, I want you to write whether it costs you money, or it made you money. And then the column after that, did it cost you time, or did it make you time? So you need five columns. Got that? Five columns. I’ll put a link after this so you can all get the worksheet, because it’s a bit hard to just visualize. If you’re a visualizing person, you probably got this down pat. Me, I’d be like, “No, I need to see it in front of me.” I can’t work it out. That’s how my brain works.

So, the ditch it part. If something is costing you money and costing you time, that stuff’s got to go. Get rid of it. That is the king of ditch it, baby. You do not want that stuff in your life at all. And that’s the thing, it’s the stuff we waste our life on. And a lot of it’s ego based. Oh, you can see the little wingy lights. Can I still see that? I can still see that? Is that less annoying?

Okay. Sorry. That reflection was doing my head in. A lot of the things, when we’re not making time or money, it’s ego based. It’s procrastination. There’s stuff like fear of success, fear of failure. It’s loss of control. It’s not planning stuff. It’s inability to just do stuff that actually has to get done, so you concentrating on filling your space with stuff. And that stuff is not making you money or making you time. And in both life and business, we want to be doing both of those things. So things you want and get rid of are like, social media, television. At the moment, I’m watching a bit of TV. Over-planning, over-handling stuff.

You know what they are. You do know what they are. You do not need to alphabetize your chicken noodle soup. You know what I mean? So the delegated stuff is where it’s making you money, but it’s wasting time. So you want to give it to somebody else so they can do it for you. And again, it’s the same stuff that comes up. Fear of success, fear of failure. You might have a scarcity mentality, so you think you’ve got to do it all yourself. Take a cleaner, for example. Cleaner is a delegation and it is one of the most freeing, bestest … I know that’s not a word. Bestest use of your money is to have a cleaner, by far. One of the first things you got to get rid of. Again, like a system, stuff like that. Delegating is not a dirty word.

Then we want to leverage things. Again, this is when you’re wasting time, but you might be making money out of it. But, you’re spending too much time doing it. So again, systematization, that kind of thing. Again, it’s a home thing that, “Ah, making money.” If you can spend that time making money doing something else, then you set it as something you want to be able to leverage. At the moment, for example, meetings. Oh, my gosh. Now we’re all doing these meetings by Zoom all the time, instead of having to get in cars, get on public transport, go places. Talk about leverage. Brilliant. Will we ever go back to those crazy long-winded meetings? I hope not. Products can be leveraged. The software that you use, your phone. There’s so many tools you can use to leverage your time and your money. Promise you.

And the live it section, this is the bit that floats my boat. So the live it is the stuff that’s making you money and making you time. And you really enjoy doing it. So for me, for example, there’s lives. Live it. That is absolutely living it to me. For me, when I get up on stage at a conference, which I’m not doing at the moment, absolutely living it for me. For me, when I’m on a Zoom call with a client and I’m helping them through a problem, absolutely living it. That is the dream. They are the golden moments where time, money, and passion all come together. And that’s what we want in life. That’s the stuff we want to be doing more of.

So if you’re looking at your personal life in terms of this, there may be some social aspects of you that are a networking thing, that might fall into that live it category. And business networking might be one of it, if you do it well. Some live it things for me … Planning. I’m a planner and planning for me is part of that live it quadrant, whereas for other people, planning might be a complete waste of time, energy, and effort. It might’ve been in that loathe column, and somebody else has got to do that stuff. They’ve got to, got to, got to do that. So the live it part is when you’re absolutely in your A game, your element, as I said. And you know what they are, you know what that A game is.

That’s that moment when you’re living that X factor thing, as well. Everything’s effortless. It’s when you’re in flow. And I know flow has been one of those words that has probably been taken a little bit too far by some people over the years. You never know. But, I do believe that flow is when you’re with your family and hours go past and you’re like, “Oh, what happened to the day?” I didn’t really realize all the day gone. That’s brilliant. I was in flow. And in a workplace or in your business, you’re sitting at your computer and you’re writing your book. And before you know it, you’re three chapters in and it’s like, “Ah, people have got to read this.” I had no idea I was sitting here for five hours. Wow, I didn’t even pee. That’s fricking awesome. That’s flow.

That’s the living it bit. That’s your A game. So again, I’ll go through the five things. So you want the column to have what the time was that you spent doing something, then you want to have what the task was, then you want to have did you love it or did you loathe it? And that’s a bit of a tongue twister. Then did it cost you or make you money? Did it cost you or make you time? Again, send me a message or I’ll put the link in, and we’ll get that worksheet out to you. Because I do think it’s really, really valuable to look at where you’re spending your time, where you’re wasting it, and those beautiful moments … For some people, Pinterest, for example, might be a complete waste of time and a complete waste of money. For the next person I talk to, Pinterest might be a complete waste of time, but makes them a crap load of money. Or, Pinterest just lights them up.