I’m feeling human again. Yay. I’ve actually been up and about and done stuff today, which is great, and I think I’ve got a little bit of my sparkle back.

Awesome. I’m back on the program of what I have wanted to talk about.Tonight I want to talk about forgiveness. Forgiving, I talk a lot about courage and forgiveness is something that takes an incredible amount of courage and often makes absolutely no sense whatsoever. Someone hurt you. Why the hell should you forgive them and all that? Why? Really? Sometimes it’s completely illogical, but there’s many reasons why you should. One quote you’ve probably all heard, I won’t quote it actually, it’s something you’ve probably all heard. Not forgiving someone is like a poison that eats away at you. It does nothing to the other person whatsoever.

For example, I … Hello. I hated my father for very many reasons, a lot I couldn’t articulate until I was probably about 28, 29, maybe even pushing 30 when I looked at his life and his situations and truly forgave him for a whole lot of stuff. It made the last few years of his life, our relationship in the last few years of his life fantastic. I wish I had done it earlier. I really, really wish I had looked at his life through a different lens a lot earlier. I’m pretty big on forgiveness now. I try and probably have it in everyday life.

Actually, there’s a really good vision from Mindvalley. It has a great meditation that incorporates forgiveness daily, which I could do quite often actually. It’s called The 6 Phase Meditation. It’s on the Omvana app if you do get a chance to look at it. It is a really good one. 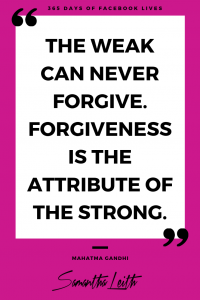 Why should you forgive someone? Well, it ends resentment and anger. It eases the load on your shoulders and in your heart. It gives you peace of mind. Some say forgiveness is the best revenge. Some people say success is the best revenge. I personally don’t think revenge is a reason for doing anything, but some people say that. A big thing it does is it stops a person or a situation having control over you. Once you’ve forgiven the person or the situation, that control is gone and that’s a really big thing. It heals relationships. As I mentioned with my father, it really healed our relationship. I think forgiveness is like a big jab of personal development in your ass. It’s a just a boost up, which is great.

First thing you’ve got to do, is to get good at, is forgiving yourself. We’re probably the worst of this than we are at forgiving other people. We can hang on to so much. I’m an idiot. I’m stupid. I did this. I fucked up. I blah, blah, blah. There are voices in our head. Forgiving yourself for any of this stuff that you’ve done or you’ve said or how you’ve hurt someone or a situation you possibly have been to blame in, to forgive yourself for that, numero uno.

I’m going to go through some steps on how to forgive, and then I encourage you to do that for yourself and look at something that happened today or this weekend that you think you need to forgive. You’re holding on to a bit of shit about. Firstly, look back at things that you’re holding on to for you. It can be a big … Let’s take a whole weekend with a bottle of wine. Wine doesn’t fix it. It makes it easier though. First point, unless someone is a true narcissist or sociopath or psychopath or something like that, they probably didn’t mean to hurt you. They really didn’t. It’s not a natural instinct for people to want to hurt someone. Sometimes it’s just something goes terribly wrong.

Look at the situation through their eyes. Was there a part that you played in that situation? How did you handle something? What did you say? Own your involvement in what happened in that situation and what could you have done differently in that? Even if it’s as simple as you need to forgive the waiter where you got brunch this morning because something didn’t arrive on time. Were you too busy chitchatting or on your phone or whatever to give them your order properly? It can be little like that that you actually had a part in that situation. You need to look at that and own it.

What did you want from this situation? In split-second timing, in every situation, we are working with what’s actually happening in that situation, as well as us still feeling or knowing what we actually want to be happening in the situation. They’re both things happening at the same time and then it goes into the past meter. What has happened versus what you wanted to happen? What did you want? Hey. What did you want from that situation? Did you have unrealistic expectations for that situation and therefore, there’s nothing to forgive because you know it ain’t going to happen? When you’re looking at it through their eyes, is there anything going on in their life or with them personally, physically or anything that could have contributed to what happened on their part? Because it helps to look at that.

Ask yourself, and this is a tough one, was there a time when you’ve acted in a similar way or hurt them? Because chances are, you have. The hardest things to forgive are the ones that feel like we’re looking in a mirror at them because it brings up so many of our own … how we feel about our own defects of personality. Be really honest. Is there something you did at some point that was pretty similar? If so, you probably need to forgive yourself for that before you can move on and forgive someone for this situation.

This is daggy. I know it’s daggy, but it does work. You want to say out loud or write it down or … In meditation, it does work, but out loud is perfect. Say you forgive them. Verbalizing it does put it in here more. You want to …

Also then I recommend journal about it or tell someone about it. What it was in the situation that you reacted to? What got you so angry? What caused that weight on your shoulders and that resentment? What was that poison? Once you can write about it or talk about it, it also helps free the situation and makes the forgiveness more cemented. Forgiveness has to be palatable to start with, so you’ve got to put it in the context of how you can deal with it. Once you have forgiven them, getting it out and knowing exactly what it means, you’re probably not going to react the same way in a similar situation. The first time your heart is broken by a lover, once you’ve digested all of that and worked out what went wrong, what went right, the next time it happens, the pain is not so great. The same with any situation that you need to forgive.

Lastly, you’ve got to let it go, let it go, and move on. Get the F over it. A situation has happened. You’ve dealt with it. You’ve looked at it. You’ve forgiven and let it go. That resentment never comes back to haunt you. Do not be one of these people that turns around in six months’ time and goes, “Remember when you did X, Y or Z.” That makes people not like you. Do not be a history buff on that kind of thing. Let it go. Get rid of it. Good riddance to bad rubbish. You’ve forgiven them. Your heart is full. You’re over it. Let it go.

There I’ve told you 10 tips or 11 tips. I think I did 11 tips. Oops. Okay. What part did you play? What would you have done differently? Look at it through their eyes. What did you want from the situation? Is there any time in your life when you’ve been that kind of dickhead? Decide that you want to forgive them. Send them and the situation some love. Forgive them. Journal that out, and let it go. They are my tips for forgiveness. I promise you, when you learn to forgive even the teeniest, tiniest things, it can happen really quickly and you move on and you’re so much happier for it and so much better.

Happy Sunday. Have a great night. I’m doing lots of hand stuff tonight. I have got my energy back. If you are reading my Facebook post today, I said I had 20 things on my to-do list because I was feeling better. One, two, three, four … seven of them are yet to be done, but that does include have a bath, read my book, and go to bed. Only four actual things to do haven’t been done. I’m feeling better. Yay. Have a great night.