Cheers, happy Friday everyone. Just a little sip before I start My Live. I get again, today I’ve had the great fortune of having a catch up with friends at five o’clock with a wine on Zoom, which is, you know what? I think if we all go back to doing everything out and about with people, I think I’m actually going to miss those little Zoom catch ups. So I hope many parts of everything we’ve gone through over the last few months actually stay because I think some of those things are really cool. These conversations, I wouldn’t have taken an hour out of my day five months ago to probably have the opportunity to have wine with these women. And yet we’re doing it regularly. Friends I haven’t caught up with for ages and ages we see each other at funerals and weddings and really big birthdays and we catch up every week.

Like it’s brilliant, it’s really brilliant. So I hope stuff like that stays. Anyway, that’s not what this Live is about, but the clarity of one, I wanted to talk about clarity within communication. So there’s a great saying that clarity is power and I’ll look, there’s a whole lot of sayings about something being power, but with clarity, it really is true. And all we’ve got to do is go back to your childhood and remember having conversations with your parents or your siblings about something that needed to get done, or something that didn’t get done, or somewhere you were going. And it wasn’t quite clear and it always goes pear shaped. If the clarity is not there, it’s going to get a bit manky at some point because someone won’t have their needs or their wants met because that clarity wasn’t communicatable. And we think people are mind readers.

I think, especially in parents, we can kind of say something to our children and it’s like we get shocked. I didn’t know exactly what we meant or with partners. You can say something and sometimes it’s like you’re speaking in a totally different language and you’re all frustrated because, oops, why didn’t they know that the garbage had to get taken out? Because you didn’t say, I need you to take the garbage out. You said garbage is on Sunday. And we randomly think that they’re going to understand exactly what we mean. Okay, I know there’s simplified examples but they’re the kind of examples that affect us every single day when we’re not clear and we don’t have total clarity about what we’re actually saying. 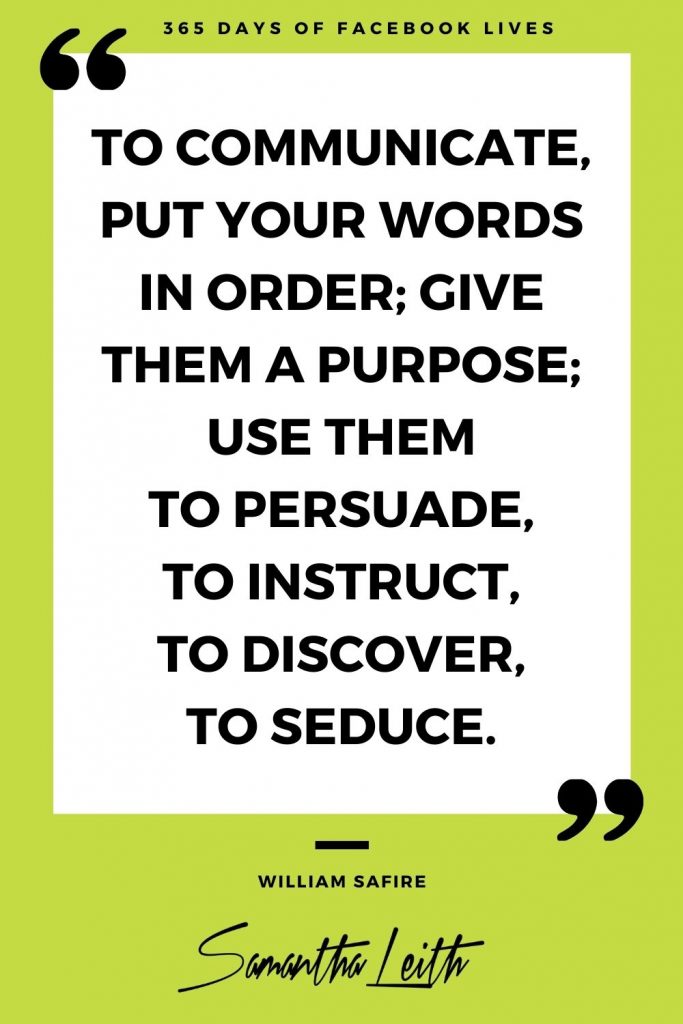 Okay, we need, need, need, need, need to have it because communication is like a dance. It’s like, you say something and then the other person listens and they respond to come out with something. And then it doesn’t really work doing it this way, does it? And then you listen and then you think, and a response comes out of you. So it’s like the circle that just goes round and round and round and round and round. And that can be communication like this chatting chat, chat, chat, chat. They can be text or don’t get me started on clarity of text messages. That’s a whole other problem. Email, letter writing, any of these. There’s so many ways we communicate. There’s silent communication. That’s a lesson in itself. But within that dance of communication, it’s really important that the clarity is there, otherwise, you’re going to fall off or trip on each other’s feet. Okay. So, you need to be clear about a few things before you start communicating. And this is not just like having a chit chat. This is when there’s something that really needs to actually get across.

I should have come up with an example before doing this. I’m not sure what I want to do for my birthday. And you really in your gut want someone to go, how about I take you out to lunch. If you’re clear on that, you’re not going to communicate it well. Okay? That’s that back to that wishy wishing wishy-washy thing. So again, it’s who you’re communicating with, what you want or need to communicate and the response that you want or need, okay? Then there’s really the things you’ve got to be really, really, really, really, really clear on. Then there’s a couple of things we’ve got to know. You’ve got to not assume anything within the conversation. We’ve all heard the saying, don’t assume, it makes an ass out of you and me. We don’t want to do that. So don’t make assumptions. Okay? They’re just, and it’s a really hard thing to stop doing.

We all naturally make assumptions. We make assumptions based on something that’s happened before with the person within the way of communicating with. We make assumptions based on what we think they might do in reaction to usually how we’re actually acting not what we’re saying. Parents, for example, do that great guilt thing where it’s not about the words that are coming out, it’s the guilt meaning in the language and the poison, the little undertones, what’s between the lines. That’s what we make an assumption with. That’s a really, really big one is the what between what’s between the lines rather. Okay. So we’ve got those three, who you’re talking to. I’m going to go over it again, what you want or need to say and what you want or need as a response. Then there’s a couple of tips that are going to help you take those three things and make what you’re saying even better, more clearer, much more clearer.

That’s the technical term for it, much more clearer conversation. So we’ve got to avoid jargon. Yes, oh my gosh, if you worked for a big corporate in the ’90s, we all had looking for really big book, big manuals of, oh God. It’s for this team, it’s for that team, all these acronyms for everything. If you’re trying to communicate clearly, do not use jargon, no acronyms, no technical terms. If you’re like me and your into personal development, big time, there’s a lot of conversations I have with people where I might want to throw in a phrase or something I’ve learned over here in the spiritual health self-help world. And it’s going to mean absolutely jarg to the person I’m talking to. And it’s not a case of dumbing it down. That’s really insulting. That’s not what you want to do.

You actually, I think, want to up-level your conversation to remove the jargon. I think a lot of the jargon is where it gets dumbed down. So change what you’re saying in order to communicate clearly. Held, hey Sarah, you do not want to use jargon. It drives peoples insane when you’re trying to have a clear conversation. Okay? But on that, you want to keep it simple. You know the acronym, keep it simple, Samantha. Jargon, I did it, see? But if I said to you in a conversation, you just got to kiss it. Someone’s going, what? I just met you. Why do you want to kiss me? Because they don’t know that means, keep it simple, Samantha. I don’t like the other one. If you’re trying to communicate something clearly, keep it simple. Okay.

And the last bit of that. So this number six tip in that is you want feedback on what you’re communicating. So there’s no point saying, so lunches on Sunday at 10:00 and then you leave. Okay. So you’re clear about lunch being on Sunday at 10:00, pretty early lunch but early blunch. Where’s lunch? Who’s going? What’s the purpose? Any number of questions could be on the back of what you’ve just said. So you need to wait when you’re talking or communicating about that, to have that feedback of, oh, maybe there’s more questions. I might not actually understand exactly what you’ve said. So I need to keep that dance of communication, that listen, understand response, listen, understand response. I need to keep that going until I understand fully what’s going on and then we’ve communicated. Okay? Simple. Simple.

So there you go. There’re my tips for better clarity within communication. I know I talked about kids and guilt trips and all that kind of thing but we communicate every single day was so many people, all levels of life, all from people in restaurants, to Uber drivers to our team mates, to people we want to work with, to leaders, to everybody.

And the basic rules are those. They are the same things you need to think about no matter who you’re talking to. Okay? So what are they? Let’s run over again. What do you want to say? Who were you talking to? What response do you want or need? And then we want to avoid the jargon, keep it simple, and we want to wait for that feedback loop so the response, so we know it’s been communicated effectively. There are so many more other tips for clarity within communication. So I’ve tried to keep it simple for Friday night.

Have a great Friday night and if you haven’t already, I can see some of the names watching and I know you have registered, so it’s going be so much fun. What are we going to wear? If you haven’t already, here is my clear directions for you. Head over to samanthalee.com/365, the number, days, and get on the list for the last night. It’s going to be fun. Have a fabulous weekend. If you’re in New South Wales or I think the ACT as well, it’s the Queen’s birthday, what’s not really her birthday, talking about bad communication. Not even sure when her birthday really is, but we get a long weekend this weekend. So if that’s you have a great time and if not have fun at work on Monday. Bye.