[365 Days of Extraordinary] Day 352 Transcript: Courage Can Be Built On Small Steps

It’s cold. Hi. So I hope you missed that two seconds of conversation with [Elody 00:00:05]. Happy Saturday night. It’s a big day in the Leith world. No, not really. Normal Saturday. Yeah.

So how did we do that? Well, again, it’s not a big thing. We can sometimes think, “Okay, I’ve got to be more courageous. I’ve got to feel the fear and do it anyway, so I’m going to go and jump out of an airplane.” No. No, no, no, no, no, no, no, no. The smallest of courageous steps will help you build your courage. The smallest moments of facing fears will help you face bigger, and bigger, and bigger fears every single day. Just like that confidence thing I talk about, where you do one little thing to boost your confidence, and then it’s another thing, and it’s another thing, and before you know it, you’re not the person you were looking at six months earlier. Courage to me is exactly the same way. 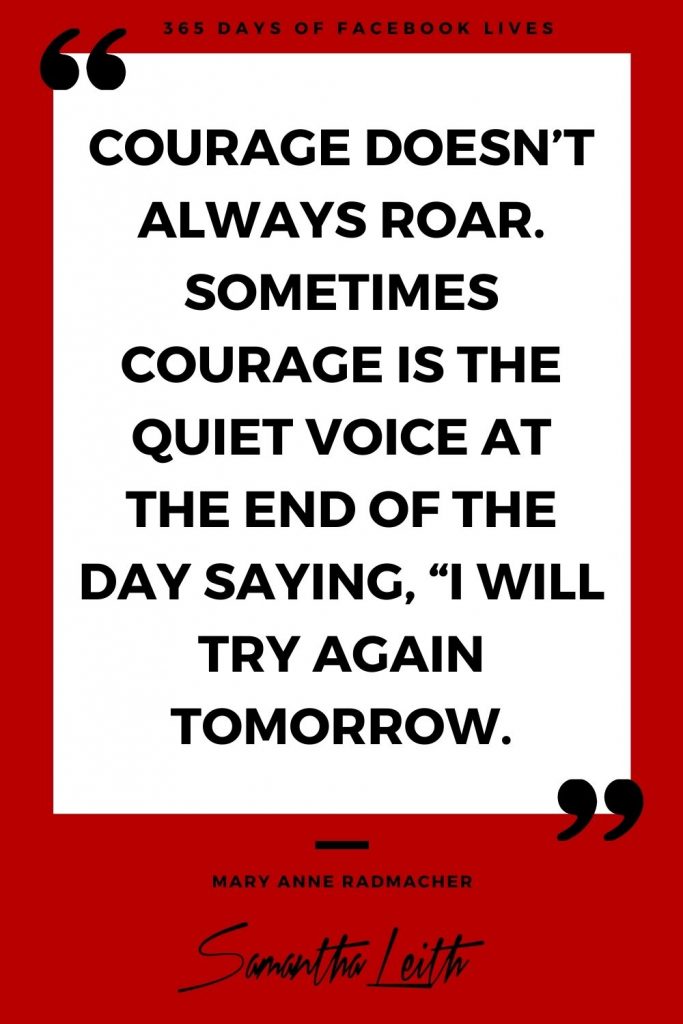 What are some things that we can face that might be we need a little bit of courage, that we don’t necessarily want to do, but will help us build that muscle? Pick up the phone. Pick up the phone and call someone that you think, “Oh, maybe I should’ve called them. I’m feeling a bit guilty because I haven’t called them for a while. Will they still want to be my friend?” That’s a really good one to start, because you know what? If they’re a real friend, the fact that you haven’t called them for while won’t matter. But the fact that you got yourself into the position where you could call them, brilliant.

Another one that’s not so hard, but you might go like, “Oh, I don’t know if I want to do that,” is, bare with me here, eat something you really don’t want to eat. By that I mean, you might want to try an oyster, you might want to try liver, you might want to go vegan for a week, you might want to start having your coffee black. Well, just try a black coffee. You may think, “Oh, there’s that dish my partner’s been wanting me to try because they really like it, but I’m like, ‘Ugh.’ Okay, I got to give it a go,” and give it a go, because the worst thing that can happen in any of those little ones is not that bad. Quite often we’re too scared to be courageous because we think what the worst possible outcome is, is just horrific. 99.9% of the time, the worst thing that’s going to happen by eating an oyster that you really don’t want to eat is maybe the oyster wasn’t that fresh and you get a bit of a tummy upset, but it’s not going to kill you.

Jumping out a plane, 99.999999999% of the time, planes are really… Parachutes all work perfectly, and nothing’s going to go wrong. It’s the fear that you’ve created in your mind, that is the issue. Picking up the phone, if they’re not a real friend and they go, “Oh, fine. Don’t want to be your friend anymore, it’s taken you six months to call me. No, that’s it. We’re over.” Well, you know what? There’s the door. Bye Felicia. We make them out to be so much bigger than they are. Fears are created in here, that they’re really created internally. Whenever we have those fears, it blocks our courage and we then go, “No, can’t do it.” Like building the muscle of courage or confidence, the more we don’t step into it and face it, the weaker that muscle gets.

So I was reading a book and listened to a podcast. I’ve done a whole lot of stuff on this woman… Oh my God, I’ve just forgotten her name. Oops. She has a website called Hello Fear, and she set herself this challenge of doing 100 fearful things in 100 days. Which my life movement, my 365 days is like, “Oh, what were you thinking?” It took her a little bit longer than the 100 days because she did some things that were a bit longer. She did things like tarantulas, moved cities, went away for a weekend by herself, which to some of us, to me, it’s like heaven. To her that was really, really scary.

I’m not saying, go do that. All I want to encourage you to do, is to look at what you’re being afraid of, on the simple ones, because I promise you if you can knock out 10 of those little itty-bitty fears in the next few days, you will do something incredibly courageous before the end of the month. You will. You will, because you’d be like, “Oh, I got that.” Why that accent? I don’t know. Sorry about that. I do random things sometimes, sorry. You will. The more little bitty-itty courageous things you do, the big ones will just flow and they’ll get easier. So I just want to encourage you over the next 24 hours, 48 hours, take a week, take a month if you want, to write out a list of some of the little things that you’re like, “No, don’t want to do that. No, I’m not putting pepper on my sandwich,” and do it.

Have a great Saturday night. Don’t forget www.samanthaleith.com/365days, that’s the number 365 days, and register for the final night party, because it is going to be a blast I promise. Have a great night. And I will see you all tomorrow. Bye.