Good evening. It’s Sunday, yay! End of the week. Well, long weekend. So is it the end of the week? Or is it halfway through the weekend? Who knows. Q & A Sunday. This is what I do every Sunday. And I take it off the back of something I’ve either been asked or a conversation I’ve had where questions have come up. Sometimes it’s a bit of a teaching point. Sometimes it’s a little more random. And today’s Q & A is brought to you by myself. The question today is one I have been asked, can’t actually tell you how many times over the last 50 odd weeks, 51 weeks to be exact. And that is, what have I got out of this? What, out of this whole 365 days process, what have I got out of it? And there are so many things I’ve gotten out of it, so many things.

I used to say to people I was afraid that when I died, on my tombstone, it would say, “Here lies someone that almost” because I had built in my mind that I wasn’t a finisher, that I would start things and not finish them. And if anything, this is one of the things this has shown me is that I’m a finisher, I finish stuff. And that’s, I see things through, I follow things through, and that’s been really, really great. 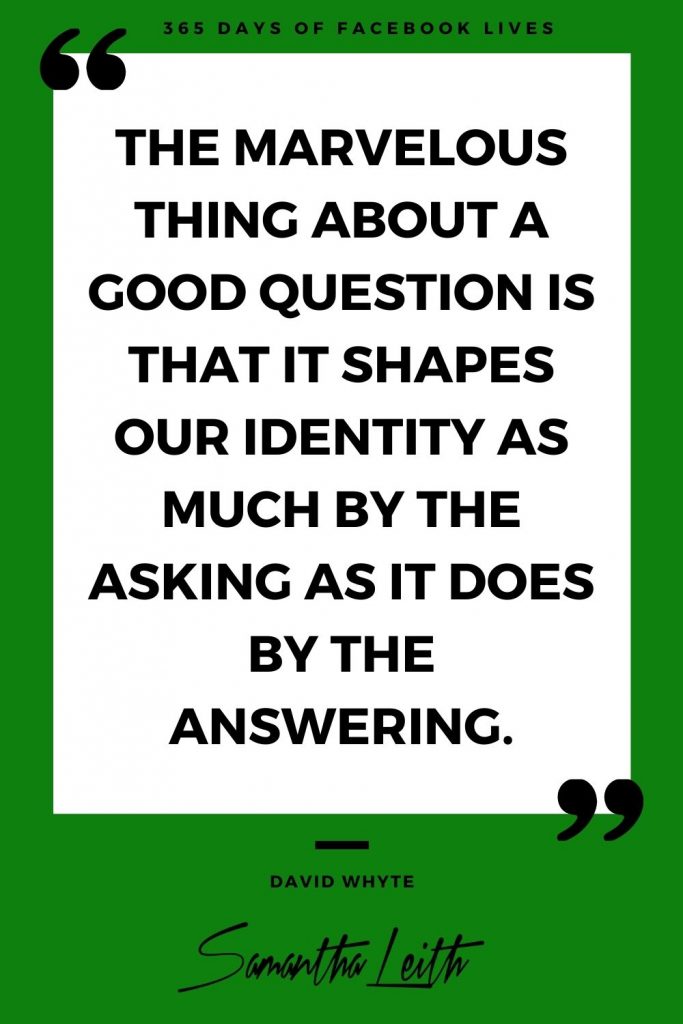 The third thing that I got out of this is, you know what? I can just show up. And that was such a sticking point for me, that although I was confident, I thought I had to do the something before I did video within my business. And this has proven to me that I don’t, there’s actually good stuff up here. And it’s the stuff that’s up here and the stuff that’s in my heart that I project that I do, that’s important. Not necessarily what I’m wearing. Although sometimes, don’t get me wrong, I do like to frock up and do my life. Not tonight because I’m really cold, and I haven’t had makeup on all day. And you know what? Don’t judge me. It’s okay.

And the number five thing that I’ve gotten out of this, is actually… Not so much what I’ve… Well, yeah, I got out of it. Is showing my daughter the importance of when you say you’re going to do something, doing it, rain, hail, or shine. Maybe there was a one night I had a migraine. There’s been a bit of a hiccup we think with the numbers, because I should technically finish on the 16th, but the numbers are skewy. So we’re going to sort it out, because I’ve definitely done it every day. Apart from the first one where I forgot to save it.

So the most common question I’ve been asked is what did I get out of this. And it’s all about me, which is ironically not what the lives have been about, but what I’ve gotten out of it has been so, so much. Would I do it again? I wouldn’t commit to 365 days of Facebook lives again. Holy heck, no. However, it’s made me really consider what I’m going to do for the next 365 days.

And I have a couple of things on my list that I’m looking at doing, because I think, why not? We show up for ourselves every day, doing things like washing our faces, cleaning our teeth, having a showers, sleeping, all those things that we do every day. So why not do something that’s actually going to… Those things are all good, but why not do something that’s going to up us even more? So set myself another challenge. It won’t be like this, but it will be something equally beneficial to me, because it’s going to tackle something else I’m equally fearful of. So if you remember when I started this process, it was the whole showing up as myself thing that was a bit nerve wracking. And that was a fear, and I built the courage by doing this. Remember what I talked about last night? Courage with the tiny, tiny steps, just doing something every day to help you get more courageous. And this has absolutely done this for me.

So the next thing I tackle is going to be something else I’m fearful of. I’ll share it in the last live, I’ll share what I’m going to do for the next year. And I’m going to keep this going. I think 365 days of extraordinary, we can all do it. We can all pick something and say, “I’m going to do it every day for the next year.” Because you know what? A year is not that long. It’s really not. You think, “Oh my God, it’s a year. It’s going to take me forever.” We’re in June, it’s halfway through the year, people. A year is not a long time. So that’s it, that’s what I’ve gotten out of doing these 365 days. And for everyone that’s messaged me that question, for my friends that have asked me that question, for people within business groups I’m in that have asked me this question, all I can say is, I’ve got an inordinate amount of stuff out of it.

And I encourage all of you to think of something you can commit to for the next year. Go for it! I probably wouldn’t do 365 days of Facebook lives. Do 365 days of IGTV. I might have to tackle that next.

Have a great Sunday night. Stay warm and toasty and dry, because it’s raining at the moment. And don’t forget to go to SamanthaLeith.com/365days, with the number 365, and sign up for the last party. And we’ll have some champagne and fun on the last night. Stay safe and I’ll see you all tomorrow. Bye.