That’s bull. We all get angry. People get angry. Stuff makes us get angry. Something could have happened in the traffic on the way to work to make you angry. It could be a hormonal thing that makes you get angry. We all do it, and it’s just like any of those other feelings that we have, those emotions that come up. We just need to learn how to deal with them.

Anger is not scary. Anger is only scary if you don’t know how to deal with it, or you refuse to acknowledge it and look at it, and then it’s like a pressure pot cooking. You know, like one of those pressure cookers that your mother had and it’s sitting on the stove and the bubbles are going at the top and then it all it kind of explodes. That’s what anger is like if you don’t actually look at it. So I wanted to share five of my tips for dealing with anger, because you know what? It’s going to happen. 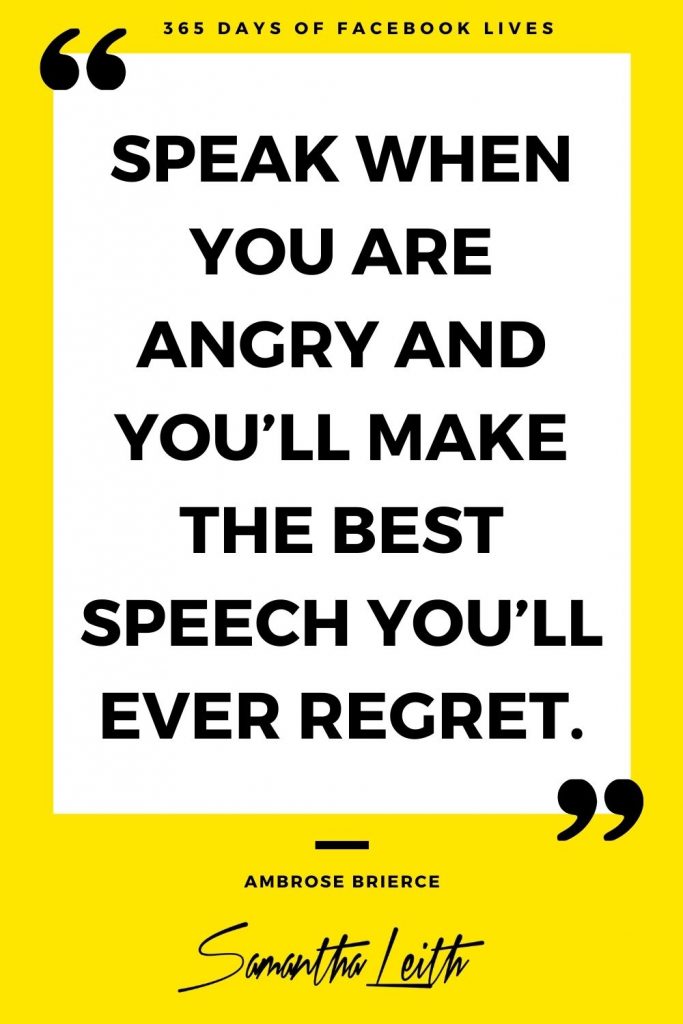 The second tip I’ve got for you is that beautiful bounty of mindfulness techniques that I’ve talked about probably 300 of the 365 days that I’m doing this, and those mindfulness techniques include things like journaling, deep breathing, walking in the fresh air, meditation. Another couple of things that you could tag onto that if you’re in an angry situation, counting to a hundred. That is one of the simplest meditative techniques you can actually do. Don’t do the 100 green bottles of beer on the wall. 100 green bottles of beer. Don’t do that. Just count to 100, and that will actually slow your breathing. It will make you breathe, it will slow your breathing, will get you oxygenated, and it will actually start you focusing on something else, which will help reduce the anger.

The third tip for when you’re in one of those angry moments is engage your brain before this moves. Okay? Engage your brain. So quite often when we’re in an angry situation, we can just go, “But you, blah, blah, and if you haven’t done this…” All that stuff comes out before we’ve actually thought about what we want to say. And we all know there’s two sides to every story, actually there’s three, but I’m going to go into that on one of the other lives before we finish this, is you got to think. Okay? Use ‘I’ statements is often as you can in these kinds of situations. So I feel, I found, I think. Take the ownership back onto you in some of these situations, if you’re acting from a kind of space. That’s if you have to talk. I would avoid talking at all until you’ve calmed the you know what down. So go back to the mindfulness, breathing, et cetera, before you actually talk and engage your brain.

The number four tip is you want to probe, you want to investigate, you want to think about why you’re angry. Why has this happened? As I said before, it could be that someone gave you the finger when you’re driving to work. It could be that you’ve only had two coffees and you’re a four coffee a day kind of girl. There could be lots of reasons that aren’t just the fact that that narky email came in. Anger is one of those emotions that…

I’m going to go back to the muscle analogy. That’s so funny. You’d think I was a bodybuilder. It’s like we have a limit and a little thing could have made you feel a little bit tetchy, but not much has happened. And then something else has happened. It’s like, “Oh, I’m a little more tetchy.” Then something else has happened and it’s like, “Well, I’m a bit grumpy now.” Something else happened. And you laugh it off. You go, “I’ve got my grumpy pants on.” Then that last thing happens and it’s like, “Oh, I am angry. I am angry now.” So we want to investigate what’s happened, what has made you angry. What are those things that have built to make you go, “Grr,” before you explode? Okay. Because it’s never pretty like those cartoon explosions where you’re grumpy and your head goes… So don’t explode. We’ve got to be able to deal with anger, because we all have it.

My number five tip for dealing with anger is exercise. Actually, I meant to bring my boxing gloves in. Exercise. Honestly, getting aggression out in the form of exercise is a game changer. I remember years ago when I went to my very first boxing class, and I love boxing, I was like, “Oh my god. This is fun and I’m getting this aggression out that us girls aren’t meant to display.” Awesome. Just incredible. For me, boxing is the exercise that makes me go, it’s a release exercise. For other people, it might be pounding the pavement. For other people, it’s smashing a tennis ball, but that physicality is a really good way of dealing with that anger energy.

So there are my five tips for dealing with anger. It’s not that hard people. First, acknowledge it. Second, you want to think of all those mindfulness techniques that I talk about till I’m blue in the face. Third, make sure you engage your brain before anything comes out. I should actually say think before you type too. So think before you speak or you type, because it’s really important. Quite often in the heat of the moment an email can go back and then you go, “Oh no, I didn’t mean to send that. I shouldn’t have said that. Oh no, I should have thought about what I was going to say.” Oh, my glasses are dirty.

Then number four is investigate why you’re angry, because it could be a multitude of reasons, not just the one trigger. And then number five, exercise, do something to get rid of all that energy and that aggression. Have a fantastic night and I will see you all tomorrow. Bye. Oh and happy birthday, Lizzie.