[365 Days of Extraordinary] Day 355 Transcript: Do you need Confidence Or Courage To Make A Decision?

Hey, gang. Tuesday night, woo-hoo. Countdown is getting closer. Yay. No, I’m kind of … Oh, anyway, we’ll talk about that next week. Tonight I wanted to talk about, or today, whatever. I wanted to talk about whether you need confidence or courage in order to make a decision, and the answer may surprise you. I don’t think you actually need either of them. Making decisions is one of those teeny tiny little steps, can be a teeny tiny thing, they can also be massive, steps that actually helps you build confidence and courage. Okay?

It’s like a chicken or egg thing. Do you need the confidence and courage to make a decision? Or will the making decisions help you become more confident and courageous? I believe the latter is true. So, part of our problem when we make decisions, is we just … You know what? We overthink it, we overthink things. We literally can spend minutes, hours, days, sometimes people take years going round and round and round in their heads, making decisions, best case scenarios, worst case scenarios.

Then they ask 500 of their closest friends what they think about the decision. When they should just make a decision. Now, I’m going to confess here, I have gone through phases of my life where I have been crap at making decisions. I’ve also gone through phases of my life where I go, I’m just a Gemini. Lame ass excuse for not being able to make a decision. Sometimes I do the, Oh, my left brain can’t talk to my right brain thing. And yes, they can all be funny, ha ha, but the reality is I’ve gotten stuck sometimes in those moments of, I just can’t decide, I just can’t decide, because I’m overthinking or I’m looking for external validation or external reasons or external approval for what I want to decide. Now, the reality is if you’re thinking about two things, right? You have, what do we say? You have a choice. Okay. 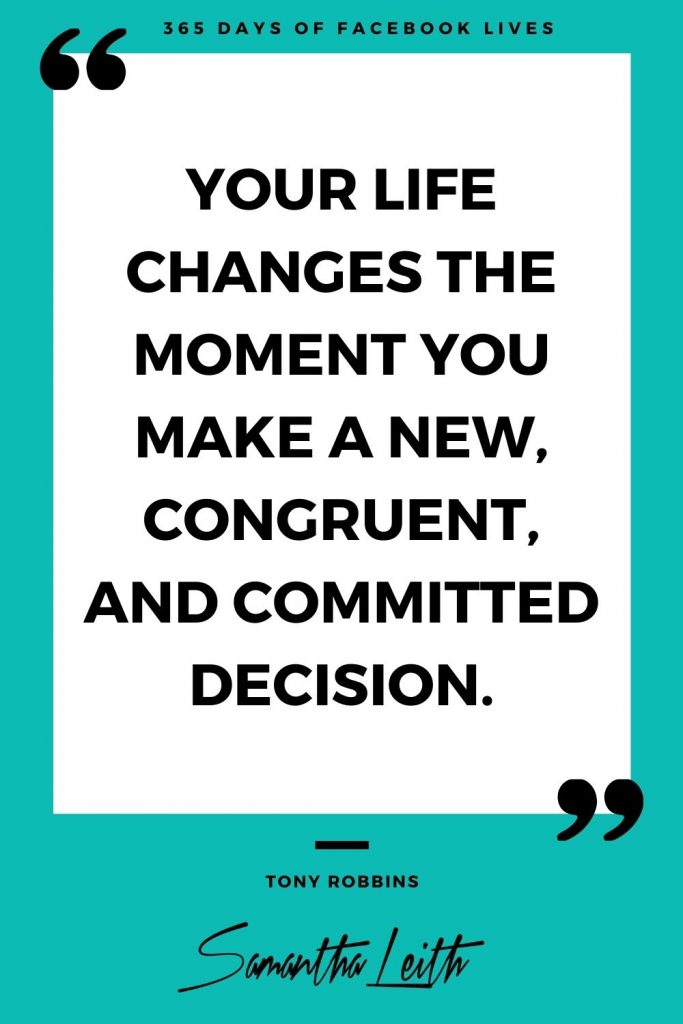 If there’s three things you’re contemplating, you still have a choice. Okay. One choice to make, you have three options. That annoys me when people say you’ve got three choices to make. No, you’ve got one choice, you’ve just got different options, but that’s a grammatical thing and I’m not going to get on that high horse tonight. So, when you’re making one of those choices or decisions, so often you know the answer, you do. It might be that there’s one sensible thing and then there’s the one that you know in your heart, you really, really want. And you’ve put it in there as a choice because you really, really want it. But sensible Sam’s over here going, “Do that, do that, do that, do that,” but you know in your heart and in your gut. Okay.

So, what I want to encourage you to do is just make a decision, just make a decision. Someone says to you … And it starts with the little one, someone says … Okay, we’ll go to the, you’re on a plane, someone comes down and goes, “Chicken or beef?” Just pick one. Okay. They’re probably not going to be that different. Just pick one. If you’re at a restaurant, instead of waiting for every single person at the table, which at the moment can only be a maximum of 10, to say what they want, because you’ve gone, “Oh, I’ll order last.” Because you want to hear what everyone else is having, so you can go, yeah, I’m going to make the right decision now. Order first, just pick something, just pick it. Every time you make one of those quick decisions, you build that confidence muscle, you build that courage muscle. And then, the bigger decisions get easier and easier and easier.

The trick when you make those decisions though, is another C word. We’ve made the choice. We’ve had a choice. And then, the second one is you have got to commit. You have to commit, you have to commit, you have to commit. I’ll give you an example. I just need my glasses for this. Entertain yourselves while I’m getting my glasses. There you go. So, my grandmother was a funny old lady, funny ha ha sometimes, and funny, not so funny sometimes. And we would go out for dinner and you always knew that if you were sitting next to Nana Phil, that you would have to order something, not that you really wanted, you’d order something that you thought she would like, because she’d hum and ha, and hum and ha, and take ages to decide what she wanted to eat for dinner. Then her food would come and she’d have her glasses on and she’d put her glasses down like this, and she’d get her fork, and she’d go like this with the food.

And then, she’d go like that and she’d go, and she’d say, “I didn’t order this.” And then, she’d look at your food, she’d be like, “I ordered that.” And then, you’d have to swap foods. Every single time. Because she couldn’t decide what she wanted and then yours looked better. Every single time. Don’t be Nana Phil, make a decision and stick to it. And the more you make these decisions, the more you just stand in the choice bit, you’re just doing it, the easier it will be. When you wake up tomorrow morning, just look at your wardrobe and decide because we know that our brains and our hearts, by the time we get to the end of the day, every day at the moment, we have absolute decision fatigue. It’s scientifically proven, we get to six o’clock and it’s like, “Oh my God, I don’t know what I want to have for dinner. Someone else choose.”

Which is why so many things like Hello Fresh, menu … What’s the other food delivery? I can’t remember, Marley Spoon, or any of those food things that just arrive and you don’t have to think about it, are doing so well, because people are exhausted. People can’t make up their minds about the simplest of things. They really can’t. There’s a reason why really successful people have … And I’ve talked about this before, when I’ve talked about decision fatigue in particular, they have the same breakfast every day, they have the same outfit they wear Monday to Friday. They have the same dinners, the same trainers, the same routines, because then their mind is free to make the decisions that are actually important. Okay.

But what you and I, Joe and Jill [inaudible 00:06:31] do a lot of the time is we’re using all that capacity that we have to make decisions to just go round and round the mulberry bush on the minutiae of life. Will I have a sugar in my coffee or won’t I have a sugar in my coffee? It’s a really easy decision. Save your energy and save the thinking. I’m not going to say overthinking, try not to overthink, but save the thinking for the big decisions.

So, something tomorrow, no matter how small it is, take no time. You’ve got the options. Just go with the first C word, choice, like that. Then the second C word, commit, like that. These Lives are a great example of that. I woke up and went, “I’m going to do 365 days of Facebook Lives, because I needed to do something to get me out of my funk and my fear of video. So, I made the choice, made the decision to do it. Then what did I do? I committed, 365 days, and God knows how many it’ll be by the time we finish, because we stuffed up the numbering. Doesn’t really matter.

But I still fart-ass around some mornings deciding what I’m going to wear. It’s human nature. Okay. But I want you to just build that muscle, that decision making muscle, and you only do that by not overthinking it, by not looking for external validation or approval on your decisions, and actually just making the choice and committing to it. Okay. You know in your heart of heart what decision you want to make. We always do. We pretend we don’t, but we always, always do.

Have a great night. Don’t forget, it’s www.samanthaleith.com/365days and it is the number 365 and get on the list for the final party. Woo. See, I mean, I made another decision, I’m going to have a party. Yay. Bye.