Q and A Sunday and I’m not doing a Q and A, sorry. Today’s too important for me to do a Q and A, and I have actually got questions, so I might move them to one of the last couple of lives. I do have to do a bonus one because we’ve got the numbers mixed up, but that’s beside the point.

Tonight, I want to talk about death, fun topic, go Sam. Why? Because cheers mum, today is the third anniversary of my mother’s passing. I’ll give you a little bit of context on that. So nine years ago now, within a six month period, my brother passed away, then my mother had a massive stroke and had to come live with Elodie and I, and then my father passed away. So my whole world turned upside down about nine years ago.

Then three years ago, after living with us all that time, mum passed away. She’d had so many health issues during that time, multiple strokes, heart attacks, you name it, it had happened, but the end came pretty quickly and it was unexpected. So why do I want to talk about death, because death is an awful thing and it is a beautiful thing. I did not expect to lose my dad at 38 and lose my mom at 44, how old? 43, whoops, can’t count. 46 tomorrow, yay. Yay me. But when it does happen, there’s this … and we’ve all heard the different stages of grief, so I’m not going to go through those because I think the stages of grief are a bit like a journey to entrepreneurship. People think there’s this loop or there’s these few things that you go through and it’s not, there’s a gazillion things and you can be angry, one day, sad the next day. Happy, the next day, you’re laughing about the fact that they died five minutes later, and then you burst into tears. We all cope with all of those things differently. 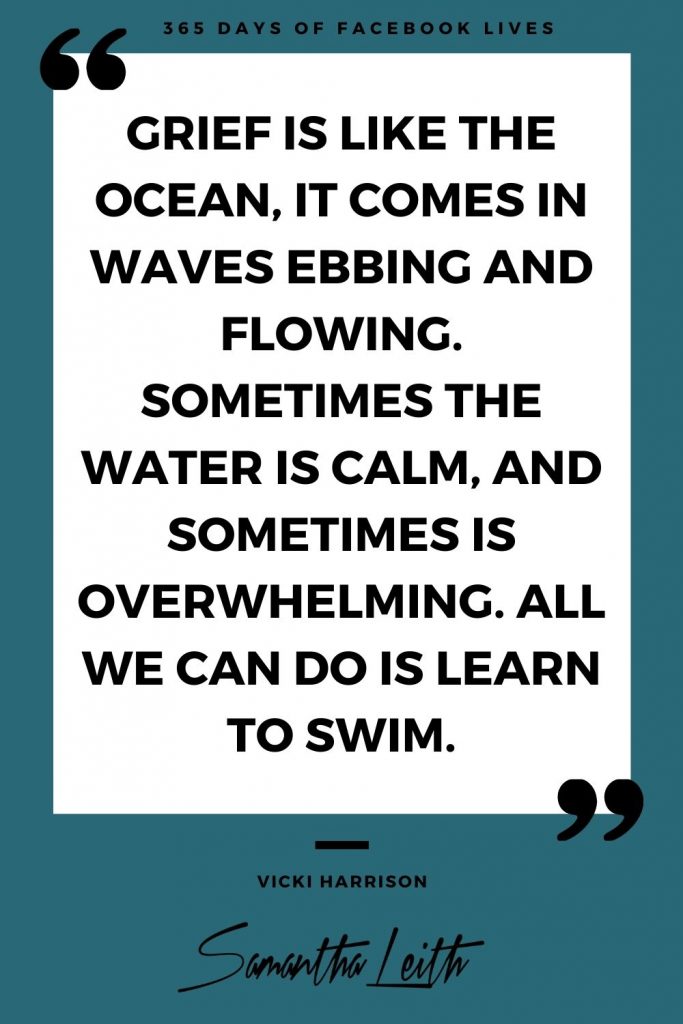 So every year on her death, on the anniversary of her death, I do something to commemorate her life And it means so much to me. So I went to the fish markets today and had oysters and some lobster and champagne, which is what she would have loved and then tonight Peking duck, because she would have loved that and a little more champagne. I sound like a lush but it’s only my second glass, because that’s what’s important.

Now, there are other people around that think I’m a nut bag for doing that, but again, like how you get up in the morning, your morning routines, all of those things are totally up to you. So how you want to celebrate or grieve someone’s life is completely up to you. I love you too, darling and no one has any right to tell you how you should or shouldn’t be doing it. They really, really, really don’t.

The party we had for mom’s funeral. Oh my gosh, it was like an 11 hour wake. She would have loved it. In fact, she just would have been really grumpy that she wasn’t there eating the croquembouche, croquembouche, I can never say that word. 1000% she would have. As you heard me say, it’s my birthday tomorrow and I was a bit pissed off when she died. I was like, “Great.” Then I was like, no, she knows A, I’m never going to forget and it means I’m always going to have a glass of champagne around about that time, so it works well.

But the important thing about death is it makes me even on those days every year of Paulie’s anniversary and my dad’s anniversary and mom’s anniversary, I think about things. Cheers Jill. I think about what I’m doing with my life, why I’m doing things with my life. Am I making the most stupid excuses to not do things because I might not be here another … the next day is never guaranteed for any of us, us young ones, we think, “Man, I got years to get it all done.” Sometimes you don’t, sometimes you truly don’t.

There’s a great book and the name has just … The name’s fallen out of my head. Was written by a nurse and it’s all these stories about people as they were dying and their regrets and their wishes and things like that. Oh God, if someone knows what it’s called, please put it in the comments because I’ve totally forgotten, but we don’t get to a death bed and go, “Yeah.” And I know we’ve all heard the story, I should have gone to work more. We just don’t. We just don’t. Life is to be celebrated with friends, family, loved ones. Life has to be spent doing things you want to do.

If there’s anything my parents taught me, is that they lived life on their terms. 100%. They’d built a yacht and then I accidentally came along. Yeah, I’m one of those kids. So we spent five years cruising on a yacht because they weren’t going to stop their dreams and what they wanted to do with their life just because I needed to go to school. I did correspondence, don’t know if you can tell, but didn’t really do me any harm.

So ironically, this year, when everyone was getting really panicky about their primary school aged kids not going to school every day, I’m like, “Done that for years, I’m fine.” They did things on their terms. When mom wanted to start a new business, she did it. When dad wanted to start a new business, he did it. If they wanted to get dressed up, they got … the fancy dress parties, all sorts of things they did it. They both got to the end of their lives not having missed out on stuff and they taught me that and I’m forever, forever, forever grateful.

So if it’s one message I can give you guys tonight is, what is that thing, what is that one thing that maybe tomorrow you could take a chance on, or you could welcome someone into your house that you wouldn’t normally welcome into your house because Sam said that’s what her parents would have done because that’s what they did. Everyone was welcome. Everyone was given a chance. Everyone was equal and everyone had the opportunity to have a good life with them. Everybody. I’m so grateful.

So, I’m not scared of death. I don’t want to die, not for a long time anyway, but it doesn’t scare me so much. What does scare me is dying while you’re alive, is not doing the things that you’re meant to do while you’re alive, is not taking those chances, is not spending time with people that you care about. Not wearing the crazy outfit, even if people are going to laugh at you and tell you you look like a nincompoop, wear the outfit. If you’re 60 and you want to wear ripped jeans, wear the ripped jeans. Don’t listen to people, do what you want to do.

So cheers, mum, cheers dad and happy Sunday guys. Sorry, I’m trying not to cry, but I really, really, really want to cry now. I’ll see you all tomorrow for my birthday. Bye.