[365 Days of Extraordinary] Day 39 Transcript: Changing Your Life In 12 Months

… Bit late tonight, sorry about that. It’s been one of those days. I saw an Instagram post today and it just triggered some thoughts in me and I thought, “Oh, I’m going to talk about that tonight.” It was about what you need to do to change your life in 12 months. I started thinking about that and then I went to that quote that I can’t remember who said it. Oh, bugger. It might’ve been Steve Jobs, maybe Bill Gates. I know I’ve heard Tony Robbins say, I’ve heard lots of people actually say it, so I don’t know who said it originally. But it’s, “Most people overestimate what they can achieve in one year and underestimate what they can achieve in 10 years.”

Now, I know this to be true because I have an habitual habit… of setting myself unreal expectations for 12 months. Done it all my life. I’m getting better at it though. I really am getting a lot better at it. So, I kind of went, “Oh, what do you mean you can change your life in 12 months?” when I saw this Instagram post. 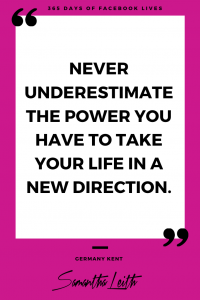 They had little pictures of things and they said, “Remove negative people,” which I completely agree with. You’ve heard me say about this before. Because removing any toxicity from your life, just like removing any toxicity from your gut or any toxic stuff in your household or friendships, relationships, anything like that, getting rid of toxic shit helps so much. Sometimes those toxic people are really close to you and you can’t totally throw them to the curb. That’s okay. Just set up better boundaries and remove them from being a constant impact to your life.

The next one they had was, “Commit 500% to your goal.” Well, you can’t actually commit 500% to anything because you can only commit 100%. But I agree completely to committing 100% to your goal. I do a lot of work with people on goal setting and goal achievement, I should say. Because setting the goal’s one thing, achieving the goal is a completely different story. In my life, I know if I’ve committed 100% to a goal, that is true for me up here as well as in here, I make that shit happen. If I’m not 100% committed… or if I’m doing it for someone else, it ain’t ever going to happen. So, I totally agree. Commit 100% to a goal, not 500%.

Next one was, “Stay humble.” To me, I think that has a double edge to it. Stay humble? It’s stay grateful. Every day in my journal, for example, I write, “I am happy, grateful, and fulfilled.” I think that’s that gratitude thing. I write out five things I’m grateful for. That gratitude piece is really, really important if you want to change your life. In an instant or in 12 months or 10 years, really important. And we should get our kids to do it, too. You know? “What are you grateful for today? What did you learn today?” I learned today the [Elladee’s 00:03:04] just did like a TEDx talk at school, about failure. Wrote it, because something didn’t work for her. She’s 13 and doing a talk on failure. That is awesome.

Next thing was, “Learn from mistakes.” Insert last topic. Yeah, learn from your mistakes. I’ve talked about that before. Celebrate failure because it means success is just around the corner. Learn from what you do wrong, constantly. Tonight I made a little error when I was making a beetroot and chocolate cake because I was kind of speeding through the recipe. I missed the bit where it said, “Use 200 grams of the dark chocolate, not all 300 grams of it. Save it for something else.” So then I was weighing melted dark chocolate, which isn’t actually very easy, I’ve got to say. But it’s a great beetroot and chocolate cake, so I think it’ll all be okay. But I’ve learned from that mistake. Yes, I need to follow the recipe all the way through before I actually start cooking it. Because you make dumb-ass mistakes like that. But as I said to Elladee, “Unless you actually burn down the kitchen or cut off a finger, there are no mistakes in the… ” Or poison someone, I should add that. Three things, burn the house down, injure yourself or poison somebody, only problems in the kitchen.

And the last one was, “Reinvent yourself.” I think that’s fantastic. I think we should all have a reinvention. Look at Lady Gaga or Madonna. Look at the little old lady down the road who used to dye her hair purple every couple of weeks, reinventing herself. Reinventing yourself is awesome and it’s actually just for you. I think people think reinvention is all about impressing other people. I disagree. I think if you’re doing it that way, it’s not reinvention. It’s an act. A true reinvention is when you’ve gotten to a different point in your life or how you’re feeling or what you’re up to, where that change comes internally. And then it’s expressed outwardly. If you’re just changing how you look or something, a lot of the times it’s not a a true reinvention of yourself.

So, I really liked that. I saw that on Insta and I was like, “I like those points, so I’m going to talk about those points.” One, two, three, four, five, six points. Yeah, awesome. So yeah, can you change your life completely in 12 months? I say hell to the yes. I’m doing 365 days of livestreams to prove it. I promise the world and I promise myself, 15th of June, next year on my 46th birthday, my life will be a lot different. Nothing wrong with my life now, but it will be different. Partly because of this action and other things I’m putting into place in my life.

So yeah, hell to the yes, change your life in 12 months. I encourage you to do it. I challenge you to do it. And I’d love to hear about how you’re doing it. Let me know that stuff. If not on here, on the live stream, shoot me a message. Email me vip@samanthalieth.com. I’m sure you can work out how to spell that because it’s on my page. Let me know how you’re going with your 365 days of reinvention. Then send me a picture with a new you. Bye.