So this afternoon I was talking to Elodie, the darling Elodie, about what tonight’s Facebook Live should be about because I wasn’t quite feeling what I had on my content calendar, so I need to play around with that a little bit. And while we were in the car coming out of the Kohl’s car park she said to me, “I think you should talk about procrastination.” And I was, “Why?” So that brought us into a conversation about how she feels she procrastinates, and glaringly obvious, I kind of feel some of those same things. So I thought, “Yeah. Why the hell not? Let’s talk about it.” 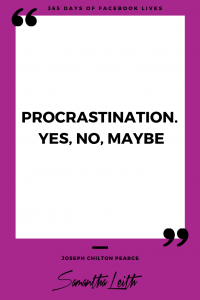 What do you get out of procrastination? Because for every action we take in life there has to be something we’re getting out of it. Even if it’s a really bad action there’s something in that action that we feel is feeding a need in us, or a desire in us, or satiating something. It’s like you’re hungry, you eat something. You’re thirsty, you drink something. Procrastination is kind of a bit like that.

So what do we get out of it? Maybe we get a sense of enjoyment because we actually get to do something else that we would prefer doing. Maybe it’s we get to delay stuff that we’re really shitty about having to do what we don’t want to do, or we don’t actually feel we’re any good at it. Sometimes we procrastinate because we think we’re not actually good at the thing we’re meant to be doing. And the other one is, again procrastination, the flip side of that procrastination is that once you actually get to do the task you have this incredible sense of urgency, or there might be a sense of need or desperation, so that fills that …

So how can we fix procrastination? Now I don’t believe we can actually fix it totally. I truly don’t think there is any person in the world that doesn’t procrastinate on some level in something in their life. What I do think we can do is take baby steps. If it’s a task that we’re genuinely not feeling the vibe for, and when you have those baby steps, actually have a reward that helps feed your needs and take the next baby step. So you do a little thing … so say you’re, I don’t know, gardening. Why I say gardening, I’ve got no idea because I’m so not a gardener, but say I’ve got to do poop patrol in the garden, and mow the lawn, and stuff like that it’s my idea of hell, and I think at last take I probably procrastinated for about a month doing the lawns, but I’m determined to do it this weekend. But I’m going to reward myself. My favorite café has just started a new scrambled eggs with truffle thing, so I’m going to mow the lawn, then I’m going to go and have breakfast. So baby step, like bad thing, good thing, will stop the procrastination.

Another thing we can do is actually form habits around the things we’re procrastinating about. And I’m going to actually do a whole big thing on habit formation because it’s really important to me, and I think it deserves so much attention. But there’s lots of books on habit formation, The Power of Habit, Gretchen’s habit book … oh my God, there’s so many of it and I think it’s really important.

Another thing you can do, which I actually do everyday, is do a task list. And there’s various numbers that you can do. I think five is like the maximum. And make sure you do those five before you get to stop and think about procrastinating or doing something else. So just chunk it down. You’ve got those five baby steps, get that done, and then again, have a reward.

So Tina wants to know … oh look, I’ve got to push a button to read more. Oh. Actually, Tina, procrastination can be a thing on matter of personal priorities because if something is not high on your radar in terms of values, or need, or a personal priority it’s going to go down the list, and your mind is going to get fuzzy, and something else is going to get taken over. So what you can do, if it’s a task you’re like, “Man. It just so doesn’t fit into my needs at the moment.” Let me think of something random. You’re procrastinating on your bank statement. It doesn’t get more exciting then a bank statement. And you’re personal priority at the moment is not sitting in front of zero counting numbers. It’s just not the thing you want to do.

How can you turn that around and make it feel like it’s something more inviting, something you really, really want to do. Well one way to do it is going, “Well, hang on. One of my priorities is keeping my money precious, and using my money for things that are of value to me, and are going to help me.” And one of those things is not to spend money on a fine for not lodging your bank statement. So you can turn something like the power of your money and having into getting your ass into gear, and doing something you really hate doing it because you’re going to lose money during it. You know what I mean?

I think you can turn anything into being part of your value sandwich. So there’s a good, a bad, and a middle in all of them and I think you truly can turn anything you’re procrastinating on into something that is aligned more to you. Me doing a live … Elodie and I have this conversation … oh, 8:51 … we probably had this conversation about 5:51. Since then I’ve unstacked the dishwasher, I made dinner, watched the last episode of Santa Clarita Diet with Elodie … ooh, never again, loved that show … typed a couple lists, did the blog post, did a few things. I actually don’t know … you know why I was procrastinating on it? I’m going to really admit that. I was procrastinating on it because I’ve got this big pimple here, so my confidence was going down a bit. I know, a pimple. Really? And then I had to go and put lippy on, I was a bit cold, and I was like, “No. Stop procrastinating, Sam.”

Do you know why? Because my value is that I set my self a challenge, and I’m going to do it, come Hell or high water, I’m going to do 365 days of these things. So I get to the 15th of June next year and go tick. So no matter what happens, I am going to do it. I’m going to change the times of the day a bit, and I will get over the whole pimple thing. But I’d love … I’m going to keep them pretty short. This I’ve gone on a bit. Have I gone too long tonight? I don’t know. Oh my God. Who knows? I might get better at it and do it for longer. And some of them, they’re going to be a mix of business advice, personal advice, random stuff, cooking, singing, whatever takes my fancy as long as I also stick to my list of what I want to get done over that year. And that is important to me to get that list completed, so maybe sometimes I’ll do twos. Twos? That’s a bit rude, isn’t it? Not number two, do two.

So let me know if you want to hear any information on anything, and I’ll chat to you all soon. Have a good night.