[365 Days of Extraordinary] Day 40 Transcript: You Don’t Have To Like Everybody

Hi. Now, I’m not driving and I said I’d never do a live in the car, but I’m actually half an hour early to pick up my daughter, so I’m on the side of the road, in a side street, engine’s off. I think I’m pretty safe. 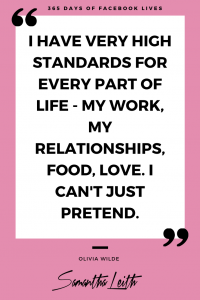 Doesn’t mean we can be narky to each other. Doesn’t mean we can’t … Well, we don’t work together, so that’s irrelevant. But in these situations, I’m not giving you permission to be a bitch or a bastard, but I’m giving you permission, or I’ve given myself permission, I guess, to let go of the belief that I’ve got to like everybody and I’ve got to get on with everybody because it’s just not possible.

It’s interesting knowing over the last few years, I’ve had some friends that have said to me that there are other people in kind of wider circles et cetera that they don’t particularly like, and it didn’t bother me. I was like, “Oh, isn’t that awesome they can say that?” Because I just thought I wasn’t allowed to do that. I truly didn’t think it was okay.

You don’t. Get over it. Be civil, but no, life is not a bed of roses in every relationship. You do not have to get on with everybody and you sure as shit shouldn’t pretend that you really like someone, that’s just not on. Okay? So have a great weekend and, well, I’ll see you over the weekend. But who can you let go of? How can you go … It’s quite freeing when you think, “I actually don’t have to make that effort anymore.” So think about it and free yourself. Fly like a bird. Bye.