Good evening. Got a bit of a face on tonight. I did some filming today. A little side project was … Actually, no that’s irrelevant. Start again. If only we were doing a bloopers reel on this. I had to do a little bit of filming this afternoon, which was really exciting and you’ll see the results of it soon. Hence, the full face. I should do this more often because I do feel fabulous when I have a full face on and hair done and stuff like that. All right, and it’s not about what other people think. It’s about how I feel and I feel fabulous. I’m going to take myself out. Well actually, that’s bull, I’m not taking myself out to dinner. I have a previous engagement with the fabulous Angela [Raspice 00:00:54], so that’s what I’m doing later tonight. I’ll put a frock back on and go out. What I wanted to share with you tonight was one of my very, very, very favorite things in the whole entire world is a thing called the Optimist Creed. Now, it was actually in the secret. My secret is I’ve never seen the secret. Shh, never. I read a little bit of it, but I’ve actually never seen it. I’ve followed lots of the speakers that are in it. I don’t know why I haven’t seen it, but this was shared in it apparently.

It was written by a guy called Christian D. Larson. I’m going to read it to you and share a little bit about what it means to me because I think it’s just so freaking important. Good evening. Here we go. I’m reading it on the screen, so I’ll go like that, so I’m this, you can see me. Promise yourself, be so strong that nothing can disturb your peace of mind. Talk health, happiness, and prosperity to every person you meet. Make all your friends feel there is something special in them. Look at the sunny side of everything. Think only of the best work, only for the best, and expect only the best. Be as enthusiastic about the success of others as you are about your own. Forget the mistakes of the past, and press onto the greater achievements of the future. Give everyone a smile. Spend so much time improving yourself that you have no time left to criticize others. Be too big for worry and too noble for anger. Isn’t that beautiful? There’s so many important words within the Optimist Creed. 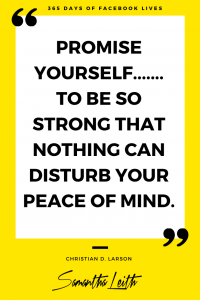 I think it is so important. I don’t know if you’ll be able to see it actually. What a shame. I think it is so important that I have it written on a mirror in my house, so all the way up and down the mirror. I have it written, so I can see it every single day. You know, give everyone a smile. It’s about continual growth. It’s about, yeah, okay, always look on the bright side of life, but it’s about having that internal strength so that a hiccup happens and it’s just a fricking hiccup. It’s not going to completely derail you. It’s about talking prosperity and happiness and positivity to everyone in your life, which I reckon 95% of the time I do. That is so important. It’s about everybody in your life. My best friends, or the people that I’m not that close to, I’m always trying to show them or share with them, something that’s special in them that they might not actually know.

I’m the first person to … I did an Instagram post the other day thanking the customer service at Harris Farm. You know, because I got a great experience. That’s so important. Always, always make people feel like there’s something special on them. Because there is, if you’re on this planet, there’s something fricking special in you. Otherwise, what’s the point? Be So enthusiastic about other people’s success, so many of us are scared, so many people I should say. Not so many of us because I’m not one of them are scared to be excited and happy for other people. It’s just, it’s wrong. There is so much in the world. There are, okay, they only give one best actor and best actress award every year at the Oscars. Maybe you can’t encourage everyone to go for that. Pretty much everything else on the planet, it doesn’t matter how many people do it, they can be successful. Everyone can carve their own little niche. I promise you, but you’re not going to get it if you’re not clapping the others on. You’re never ever going to be successful, if you are not so excited about other people getting what they want and achieving something, getting to that finish line, running over the finish line of a marathon, why on earth would I make that analogy when I can’t run?

My tits are are too big and my phone fell down. Crazy analogy for me to use. Be too big for worry and too noble for anger. We’ve talked about that before. You’ve got to let anger go. I’ve talked before about being too much for worry wart or awfulizing situations, forgetting about the past and moving on. You’ve heard me talk about using those failures and as a springboard to future success. This is a big one and I have to confess, I occasionally f this one up. I can sometimes get into that world, especially in social media, and news, and media outlets, and magazines, and all that kind of thing. Oh my God, what was she wearing? What was that? What were they thinking? I can occasionally have those conversations with friends, but I don’t do it every time. I’m not a gossip and it’s that line, spend so much time improving yourself that you have no time left to criticize others. Because criticizing other people, chances are they’re not going to know you did it, but the energy will really bring you down. Really, really, really bring you down. If you’re going to bitch about somebody like that and you’re saying it to somebody, they’re going to think you’re going to bitch about them and gossip about them and bring them down. That’s not a good kind of status in any relationship, so work on that one.

I’ll confess, yep, sometimes I f that up, but I am really conscious of it and I try not to go, “Oh, did you hear the one about …” Anyway, that’s a digression. Have a Google, it’s called the Optimist Creed print it out. I’m so glad Johnny, and when I do hear people have those gossipy kind of sessions, I actually feel quite like, I get a bit kind of [inaudible 00:07:05]. Sometimes if I’m in that group, I’ll listen and I’m like, “Oh well I can’t tell them to all shut up.” Maybe that’s a strength muscle in myself I need to build up in order to do that. Because I would love to get to a place where I can go no stop, stop. Rather than not just myself not doing it, but telling other people they need to stop. I’m going to challenge myself to work on that one.

Google it, the Optimist Creed. Print it out, have it as your screensaver, have it as your wallpaper on your mobile phone. Read it every single day. Talk health, happiness and prosperity to every person you meet. That is your challenge for the next 24 hours. Yeah, they do. Johnny, they get in there like [inaudible 00:07:51]. Oh, it’s so insidious, so insidious. We have to make an effort to stop it worldwide. I think it’s … When you watch a lot of the magazine industry, especially failing, and now they’ve removed a little likes from Instagram, I’m hoping a lot of that judgment and stuff will cease. That would be really difficult Johnny as a nurse. Yeah. All health, happiness and prosperity. Oh God. There’s gotta be something positive. Oh yes, everybody totally agree. Have a great night. I’m going to go get [frucked 00:08:28] up and I will see you all later.