[365 Days of Extraordinary] Day 45 Transcript: Are You Willing To Do What’s Hard?

Good evening folks. My question for you tonight is, are you willing to do what’s hard? Okay? Now, as an affirmation every day I say, “I’m willing to do what others won’t in order to live a life that others don’t.” Do I always live that? Hell to the no. Sometimes I can be a lazy ass, so-and-so. Sometimes I take the easy road, sometimes there actually just is a more efficient way of doing things so it’s less hard.

I think the hard word is sometimes also a little bit hard for people to tackle with. Hard, hard, hard. In fact, my business used to be called Smart, Not Hard because I wanted to … My whole thing was about helping people work smart, not hard, as the saying goes. But sometimes hard work is actually a good thing.

And then the world flipped on its head and we saw the rise of the influencers and four-hour work weeks and do it once and just throw it out into the universe and get paid for it forever. And people hearing all these things, took it upon themselves I think, because if I go back and read all the stuff that I’ve read over the years about passive income, residual income, outsourcing, any of those things, none of those people are actually saying, “Life is just easy, don’t do anything.” 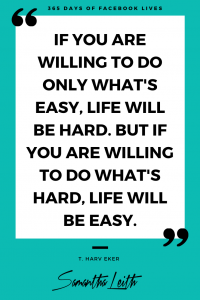 They all actually worked really, really hard and do work hard to get what they want out of life. It’s about the way you make those choices. So I think T. Harv Eker was the one that had the famous quote, “If you’re willing to do what’s easy, life will be hard. But if you’re willing to do what’s hard, life will be easy.” And I really agree with this because it’s when we make the hard decisions and tackle the hard tasks, like Brian Tracy says, “Get up in the morning and eat that frog.” Do the hardest thing on your task list before you actually get it and it sets you off for the day.

And on that, it’s just growth. Always making … Not always making the hard choice. No, hell it. Go the hard road at the moment. In order to achieve something, if you’ve got an a target out there, it might be the most audacious goal you could possibly think of or it might just be getting your ass out of bed at five o’clock tomorrow morning to go to the gym. Okay? That could be the hard decision that you need to make tomorrow morning, but whatever it is, that’s going to give you growth. Without a shadow of a doubt, making those hard choices will give you growth.

Making those hard choices and helping you get to goals gives you success. And there’s not actually many people that don’t want to be successful. Success looks different for everybody. So I’m not touting one version of success or another because we all have a completely different idea of what success means to us. And we should only, only, ever be striving for our version of success. Absolutely. Life sucks if all you’re trying to do is fulfill someone else’s idea of success. Terrible.

So what are some of the hard things we’re going to do? Get up earlier, say no. When someone’s going to something really exciting, but you know you’ve got that assignment due tomorrow, you got to say no. You have to say no. You work when others are celebrating. You turn off the TV when you need to do the dishes. You assess every situation and you make the decision that is going to lead you closer to your goals, not further away from your goals.

And life doesn’t work like that. The real world takes hard work and takes time, so getting up at five o’clock tomorrow morning is going to be a tough decision and you’re not going to see the benefit of it for minimum a couple of weeks, but it might be months. And the health benefits of that, you’ll be rewarded for those health benefits, unless you go off the deep end, for years and years and years to come. So is worth it. So be willing to do what’s hard, be willing to do more, be more, achieve more, have more. But all of those things start because you’re faced with a decision and you go, “Netflix and chill or calling three people and ask for the sale?”

Unless you’re a maniac, no one wants to make the sales calls. But that’s what’s going to get you somewhere. So tomorrow when you get up, if you’re going to be like me and get up at five o’clock, send me a message because I’ll be up and I’ll reply back. Yes. Do more early shifts because there are studies, it’s interesting. There are people who are actually more efficient late at night. There were definitely people that can do that. There are very few people in the world that can survive on four or five hours of sleep and maintain any kind of sense of decent life without being completely headed up on caffeine.

But the majority of people, our algorithms, our biochemistry, have us doing our best work and most energetic work and the most brain power early in the morning. Do you know, when I was at school, in high school, I would get up at five, 5:30 in the morning. My mother would listen to this radio station and I’d hear the time of the call of the hour, and I’d get up and she was listening to some talk back dude and she’d make me a coffee and have breakfast and do my homework. In high school, I would get up at five, 5:30 and do my homework because that’s when my brain worked better.

My friends probably thought I was a little bit mad, but I’m still the same. But unless I’m out having a great time and having fun and being social, nine, 9:30, I’m like, “Night, night world. I’ve got to go to bed. I’m tired.” So it’s interesting I’m doing these lives at night because it’s not my most efficient state. So I might switch it and then you might get better content.

So yeah, make the hard decisions. What are you going to do tomorrow that you might not actually want to do, but it’s going to get you closer to what you want to achieve? Because I promise you, when you’re willing to do what’s hard, you will achieve more than the people that take the easy road out. Promise you. And I don’t make many promises. Yeah. Sometimes I do. Okay. Have a great night and I’ll see you tomorrow. And yes, get up early.