Hi. Oh, why did I yawn right at that moment? Hello good evening. It’s cold in Sydney tonight. I wanted to talk about rapport or rapport as some people call it because they don’t know it’s a silent T on the end. Say that with a straight face because I wouldn’t be judgemental about that kind of thing at all. Anyway, what is rapport? Rapport, I’ll give you the dictionary definition of rapport, a close and harmonious relationship in which the people or groups concerned understand each other’s feelings or ideas, and communicate well, there you go. There’s actually a quote I do like from Tony Robbins and he says, “Rapport is the ultimate tool” do have to read this sorry, I’ll start again. “Rapport is the ultimate tool for producing results with other people. No matter what you want in your life, if you can develop rapport with the right people, you’ll be able to fill their needs, and they will be able to fill yours.”

There’s lots of quotes on rapport. Rapport is really, really, really important, whether you are in sales, or going to a school function and you just want to get on with the parents in the kindie class, it’s important in workplaces, it’s important and it can be, it’s funny rapport can be earned. Rapport can be there on screen like this. I can develop a rapport with you guys through the camera like this, or through the phone in this case, you can build rapport in real life when someone’s right next to you, or in front of you. You can build rapport on radio and podcasts. You can build rapport on stages. I bet you some of you have been to a concert, and you watch the person on stage singing and you leave thinking, “I may as well have just listened to the CD.”

There was no feeling there. There was no rapport, funny that. So I just wanted to give you a few little tips, a few 10 tips on how to build rapport and don’t overthink it. Rapport is like I talk about confidence, charisma, all of those things, rapport is a skill that you learn, and you learn it through practice. Practice makes perfect, and all that kind of stuff. So there’s 10 things I want to share with you, and they’re instantaneous. So you don’t need to think, “Oh okay, I’ve got to do this bit now. Now in this conversation I do this bit.” It’s just, it’s part of how you deal with people and what you’re doing. Okay, so it’s not, I’m going to … That’s really annoying me my little Fitbit. I’ve done my 10,000 steps if you care. So the first one is about your body language. 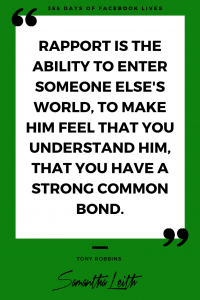 So when you’re talking to somebody, especially this is and funny, this is true in real life, and also if you can’t see the person, because believe it or not, your body language creates a different energy. A lot of radio people actually do the whole radio show standing up they’re like because they’ve got a better energy, they’re talking. In fact, I should probably do my lives like this because you do. You have a different center of gravity, a different energy and that absolutely comes across which helps with rapport. If you’re, oh, now I think I should stand while I do this. If you’re talking with somebody in real life, how does it feel when they go like this, or if they’re like or looking around, not making eye contact? If they’re not making eye contact, rapport is out the window. The other thing in body language is mirroring.

So if you’re sitting with someone and they, and I don’t mean someone goes like that and then you go like that, not that kind of mirroring, that would make you look like a doofus. I’m talking about like if they cross their legs, maybe cross you’re legs. If they’re sitting back in their chair, you can probably do that. Don’t copy them, that’s not right, but it’s kind of going with the flow of how they are using their body language. So you’re doing a body tango, oh that sounds like fun while you’re with the person. That’s number one. Number two is language. So if you instantly think like if you’re with somebody who swears like a trooper, you can probably drop the odd word, but if you’re in a situation where the person’s talking in quite a proper tone, the last thing you want to do is drop an F bomb, no, completely inappropriate.

They’re talking fast. You might speed up a little bit. If that’s getting hard, you might try and slow them down a little bit, and they might mirror you if they’re working on building rapport. The other thing is to listen to the auditory cues. So we all know that people have different kind of styles, so there’s visual, auditory, kinesthetic, [inaudible 00:05:13] I can never say it properly olfactory and gustatory. So if people are talking about, “Oh that feels”, or “I can see that”, or “Something stinks about that”, “I can taste the victory.” They’re all the different ways people learn, and people speak in the same tone generally as to how they learn. So you can pick up on what they’re doing, and you can do with that. Find a common ground with the person when you’re speaking with them.

That’s a big one to build report. Don’t be talking on two different tangents. Find something, a commonality. Listen, listen, listen, listen. Remember we’ve all been told a kazillion times two ears, one mouth, use them in that ratio and yes, that did sound a bit patronizing, sorry about that. Be Present. Be completely present with the people. Don’t be, [inaudible 00:06:10] my phone. I’m filming on my phone. I’ll do the old fashioned. Don’t pick up and have a google. Don’t be cleaning your glasses. Be completely present with the person. Be open, so be open to ideas, to conversations, to changes in direction. People can tell if you’re closed to what’s going on, and if you’re thinking about the dishes for example, you’re probably closed to the person you’re having this Rapport Tango with, and it’s not going to work.

Sorry, be yourself. Don’t be fake. Many of us as I’ve spoken before are a bit chameleon-like, and in a rapport building situation, being chameleon actually can be really, really, really useful, can be really, really helpful, but still be yourself. Don’t be fake. Be yourself because fake people they are shitty people, we don’t want them. Be interested, be interested in the other person, what they’re talking about, what they’re … And sometimes when you’re being really interested in what’s going on in the conversation, and you’re bouncing that conversation backwards and forwards, find a genuine compliment. A lot of people say when building rapport, finding a compliment to give someone as a really, really important thing, I only think if it’s situationally perfect.

So if you’re building rapport with someone school trivia night for example, probably sitting next to them, they’ve had a few drinks, you’ve had a few drinks, probably not the right kind of place to compliment them on, I don’t know, something heard on the grapevine about them doing at work, gauge it. If you’re a woman, I think women don’t give enough compliments to other women. I think we all need to work on that. I’m not afraid at all to walk up to a complete stranger on the street and go, “You look beautiful today. Your dress is gorgeous. I like the handbag.” I also tuck in their tags because sometimes people don’t like that, a bit outside, a bit too close to them. So be interested, offer compliments, that kind of thing.

The last one is offer value. So in the Rapport Tango, it’s a give and take kind of situation, and you want to offer something of value to them. So it might be a hint about something they’ve said to you, might be some advice. Don’t tell them what to do. Do not tell people what to do unless they’ve asked you to tell them what to do. Okay? Even coaches, so I work as a coach, and I don’t tell people what to do. It’s not the point. People need to figure out … People take action on their own hearts, okay? You can offer advice and guidance, so offer some value to them for their part in this conversation. You might know someone they want to meet, who knows? It could be great blind date.

So they’re my 10 tips on building rapport, okay? Couple of them are more important, and they would be the body language, be present, the actual tonality and language of the situation, and being yourself. I’d say they’re the biggest ones, and the common ground is really, really important. So have a great night. Tomorrow find, someone and do the Rapport Tango, the Rapport Rumba, that’s what I call it. Do the Rapport Rumba with someone, that’s your Friday challenge. Have a great night.