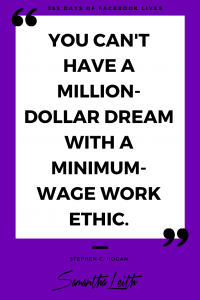 You’re not going to get where you want to get doing that all the time. It’s really important to look at what your priorities are. Oh, light when you backed up a bit [inaudible 00:00:56] . It’s really important to know what your priorities are and what you can actually get done in a timeframe. The list that I set myself for this weekend was unrealistic, I’ll just say that, but I still, the things that I’d got done today, I feel so good, so on purpose, my passion bucket has just been topped up. Like it’s overflowing because I love what I do so much.

My confidence has had a boost because I got shit done, I got the things that I wanted to get done today done and no matter, it’s actually one of the exercises in the confidence challenge, because no matter how small the task, getting stuff done helps build your confidence. Sometimes I think we give ourselves too many things to get done, almost in a kind of self-sabotaging way to keep ourselves in that comfort zone of not feeling great about ourselves because a lack of confidence or feeling a bit, you know, I’m hopeless, I didn’t get stuff done, can actually be comforting.

It’s like it’s warm and squishy and it’s safe because we don’t have to go out and do something extra and that’s a terrible way to live. I’ve said to many ums tonight, so I know tomorrow’s Sunday, so it might not be a work thing, but I want you tonight before you go to bed to write out five things that would dramatically change how you feel about yourself if you’ve got them done tomorrow. Now it could be, you know, separating the whites from the blacks and doing that, could be calling a friend. It could be doing something around the house.

You know, it could be just making sure you actually get the recycling out on time and don’t rush out like a lunatic on Monday morning at 5:00 because you forgot to do it. Just five things and then set yourself some time tomorrow to do it and I promise when I check in tomorrow night, if anyone’s actually at the live time instead of later, you tell me that you feel better because you did those five things. It’s miraculous, and then go into your week, you know I talk about making sure you plan your week at the beginning of the week, go into your week setting yourself things to get done, but not setting that bar too high, because when you set that bar way up there, you’re like, oh, it’s really hard to get it all done.

Get some stuff done tomorrow people, and I’m off to Hugh Jackman now, so have a good night.