[365 Days of Extraordinary] Day 50 Transcript: How To Deal With Negative People

Good evening. Happy Monday. I can’t do the sideways thing, I have to do with this way, so I feel like I’m looking at you properly. I want to talk about negative people today. We all know some negative people. Chances are we’ve all actually been negative at some points in our lives. I know, I’ll admit I have. I’ve found this great quote by Shirley MacLaine, “Dwelling on the negative simply contributes to its power.”

I quite likes that. I did quite like that. So what do I mean by negative people? Well, I’d say a joke about negative Nancy, but that poor old Nancy gets a bad rep. I actually don’t know if I’ve ever met a Nancy, but sorry, Nancy. Negative people are always complaining. They love to dwell on bad news. They find it difficult to show a lot of love if they’re going through a negative phase. They can suck oxygen out of rooms as they walk in. They constantly complain about things and generally stay in victim mode.

Even if they’re presented with really, really good news, they can probably come up with something bad. Okay. They could probably like “Won The lotto. Oh my God. Now people are going to want to borrow money from me.” So it’s instant. They don’t even … I think they didn’t even think about it. It’s just like an … It’s not even glass half full, glass half empty. They can see the little chip in the glass. I’m talking about those kind of people. 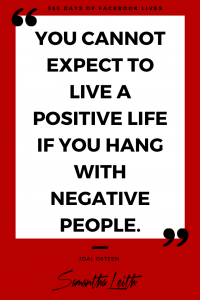 They’re never upbeat or positive. They’ve got really thin skin, and if something happens, it’s always they think it’s about them. A lot of the time they actually have bad reputations because of this. So then they feel even worse and they’ll be more negative because they’re not hanging out with people they want to hang out with, that kind of thing.

It’s not a good state to be in negative Nancy. Again, sorry Nancy. I just wanted to just share a few things I’ve learned over the years about dealing with negative people and how to kind of not flip the switch, ignore … Don’t ignore them. No, that’s bad. Don’t ignore people. The first thing you’ve got to do in dealing with negative people is drop your expectations of them. A negative person, unless they do some massive work and it is absolutely possible, they’re a negative person. So unless they suddenly find their way into a bookcase like that and doing a lot of personal development, they’re probably going to stay negative. So drop, don’t think they’re not going to be.

Set yourself really, really good boundaries would be my number two point. Boundaries, again, I tell you, I’ve been really honest about me having to work on these. I’m not great on it, but I’m getting better. This is what I fall into because I’m so pro-personal development and business development and I do handle my heart, I believe anybody can be, do or have anything they want in life if they just put in the work and the effort and have the right head and heart and business acumen.

So I’ve tended to get in there over the years with negative people and try and fix them or try and help them or try and change them or try and convince them that what they’re doing is the wrong way and they should be really positive and life will just be better if they’re positive. You can’t actually do any of that unless they want to do it. So stop. It’s a waste of effort. You just come out of it feeling bad about yourself because you haven’t managed to impart the light, the wisdom on them and make them smile. So just don’t try.

Keep quiet. When they are talking and they are in a negative thing, sometimes it can be easy to kind of be like poking the stick or they’re saying that’s not a red star. Well, the stamp is fading and you’re trying to argue with them to get it back. Dump all that. Just keep quiet. Nod. “Yes, I hear you.” Negative people want to be heard and acknowledged. Don’t ignore them, so acknowledge what they’re saying. But don’t buy into it. Don’t, as I said, don’t poke the fire, poke the ball, just and trying to then steer the conversation somewhere positive.

That can be changing the subject. It could just be, “Hey,” even. It could just be gently trying to focus on something a little bit more positive in that situation. There’s always a positive, there’s always, always, always a positive and it can be found. On that, why don’t you be an example of positivity? So instead of trying to convince them to be more positive, you just being an example of positivity.

Always be able to see a solution to a problem rather than a problem to every solution. Always have a smile on your face. Always be prepared. When people are really negative, the more they’re actually surrounded by positive people and positive vibes, it’s going to eventually rub off on them. Little by little by little, they’ll start, “Oh, maybe there is a better way. Maybe there is a better way.” And the more that rubs off, then maybe they will pick up a ball, get a coach or make a phone call or read a blog or listen to a podcast and slip, slip … Snap out of those negative habits.

Another one is, have compassion for them. Because when people are constantly negative, they must feel like shit people. You cannot be a negative person all the time and feel great. Surely you’re not having a great life. You feel like their self-esteem, their … It’s just, yeah. So I have a bit of compassion for them because chances are they’re not doing it deliberately. It’s just them and they don’t know how to not do it. So be compassionate about them and don’t judge them for it, but don’t take it on, if you know what I mean. So yeah, I’m sure you know what I mean.

Don’t buy into their drama would be my tip number 10. Negative people have a way of sucking you in and before you know it, the conversation is 10 minutes long and you’re agreeing with them or you’re arguing with them or you’re your … And you get into this drama loop with people about, and you try to fight your way out of it too. Don’t buy into it.

Listen, be compassionate, change the subject, be positive. Be an example of it. Don’t also make the mistake of getting too fairy frost with people. You know what I mean? If they’re being really negative and you’re like, “I know. Sam said I should be positive.” So you go on all in vanilla bean positivity and way over the top, and you’re a sickening sweet kind of fairy frost and leaving a really bad aftertaste in everyone’s mouth. That’s way too far. Just way too far.

Tone it down and remember my tips. Drop your expectations of them. Have great boundaries. Avoid trying to fix, change or convince them. Keep quiet. When in doubt … Quiet. Change the conversation, guide the conversation, change the subject. Don’t take it personally was number six. A big example of positivity, have compassion for them. Don’t be Judge Judy. There’s only one Judge Jury. Concentrate on the positive of your life.

Gratitude, gratitude, gratitude. It fixes everything and helps everything. Sorry, I shouldn’t say fix. It helps everything, and don’t buy into the drama. We’ve all got enough of our own bloody drama. We do not need to be buying into other people’s drama so every [inaudible 00:08:10] away. They are my 10 tips. Yes, I can use my fingers. 10 tips for dealing with negative wretches. Run, run as fast as you can. Have a great Monday night and I’ll see you all tomorrow.