[365 Days of Extraordinary] Day 53 Transcript: Excuses – Why We Make Them And How To Stop

Good evening ladies and gentlemen. How is everyone tonight? Tonight I wanted to talk about excuses. I Samantha Leith do solemnly swear I’m never going to make an excuse again. Now we all know that is bullshit. People make excuses. We all make excuses. We start making excuses and we start hearing excuses around us when we’re really young, like we really, really, really little. So, it’s a habit. I’ve talked about habit lots of times.

Why do we do it? Why do we make excuses? Well, generally excuses are a form of protection. We want to protect ourselves from the perceived shame of failing, so we make up an excuse why we haven’t tried. We want to protect ourselves from blaming our souls because we broke our no sugar thing. But I didn’t put the lolly jar there so it’s not my fault. Sometimes we make excuses because we’re not motivated or committed or we didn’t really want to do the thing in the first place.

New Year’s eve is the perfect example. We make a gazillion resolutions every year. I think the statistics is something like, 8% of people are still working on their New Year’s eve goals and resolutions by about the 10th of January. Like it’s all over. Because we, nine times out of 10 we actually just don’t want to do it. We’ve blurbs to gone [inaudible 00:01:37] and then we don’t want to do it.

That’s one of the big ones I think. Not really wanting to do something. How many times have you agreed to do something and then made up an excuse because you actually didn’t really want to do it. You didn’t want to read the book. You didn’t want to go to coffee. You didn’t want to do that thing that beat up when that project at work. And then it becomes, once you start making excuses, they’re like these teeny tiny little white lies. They creep into your personality and your psyche and you get better and better and better at making excuses and you don’t… I think sometimes you actually don’t even know that you’re making them. Like you get to a point when you do not realize you’re continually making excuses.

You’re on day three of hitting the snooze button and you’re just like, oh, I’m tired. No, you’re not. You’re making excuse for not getting up and doing what you wanted, what you planned, what you needed to be doing. Ultimately making excuses and continuing to make excuses actually stops you from taking responsibility for your life. And it stops you achieving what you want out of life. It stops you going for anything you want in life. It’s about rationalizing our behaviors. And yes, doing nothing is actually a behavior while laying blame on something external, like the weather, a coworker, the interest rates, everything. 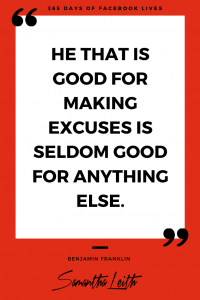 But ultimately, I think fear is the underlying issue for pretty much most excuses. And I’m happy to be challenged on it. So send me a challenge. And I’m not talking about a legitimate, I can’t come to your party because my car broke down. That’s not the kind of excuse I’m talking about. You know the kind of excuses I’m talking about. I can’t come to your party because I’m a bit tired. You make that excuse, chances are, the fear that you’re actually experiencing is the fear of going to the party because you’re feeling a bit introverted at the moment, or you’re fearful of going because you’ve got to buy them a present. We are fearful of going because we really don’t like the person.

What are some of the things we fear? We fear failure. We fear success. That’s the yin and yang one which is just awesome. Thank you universe for making us equally afraid to succeed as we are to fail. Ridiculous I know. We’re fearful of rejection. We’re fearful of change. We’re fearful of making mistakes. We’re fearful of getting in trouble. Oh my God, punishment. They’ll find out. And that goes into the fear of being found out as being not good enough and those kinds of, that’s a mass of fear. That’s like a whole plethora of our Facebook lives.

Imagine if all the great minds in the world over the last centuries had made excuses because they didn’t have power. So, something didn’t get invented, they didn’t even know what power was. Excuses just stop us. They’re like a brick wall. And once the brick wall of excuses has come up, you are frozen in that current state. Those excuses trap you in being that person you are at that moment. You can’t break out of that unless you stop the habit of the excuses. And if you don’t stop the habit of the excuses, those deadly regrets kick in. The regret for the life that you didn’t live, the business you didn’t start, the child you didn’t have, the lunch date you didn’t go on.

And regrets are like jealousy. It’s like one of those poisons that you just take yourself and it seeps into you and destroys your life. So today we’re going to talk about flipping excuses. Why do I want to talk about it? Because I have made more excuses in my life than I care to admit. I truly have, yep. Card-carrying excuse expert, or XX, I like XX. Extraordinary expert of excuses.

Yeah, let’s just go with that. I could do a whole business on Xes, oh, and not those kinds of Xes. What kind of excuses do we make? We make excuses about time, money, resources, kids, partners, tiredness, education or lack there of, your age, your location, your status, making excuses about anything from… And some of them just are stupid, like really some excuses are just stupid.

Question your excuses. If you find you’re making excuses, like it’s day seven and, sometimes I go to day seven and I hadn’t done my lives, and in all of the days, I think I’m up to day 54, 55 something like that. I do have a shade. I’m crossing them off every day. There’s a gazillion moments where I’ve gone, I don’t want to do it today. I can’t be bothered. I’m tired. Oh, I don’t want to talk about that topic today. Oh look, there’s something on TV. Oh, I want to read that book. Oh, I want to have a bath.

And if I look at all of that, underlying that was my fear of doing this and not giving valuable enough content. My fear of not looking great enough while I did it, my fear of, oh, are they going to actually read all the titles in my bookcase? The fear of stepping into this, I guess, a little bit maybe. And it’s all just crap. Look, I’m now this far along in it. And apart from that day I was crooked as a dog and I just couldn’t have gotten out of bed to do it, I don’t think I’ll make an excuse. I truly don’t think I will. I’ve broken that habit. I’m doing this, it’s really fricking enjoyable. And I don’t want to make an excuse because I broke the habit.

I haven’t had sugar in a week, over a week, eight days. I’m one of those people that if someone, if there’s a lolly jar there or a biscuit there, I’m like, I’ll just have one, and then you break that damn. It’s like, ooh, I want the second one. Ooh, yeah, I’ll have the third one. And then you wake up the next day and you go, oh, I’ve got a bit of a hankering for something sweet and it can just be little bits. But I always kept making excuses on that and I think I’ve broken the camel’s back on that one as well, which is great.

When you’re making all these excuses, I ask you to question why you’re making it. Do you really not have time? Really, really? Ask yourself how you can change the situation, which is making, you want to make the excuse, like is there something you can learn in that situation? Go back to the lolly thing, if my excuse is to have a lolly because the lolly jar is open, maybe I should have lunch earlier so I’m not tempted by the lolly jar. What can I learn from what I’m doing?

Address what you’re fearful of because that’s what’s making you make an excuse. You make the excuse to not reach out to three people on LinkedIn that day. It’s simple. Type three messages or you ring three people, you reaching out to people, but you make the excuse not to do it. Why are you making excuse? I’m fearful I’m not going to get the job and they’re not going to like me. Well, what’s the worst that is going to happen if you don’t get the job? The world’s not going to end. It’s not… apply for another job.

When you discover why you’re making the excuse, work out what the fear is that’s causing that excuse to happen, and then you’re onto something. Once you’ve worked that bit out, set some little bit of yellow. It’ll be the little goals because we now are lacking little bit goals that are going to help you build your confidence. Because the more confident you are on any of these areas, the less likely you are to make excuses. And as your confidence builds, you’re less likely to compare yourself to other people.

And then you make less excuses again, because the more we compare ourselves to people, the more excuses we make for not being as perfect as that person is. Oh my God, my videos aren’t as good as the ones I saw. I just shouldn’t bother. I just know I’m not as good as him. My hair’s not done, I can’t do them. If I hadn’t looked at the person, I wouldn’t have worried about my hair. So stop comparing. Learn from those mistakes and the things that stopped you because that’s the next step to how you’re going to get anywhere.

When I’m coaching people, I can be a great accountability coach and I love doing that. But ultimately you’re accountable to you. Regardless of what your beliefs are, when you go to bed, when you hit your head on that pillow, you are 100% accountable to you for everything you are and everything you will be. So there you go. Three steps: acceptance, accountability, action. And that will help you to stop this habit of making excuses and actually get what you want. So there you go. Stop making excuses. Bye, bye. See you tomorrow.