[365 Days of Extraordinary] Day 58 Transcript: The Work In Everyday Life

Hola. So a few years ago, I became a certified passion test facilitator and you’ve heard me talk about that. I think it’s a really, really powerful tool and I go back to it quite often, and I use it with all my clients. Love it, love it, love, love, love it. Thank you to the passion test.

One of the things we learnt in that facilitation process is a thing called The Work by Byron Katie. Now if you haven’t heard about who Byron Katie is, you can go to thework.com and you can read all about her, but I’ll give you a bit of a gist and then I’ll talk about why I think it’s such a great tool.

So Byron Katie suffered from … hola, incredible depression. It’s very, very deep story about her life, getting to where she got to the point where she created The Work. Bottom line is, at one point she was lying in a halfway house where she had sent herself because of all these issues.

A cockroach crawled over her and I might … This is artistic liberation here. I may not have the story exactly correct, but you get the general gist. So the cockroach crawled across her and all of a sudden she kind of realized that prior to the cockroach walking across her, her life was such and then it was something had changed but it was all about her thoughts. So it was, and this whole work process started about what we’re actually thinking and is it real? Is it not real? How do we know it is? And pretty much once she came up with this, her depression kind of lifted and she was happy and she went home and she had this resurrected a relationship with her family and her life changed dramatically and she created this process called The Work.

Now I use The Work not religiously and that I sit down with a piece of paper and do the exercises, but I do it in terms of what we call a turnaround, all the time. I did it twice a day in situations. One person when I, one moment where I thought someone was really angry with me, they haven’t said anything to say they were really angry with me, “Samantha I’m angry with you”. It was a tone, it was the way they spoke to me that had me feel they were angry with me. So I’d go through The Work in seconds in my brain and I’ll step you through it now about how do I know it’s true. Is it true? Who am I the person with that while I’m thinking that thought? And then I flip it and go, “I’ve got no idea if they’re angry with me. That’s my shit cause I thought that so over it. Move on.” 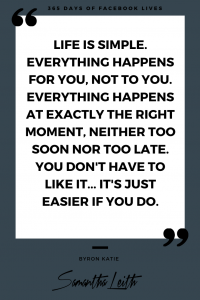 So I wanted to step through with you how to do that and you can go to the work.com as I said and you can download this worksheet. It’s called a Judge Your Neighbor worksheet. And you can go through situations in your past. You can go through situations as they happen. And I think it’s actually a good exercise to sit down and go through couple of really poignant things in your life. It can be really powerful. I remember the first time we did it in our facilitation, I was like bawling. I was like, “Oh God.” Cause I was like, “Oh my God, I’ve always thought this was something.” And by the time I’d done this I was like, “Oh no, I actually just thought it was something. I have no idea. That is actually fact. So I need to, I will let go of that thought and flip it around to maybe having a different meaning.”

Yeah, it’s just, we think these things and once you start realizing that all, and I’m not talking about depression here, so clinical depression is a completely different kettle of fish. And there’s, I believe if you have a clinical depression, psychiatry and therapy, the way to go, possibly medication for many, many people and there’s no stigma with that at all from anybody or there shouldn’t be and if there is, send them to me and I’ll get grumpy with them. Why am I doing a Wiggles thing when saying that. Anyway, but if it’s just a moment where you’re reacting to something, it’s all in here. It’s all in our thought process. So if you get a tool like The Work where you ask yourself these series of questions and you can flip it in seconds and come out of that situation going, “oh, okay, yeah, no, I don’t know that.

And you can do it in the positive as well. “How do I know they really have the hots for me? Well, I don’t really know they have the hots for me. Where would I be if they did? I’d be having fun. So it’s not always negative. You can do it in a positive when you kind of … because we make believe in our minds, Our minds are like the greatest play playpen in the world. We can cop stories. Everybody by nature is creative. So there’s all the stuff going on and honestly, so much of it’s just crap. It’s not true. We’ve concocted these stories and little mini lies about our lives and about what we thought of a situation or what we thought someone felt of us or you know, “oh my God, that waiter looked at me the wrong way.” And by the end of the day, we’ve sat with the thought that the waiter looked at us the wrong way so many times that by the time we go home we go, “oh my God, I must’ve looked really ugly today cause the waiter looked at me the wrong way. So, Oh, I’ve got to get to the gym, I’ve got to do something. Cause I’m obviously really ugly.” The waiter may have just been having a bad day. Okay. But our minds just go.

So let’s go back to my situation today because it’s all about me. What’s not? But I’m trying to give you guys tools that I find really, really, really, really useful. So do I know that it’s true? No, I don’t know it’s true. So how did I react? Or what when it happened or what did I believe in that thought? So in that thought, I thought this person was angry with me, which then made me feel like a bad person or that I’d done something wrong. I’d let them down, I disappointed them. I’d been stupid. I hadn’t done something I was meant to do and I got cold.

I have quite physical reactions when I’m feeling things. So in that instance it’s like life just goes bang. “Oh my God, I’m terrible.” And then like “oh”, and then in the seconds I go, “oh, hang on, they actually haven’t said, Samantha, I’m angry with you. I have thought that in my mind.” So who would I be in that second if I wasn’t thinking that? Well if I wasn’t thinking that in that moment I’d be the same Sam that had an awesome day and is pretty confident that she’d done everything that was expected of her today for her clients, her family and her friends and turned up where and when I needed to be and got stuff done. So I’d be feeling pretty good myself. Launch the confidence challenge, stuff’s going well. If I didn’t think this thought that, “oh my God, they’re angry with me so therefore I’m a terrible person cause I let them down.”

So the first question you’ve got to ask yourself in any of these situations is, is it true? If you go, “yeah, it is true. They’re angry with me cause I said I’m angry with you.” Do you absolutely know that it’s true? Yes or no? Again, if they say point blank something, well you kind of got to go. That’s their truth. Still may not actually be true for you because they may have their own stuff going on and this is … when you’re doing this process. As I say, I can do it really, really quickly and flip it in my head. You can write it out. You can do it with your coach, you can do it me for example, you can do it with another coach. But when you go through the process of how that thought is making you feel and what you who you could be if you weren’t thinking that, that’s where the power is. That truly is where the power is because in a second we can take our response to a situation and it completely fuck us for a day or two or three or four or five or six.

It can be something in your past and all of a sudden you think about it and it paralyzes you. Chances are the other person involved in that situation doesn’t even know because you’ve got the story in your head of what was happening in that situation. It’s not what was going on in that situation for them. So the whole point of this tool is to turn it around for ourselves so we feel better.

Now I’m going to wind up here cause it’s such a good tool. And, while I do this all the time and I use it as a tool and I do it with my clients. I’m not a teacher of the work. And in the Passion test, we use it as a tool. So I do it in that regard, but I’m not a teacher of this tool so I would love it if you went to the work.com and had a bit of a read. Watch some videos, grab her book. I think Byron Katie is an incredibly gifted woman and she’s actually got a great podcast with Lewis Howes that she did that you could just have a Google podcast Lewis Howes, Byron Katie, have a listen to that, that’s really good. Download the sheets. Flick me any questions if you like.

For anyone yesterday that wanted the Wheel of Life assignment, that will be coming out to you tonight or tomorrow, just got to make up a couple more tweaks.

And I hope you’re all signing up for the confidence challenge. So excited. So you can go to W-W-W, seven as in the number seven. Which way should I do at number 7dayconfidencechallenge.com, and you can join me for seven days. It’s totally free. It’s just some fun stuff to do every day to help you build your confidence because I believe we can all build it. Like we can all build it, it’s a muscle, keep it going and it’s the stuff we do every single day that helps us build that. So there’s a challenge for you if you want, otherwise go to thework.com and download the sheets and just deal with some of that crap that is festering in your mind about how you believed a certain situation happened. Cause chances are once you’ve gone through The Work, you will know like absolutely 100% know that it wasn’t true in that moment. You just made it true and we don’t want to do that. Okay, have a great night and I’ll see you all tomorrow.