Evening. Tonight I want to talk about, actually I don’t need my glasses because I’m not reading anything, forgiving yourself. And I’ve talked before about forgiveness and I’ve talked before about being hard on yourself and tonight I want to talk about forgiving yourself. I’ve been crap at this over the years and now I’m pretty good at it because like forgiving someone else for either a true wrong or a perceived wrong, if you haven’t done the work, which I stepped you through last night, forgiveness is really important because it’s that poison. It’s that yucky shit that eats away at you and actually it doesn’t affect anyone else. But it can paralyze you, it can destroy you if you don’t deal with it, forgive things, get over it and move on. It truly, truly can.

I’ve recently got better at this because I don’t want to be grumpy with myself anymore. And I think when we don’t forgive ourselves for something, whether we feel we’ve let ourselves down and it could be about anything. Very typically for women in particular, it can be about weight, you’re trying to be good and all of a sudden you eat something. It can be work-related. You said you were going to do something and you didn’t get to it or you made a mistake. Family, you haven’t been able to get to something or you promised your long lost cousin that you’d send them a crocheted hat and you forgot to crochet or you don’t crochet. And then we think less of ourselves. We, “I failed. I didn’t do this right. I’m a terrible person.”

And shame then can kick in, and shame is an insidious emotion, feeling. And that self hatred, self … all sorts of things feed into it and it can, when not dealt with, it can make you not sleep. It can send you into a downward spiral of sadness. It can get to depression, it can … lethargy. For some people it can manifest itself in drinking too much. “Oh my God, I’m hopeless so I might as well drink too much. Oh my God, I ate that one chocolate, so I may as well eat a tub of ice cream. Oh my God, I didn’t do that work, so I’m not going to do any work for the rest of the week because I’m clearly an idiot and there’s no point.” 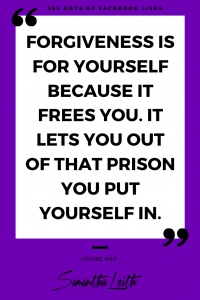 Well this week I said I was going to start doing these lives in the morning because I’m a morning person and I feel better doing them. And so far things have happened in my life and in business where I haven’t been able to do that. So I think I managed one of them, but I’ve had to do an afternoon. I’ve had to do an evening. Today, I literally, I was up at five. I haven’t stopped, I just walked in the door and it’s 09:10. I’ve been doing various roles today, including you may have seen me on Instagram wearing a fabulous hat from one of the costumes from here, the musical, which I’m involved in. And I’ve just walked in the door at home and driving home, I was angry with myself. I was like, “Oh God. I said I going to do the lives in the morning and I haven’t done it or I’m letting everybody down. I’m letting myself down. I’m hopeless, blah, blah, blah.”

So I did that work. I did that thing, the process that I talked you through last night on myself in the car home while listening to some great music, see I could a … and driving. Went past a speed camera and I was okay too. And I did that and I was like, “Is it true that I’ve let everybody down?” Well, the answer’s no because a couple of people come in when I’m live usually, probably no more than 10 ever I don’t think. And then during the next 24 hours, 48 hours, lots of people come in and watch these videos and some people are watching them on YouTube and some of the people are watching them in other ways. I share them so it’s not all about this live moment.

So it’s not actually all about this live moment. So while I’m doing the work on myself in the car, I’m going, “I’ve let everyone down. No, it’s not true. I haven’t let everybody down. I feel like I’ve let myself down. Oh, hang on, I can recognize where I have let myself down in other places. I can see places where other people have let me down.”

So sometimes things have to shift and it’s really important that unless it’s something really critical. If you’re a neurosurgeon and you’ve got to get somewhere on time … No, actually I won’t go with time because I don’t like being late. Most of what we do is not that fricking critical. We think what we do is super, super, super, vitally important to everybody that ever comes across our paths. It’s not. Unless you’re saving a life, it’s not. Or a teacher, I think teachers are just saints. So we need to let go of their baggage.

So I’m going to keep it short tonight, but I want to ask you, what is there that happened today? Chances are there was something that happened in your day today that you’re upset with yourself about, your shitty with yourself about, you might feel some shame around it. And I’ve got a whole other live I want to vet shame because I think it’s something we don’t talk about enough. And another one about anger actually, because women especially, we don’t talk about anger enough and how to express it and get over with it. But look at something either today, yesterday, in the last 48 hours, where you need to forgive yourself. You need to let that shit go and forgive yourself for your perceived failing. Okay?

If you did something illegal, maybe don’t forgive yourself. You know what I mean? There’s got to be something there that’s making you feel icky. And so I want you to go back to yesterday’s video, think or download the work, go onto the work and download one of those forgive your neighbor worksheets and do one on yourself. Do the flip around, is it true? How do I know it to be true? If it’s not true, when were you? But when did I let myself down? Apart from letting all you guys down, and flip it around. Yeah, I’ve let you down. You’ve let me down. It’s all good. I’ve forgiven myself.

You forgive yourself for some shit you’ve done in the last 48 hours and the world’s a happier place.
Hey, Soph.

So have a good night and I’ll be back to normal programming tomorrow with what’s actually on the agenda. But for tonight, just forgive yourself for some crap and get on with it. Have a good night.