[365 Days of Extraordinary] Day 61 Transcript: Are You In It For The Long Game?

Good evening. Happy Friday. Okay, so tonight I want to talk about, that’s a bad angle cause it’s all booby. I want to talk about whether you’re in it for the long haul or the short haul. And what I mean by that is, are you one of those people that needs instant gratification. In particular, I wanted to mention a thing called the marshmallow test, which maybe you’ve heard about, maybe you haven’t heard about. It was an experiment done a few decades ago, in which children were brought into a room by themselves, and they were given the opportunity to have a marshmallow now. If they took the marshmallow now, that was the only marshmallow they got. If they sat there and could amuse themselves for a little while without having that marshmallow, they then got given another marshmallow. So if they could wait, the reward was better. 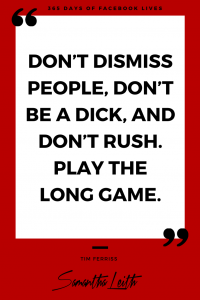 And for children, marshmallows are like diamonds for the dolly, you know what I mean? They’re very, very exciting. So what we do though, in life as adults, is we just prefer things really quickly and we kind of, a lot of the time, we can’t go, “Oh well, just need to wait it out. I need to stick to what I’m doing, stick to the plan. I need to follow all the steps it’s going to take to get there.” And it might take a long time, but we’re in this world where everything’s like this. We want it now, now, now, now, now. We scroll our phones, we want it now. We can’t be bothered making dinner. We use an app and get Uber Eats and it’s here in five minutes. TV, there’s a zillion channels, we can flick, we can change. There’s something to amuse us at all hours of the day or night.

So we don’t get to learn the power of waiting for the fricking marshmallow. What they did though, in that test, was they followed up years, years later with the children that had done it and saw how their life had gone. And it was quite interesting in the fact that the children that had been able to stop, no, no go first marshmallow and wait for it, patiently wait for it and they’d been able to amuse themselves by talking to themselves, playing games with their selves, using their mind or just sitting there, actually achieved better results in life further down the track. I find it fascinating because I’m one of those people, I’m like, I want it now for a lot of things, but there’s a few things I’m doing, in particular, this 365 days of live actually is like, I’m not expecting a result.

I’m just doing it and this is a long haul. I’m not putting a sales video out or spending a fortune doing a video that I want to go viral. I’m in this for the long haul. So I’m surviving the marshmallow test. And probably for the first time in my life, I’m acknowledging that this is going to take time. Nice magenta frock, it matches the marshmallows. That this is going to take a long time and that’s okay. I’m learning slowly at the age of 45, that it doesn’t matter that things don’t happen instantly. So I want you over the weekend to look at where in your life tonight, tomorrow, whenever, where in your life you’re wanting something absolutely instantly, and how that’s a… You know that dress… Oh you do too.

And how that’s affecting the rest of the things in your life. Because impatience is not a virtue. Patience is a virtue, as my father taught me. I don’t even know if that’s true, but I think we have lost the art of patience. So I’m on a mission to try and be more patient, and so far it’s working. And it feels good to not set myself up for disaster by wanting something to happen straight away. So just question yourself over the weekend. Are you getting impatient where you’re in a cafe, did you coffee not get served quick enough? Did the blog posts that you put out not get… Hey Stuart. Not get enough interaction so quickly? Are you getting really, really upset now because your like numbers aren’t going up on Instagram? Get over it. It’s not that big a deal.

We need to really get better at pacing ourselves. It’s a very fast world, and I think we need to all just accept the one marshmallow. So if you haven’t read it, grab the marshmallow test. It’s an interesting book. You can Google it, have a look about it. And there are exercises that you can do to actually witness in yourself where your shortfallings are with patience. You might have excellent patience. And if you do, my hat off to you because you know I’m working on it. Have a great night and I’ll see you all tomorrow. And I’m not eating any marshmallows. Or maybe one.