Good evening. I’m going back to trying to do it on my laptop, which is very exciting. I hope everyone’s well. What I wanted to share today, I actually went to a workshop the other day about LinkedIn and I’ve never been a big LinkedIn user and I’ve been trying to get better at it and trying to learn more about it. Hence why I went to something and I thought I’d actually share a couple of tips-tricks with you because I didn’t know them and I kind of went, “Oh that’s really cool.” Because yeah, if you ever find you go to… I’m terrible at remembering people’s names. Just going to tell you right now. I can meet someone, shake their hand, do the trick and go, “Ah, her name is Gretchen, she’s got green eyes.” That’s how I remember it. Two seconds later, no idea what her name is. I’m notoriously bad at it and I have tried very hard to get better at it.

But a couple of the things I learned the other day, [inaudible 00:01:00] Vigo from one of the women who actually taught it, was speaking at. Was, did you know up here? Can you… [inaudible 00:01:08]. That’s better. Up here in the top corner, if you’re on the app on your phone, there’s like a little four square thing. And if you click that, when you’re at an event and you’re going to meet someone. And you go, “Oh, can we connect?” Instead of handing over a bit of paper, you actually just click on that button and you can either scan them or they can scan you. How cool is that? I sound like a dag. But I thought it was really cool. So if you do it my code, if I did that and hit my code, that’s my little QR code. So then people can scan that and they will instantly send me a connection request. And I can share that code and I can go and scan somebody. So you can do that. 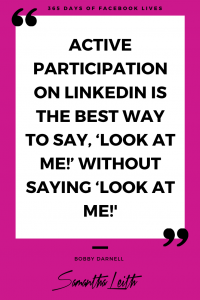 I can save it to photos so I don’t have to go to the app. And then it’s an easy way of connecting with people. So that’s one of the things I learnt. So I wanted to just share a couple of things with you. Then another thing I learned was, just thought this was genius. Years ago I heard from a networking expert, the trick about when you’re out somewhere, have a little code, write something on the back of their card or put cards of people you really want to connect to again in one pocket and cards where you’re like, “Whatever,” in another pocket, of the tricks that when you get home or when you get back to your office after you’ve been at any of these events, make notes of who you met, what they did, why you connected with them, all that kind of thing and follow up. Power as you know is always in the followup.

But one thing you can do, if you’ve just done that connection with someone on LinkedIn. And I thought this was brilliant, is quickly send them, no I don’t want to update my job search. I want to oh, wrong button. See I don’t know how to work it very well. Is and a couple of people have already done this to me from the other day. Send the message going, “Hey, it was great to meet you the other day, baddy blah. Thanks so much for your comment.” This was the bit that got me. “So loved your glasses or great to meet you at such and such. Our conversation about chai was inspiring.” Then down the track when you’re looking at people in your LinkedIn profile and they may have been connected with you on other social media and you’re like, “How did I know them?” You’ve sent them the message repeating how you met them. And you go, “Oh, bing popping ban bang, now I remember.” I’m so going to be using this because as I said, I’m absolutely hopeless at it.

The other one that’s really good and a couple of people have used it for me. I’m just going to try and do this to somebody I know so they don’t… I’ll do it to my bestie, Yvonne, is you can actually now, you may be not able to do it for awhile. I might be slow on the uptake on this, okay. But you can push, just like on your iPhone and doing iMessage and things like that. You can push the little microphone. I can go, oh LinkedIn will like to… exit, allow yeah. “Hi Yvonne, Sam here. We met the other day at the LinkedIn masterclass and I just wanted to reach out and say hi.” Send voice message, [inaudible 00:04:24]. So I’m going to send that voice message. Now Yvonne’s going to laugh when she gets that. She might, “You dick. We weren’t at anything the other day together.”

So I’ll just say this is a test. But how cool is that? Because we’ve all these, it is… I do talk about us not being too connected to our devices. But for tools like this and LinkedIn is, well, as they said the other day, Gary Vaynerchuk is now talking about LinkedIn a lot, so it’s just going to get busier and busier. But more people are using it, especially in a business sense. I recently needed to recruit somebody for something and first place I went was LinkedIn and did a search on the particular title of the person we were looking for. And came up with a few people, reached out to a few of those and we found someone. Easy. No recruitment agency, no ads, no et cetera. Perfect. So it is a good tool.

So then, what was the other one I wanted to teach, what I wanted… I had a couple that I wanted to share with you that I found really, really valuable. The other one is the use of hashtags in your posts. So we tend to think of hashtags, well at least I did, of hashtags being like an Instagramy thing. More and more people are now using them on Facebook, Twitter, they get used everywhere now. But in LinkedIn if you can put up to five hashtags, anymore and… but up to five hashtags I think it is. And then what happens when you’re… they’re now doing more stuff for SEO in LinkedIn. So when you’ve done your post and you put the five hashtags in there, the URL for that post will actually have those hashtags in it so you’re more searchable. So there were a couple of things I wanted to share because I thought they were awesome and reach out to me on LinkedIn because I do want to get better. I don’t, should I be talking about that on Facebook? Oh I don’t know.

Sorry, Facebook. But I think, I’ve worked with businesses, so I do need to have more of a presence here. And I’ve worked with solopreneur, I work with lots of different people. But I do work with businesses, so I need to, get my head around it a bit more. So they were the things I wanted to share with you. So the hashtags, the sharing of the QR code to just instantly connect with someone I think is awesome. The sending the message, fantastic. So you know where you met the person, why you met them, what they’re wearing. So you can remember them in six months time. Because if you’re like me, my memory was crap at 17, at 45 it’s getting even worse. The audio messages on LinkedIn, fantastic. They’re my top tips that I learnt the other day. How cool is that?

So if you’re not on there already, jump over there, connect with me and I’ll see you somewhere in the cyberspace. Happy Sunday. Bye.