[365 Days of Extraordinary] Day 66 Transcript: Why Copying Is Not The Greatest Form Of Flattery

Good evening ladies and jelly spoons. Gosh, haven’t said that for a long time. That was the saying we all kind of said in… That might not have worked or start again. Good evening ladies and gentlemen. Welcome to tonight’s broadcast of Samantha Lee live on Facebook. I had you plugged into my monitor so I don’t think it was going to work. I wonder if anyone can hear me. Hudson, tonight’s broadcast, tonight’s live is, was triggered by something I saw today and fabulous, fabulous woman. If you haven’t seen her, Nicole Arbour, who’s a Canadian comedian did a video today calling out Jay Shetty on a whole lot of copying stuff. So various videos that he’s done, various memes that he’s put out that are clearly other people’s content and he’s used them. Now whilst, and I promise I really would like someone to slap me. No God, don’t say that in this day and age. If you ever think I’ve copied anything of anybody’s and not give them credit where credit’s due, call me on it cause that stuff is wrong people. Wrong.

So this was, if you want to have a look, as I said, her name is Nicole Arb. It’s on her Facebook page. It’s probably been shared a lot of times by now because millions of people follow Jay Shetty and she’s literally dissecting a meme that he’s put up and who actually originally quoted that. Now that’s not cool to call stuff you’re writing your own without actually saying, Oh so-and-so did it. Every time I quote something, Pop a meme up or a quote up, cause I love quotes. I have them all over in my house, I have them on my phone, I have them everywhere. I love them. I always credit the person. Always, always, always. As you’ve heard me speak about things like the passion test or the work or any course I’ve gone to. The LinkedIn thing the other day. 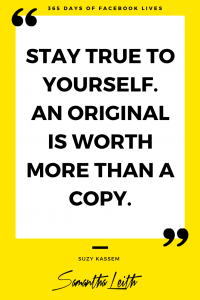 I always credit where I’ve heard the information from now there are only so many ideas in the world like, so chances are at some point people are going to, look at a website and go, I really like that idea. So they take ideas from it, take inspiration. “Inspiration taken from”, that’s okay, but you’ve got to kind of credit the person or make something your own.

My website for example, probably had when I had a built a few years ago and it needs an upgrade. Update rather. I probably had about 15 to 20 sites that I went to my developer with and went, I like this that someone has, I this that somebody else has, I like this or someone else has. But I like, these are my colors, let’s take all those things I like from out there in the internet world and make it my own.

That’s kind of okay to do. Directly copying someone’s website, which has happened to many friends of mine is not okay. And it’s funny, it reminded me when I was in high school, I did my youth three unit music major kind of piece. I did a performance piece and I did a, had to do like a written piece and I did this study because there’s only so many new notes. If you look at a piano, I mean these days are synthesizers, they can get way outside what the normal breadth of what we think is music.

And they can twist the change in, music’s incredible these days. But back when I was doing it, back in 1991. Oh so long ago, there weren’t so many options. There weren’t the amazing synthesizers. There weren’t all the computer generated sounds, all those kinds of things. And I did a study about how musicians actually copied themselves and that was quite kind of, kind of fascinating. And the two kind of the two people I looked at where Andrew Lloyd Webber, CATS Starlight Express, a gazillion musicals. Phantom of the Opera and Claude-Michel Schönberg, who wrote to a couple that you may have, may have heard of. Les Misérables and Miss Saigon, and to give you this example, so here’s a song from Miss Saigon.

So it’s not cool that Jay Shetty’s doing this and has millions and millions of people following him. Now of course arguments will come out today, well he’s doing good and he’s helping people. So do we really care? Hell yes, we care. Don’t copy shit, people. Don’t do it. Other stuff has come out because saying it wasn’t really Mark and or he’s lied about this. I’m not going to get into any of that. That’s his karma. If he’s done the wrong thing, karma is going to bite him in the bum. And I happened to think karma is a really nasty. I’m not going to swear on this live so karma will get you. But I want you to talk about it because we all share things on the interweb. We all do it. We see something on Instagram, we see something on Facebook, we see something on LinkedIn, we see something on YouTube, we do it.

If you’re going to share something of somebodies or you’re going to go, Oh my God, that has inspired me to do something. As many things inspire me every single day. Credit the M mother, rode it in the first place, or did it in the first place. Apart from anything else, you will get caught. It’s universally really, really dodgy shit to be doing, which it will impact your credibility, your earnings, your friendships. Your self esteem for God’s sake. You know, I’m all about helping people with their confidence in business and in life. And can I tell you one way to quickly get rid of your confidence is by copying other people’s stuff because then you think you’re so hopeless, you can’t write your own stuff. It’s not a good road to go down. Ooh I sound like I’m getting ranty. #Samsrants.

I’m not going to get into the politics or the drama of other stuff that people are saying he has or hasn’t done. But if you get a chance, look at her video. She’s incredibly funny woman. Her name’s Nicole Arbor. She’s has massive following. She does great keynotes. Has a successful business from [working 00:07:16] . I don’t know her. Okay. Don’t know her, she’s Canadian, but it really made me look at some of the stuff he’s done and I’m like, yeah, actually. And do it. Google a couple of the quotes that he’s put out and go, Oh actually that was written by so-and-so in 1940 whatever. So you, get caught with your pants down people.

So that’s all I wanted to talk about tonight. If you take inspiration and this live was inspired by the woman herself, Nicole Arbor. I’m going to say it, it was inspired by her rant and video on Jay Shetty. I’ve had to do my own little one because I don’t think it’s cool. So all these books that you see me read, all the courses I take, all the study I do, all the podcasts I listen to. I will, absolutely, without a shadow of a doubt, share some of that good stuff with you. I may write about in a blog post, I might do a live about it. I might, turn some of it into a program with other, stuff. But it will always. Credit it should always be where credit is due. So just promise me that. Okay. So if you’re sharing something inspirational tonight, but you’ve seen a funny video, unless it’s a funny cat video. Oh no. Credit the cats as well. Credit who came from, okay.

Much love to all of you. Do we like my new nail color? I don’t really like it. It’s a bit too gray. I’m not a very gray person. Only needs to last three weeks though. I will see you all, tomorrow.