[365 Days of Extraordinary] Day 7 Transcript: Why you need an advisory board

I mentioned the other day that I have an advisory board. A friend actually messaged me and said, “Who’s your advisory board? Where do I get one of them?” Well, I’ll tell you the truth. They don’t know they’re my advisory board. Usually and generally in business, if you’re in a startup, especially in technology or any of those big businesses, you’ll have a strategic advisory board, and they’ll come on to help you guide your business in the direction that you want it to go in. They’ll all have a special area of smarts that is their thing.

What sometimes, as entrepreneurs, what we do, which is a big mistake, is actually make our friends and our family our advisory board, and often this is the worst idea ever because believe it or not, friends and family are not always the best people to talk to about what you’re doing in business, in business in particular and sometimes in life as well. They have your best interest at heart, but they don’t want to see you fail so often if you go to them with an idea or a plan or a new product or something like that, they don’t want to see you get hurt or fail, so sometimes they don’t encourage you to do it because they have that fear factor for you because they want you to be in your safe little nest. It’s not that they don’t want you to succeed, but it can sometimes, especially with family, be really hard to let that go. 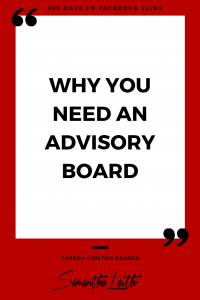 Every time I’m at a point where I need to think about something in particular that I want to do in my business and actually in my life as well, I will often ask myself the question, as I’ve got printed here, ask myself, what would da, da, da do? I’ll show you who mine are. You can see them now. They’re my information above, if you can that small.

My advisory board currently consists of the amazing Mel Robbins who is an incredible speaker. I reckon the best female speaker in the world. If you’re going to disagree with me, well, then, put her in the top two. My next advisory board member is exercise maven herself. Actually, I don’t want abs like Jillian Michaels, but she worships her body, so I think that’s a good one to have. I’ve got Nigella because who doesn’t want to be a fricking goddess in the kitchen? Oprah because, well, Oprah has been smart from the get-go. Every move she’s made has created this incredible thing. If I can put myself in her head when I’m asking myself a question, I think that’s freaking awesome.

Yes, The 5 Second Rule, five, four, three, two, one, is an amazing book. Love Mel. I have Sara Blakely from Spanx because, man, she created a business with 5,000 bucks on a dining room table to sucking our guts, and it’s a phenomenal worldwide thing. I just wish you could buy more Spanx in Australia or they did international shipping, if anybody is listening from the Spanx organization. I’ve got Dita von Teese, who I have actually met in a bathroom in New York. It was like meeting someone who had been PhotoShopped in real life. She was perfect. Not a whisper out of place with this amazing skin and she’s a sexy girl. Again, created this incredible business based on something she’s … It’s talent-based and passion-based. Burlesque is her thing.

I’ve got Marie Forleo. A lot of my friends on here will know who Marie Forleo is, Marie TV, if you ever get a chance to read it. A great entrepreneur, puts out so much goodness to the world and really, really smart operator about how she’s built her business based on what she wants to do. I’ll confess. I used to sometimes look at Marie’s business and go, I’ll probably get bored just doing B-School in my videos. Now I look at her and go, oh my God, that woman is a genius.

I’ve got the divine Bette Midler because, well, her attitude and she’s survived decades in an industry where often people only survive five minutes, and I think that’s well worth asking myself a question. What would Bette do? Especially if it’s involving a show I’m doing.

Last but not least, we’ve got Queen B, Beyonce. Not only is she talented, sexy, talented, sexy, talented, sexy, super smart, like her business acumen, her negotiation skills. I know she’s got a team around her and she has a machine that is Jay-Z by her side. The deal she did with Netflix alone for Homecoming, if you haven’t seen it, watch it. She didn’t get paid as much for doing Coachella as many artists have been paid to do Coachella. However, she got this backend deal with being able to do the documentary for Netflix. It will go on forever for her. In my mind, her business smarts are above and beyond anything. The fact that she can run on a treadmill while singing just like all hail Queen B.

They’ve all walked roads that either I have an interest in personally or I have an interest in a business sense. Who would be the least? No, they all do have something. I used to have this saying. I might have even had it on my Tinder profile years ago. I’d like to be Nigella in the kitchen, Dita in the bedroom, and Sara in the boardroom. That will be Sara Blakely from Spanx, not my sister. I do love my sisters here, but no, not her in a boardroom. How is that for wanting motivation from people out there in the universe that have no idea who you are? I didn’t say who the other person I met. I had met Marie Forleo as well at one of her events in New York, which was fantastic.

What do they all have in common that draws me to them and draws me to want to have them on my book, Virtual Board of Advisors? They all have confidence. They know so deeply within themselves that they are doing what they were put on this earth to do. They can fail, and they’ve all failed a gazillion times. Their success is built on a great big mountain of lots of small failures, every single one of them, and they keep going. They just keep going. Even Beyonce in Homecoming, she’s allowed this documentary to go to air and there’s one number where I noticed it because I’m a bit of an idiot like that, where one of her straps on her stockings came loose. It went to air. There would be many, many people that will go, it’s not [inaudible 00:07:41]. They can’t put that to air. She just gets out there and bloody does it. Incredible.

They’ve all got charisma in boatloads. Remember, charisma is about how you make other people feel. Every single one of those women can walk into a room, can be in an event, could be sitting on a video like this. They can write to you. They can sing a song to you in some way that is charismatic and draws something out of you, either to make you feel something, make you do something. There’s a response there somewhere, and it all comes from their charisma.

They’ve all got incredible courage. They all have been put on this planet and gone, you know what? I’m doing what I was born here to do and brought here to do from, if you believe in God, whatever you believe, in the universe. We’ve all got a reason for being here, and it takes so much to actually get the balls, the cojones to actually do that. Every single one of those women has done that.

I encourage you all, and you don’t need to tell people. This is the first time I’ve actually shared with anybody who’s on my board of advisors. If I ever get to meet any of them again or any of the others, I’ll be going like, did you know that in 2019, I used to sit with my diary and go, hmm, can’t be bothered going to the gym today. I’m tired. Oh shit, Jillian Michaels would tell me I have to go so I better go. That’s literally what I do, as well as the five, four, three, two, one from Mel. Cooking dinner, and I’ll think I’ll just do something boring. That’s not what Nigella would do. It’s such a little thing, but it really, really, really helps me.

I encourage you this weekend, if you’ve got a spare five minutes, and I did this on Canva. Canva is an amazing tool. Don’t tell anybody. I did just get those photos from Google. Oops. You’re not meant to do that. Create your own little advisory board. If you’re a young mom or a young dad, a new dad, you might want an advisor, someone on your board that’s a really great parent. There’s all sorts of things. It doesn’t have to be business and personal development related or cooking or sex like mine are. I really do encourage you to do that.

That’s all for me tonight. Happy Saturday, winter solstice, shortest ass day of the year for raising my tits off all day. I’m going to have a bath and put on a face mask because that’s what you do when you have a Saturday night at home alone because your plans got canceled. I will see you all again tomorrow. Bye.