And some of them that I’ve heard people talk about is… I should’ve just took them off… is put your glasses on. That’s when you sit down to work. I only need them for reading and my laptop. So that probably wouldn’t work for me. Some good triggers are a bottle of water by your desk. First thing when you get to the office in the morning… When you leave in the afternoon, rather, you leave a note pad out with what you need to get done the next day, and that’s on your desk so that when you come in, in the morning, that triggers you to do what’s on that list, rather than you having to think about what you need to get done. 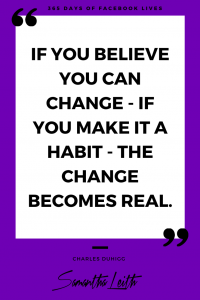 Some of the other triggers that you could do are, like I do, is I have alarms. I’m notoriously bad at drinking enough water, especially in winter. So I have alarms on my phone. Every hour they go off with a reminder to drink water. And some of the phrases I have in there are things like drink water, you are not a camel. Slosh, slosh, hydration is good for your skin. Stuff like that. So some of them are funny, some of them are quirky. I also have triggers in my phone that tell me it’s time to start winding down and going to bed. Like when that trigger happens, that alarm goes off, I know it’s like phone away. It’s time to do that de-stress, de-compartmentalize the day, chill, take my face off, have a bath, do all that kind of stuff I like to do at night. And so those are good triggers.

What are some other good triggers you could have? Ah, sorry, itchy eye. Things like a meditation. Instead of your alarm going off in the morning, set your phone so that… You shouldn’t really have your phone in the bedroom, but most of us do. But set your alarm to actually be the meditation, so that starts your day off correctly. Starts it well for you. Another trigger could be, you know it’s time in the office, for example, to take a break, go to lunch, have a de-stress, when your lunch arrives at the same time every day.

I know someone that has this organized. So they have three breaks during the day. Someone arrives with their coffee in the morning at a particular time. That’s their trigger to get up from their desk, to walk, have their coffee, chat to a couple of people. [inaudible 00:03:12]. Another trigger happens when their lunch arrives. Again, they leave the office. So trigger, the food arrives. They have to leave their desk, what they’re doing, actually go somewhere else, have a decent lunch break, get some sun, some fresh air. That’s their trigger to do that, otherwise they’d just stay at their desk. And then later in the afternoon they have a juice that arrives. So three times a day they have an absolute physical trigger to get up from their desk, do something for themselves, rather than just sitting there staring at a screen.

You can have triggers. IFTTT. And you can set up triggers in there, so for like a weather alarm, or on your way home the heating comes on. So we can do triggers… Sorry, that was my phone. I should have turned it off. Bad trigger. So I want you to look at it, in the next 24 hours, what other triggers can you implement in your life that could maybe start forming a couple of new habits. Perfect one, and this has been talked about for a gazillion years by a gazillion business people, motivational people, so many people, is have your gym gear, like your running shoes, anything like that, just next to your bed. So when you get up in the morning, the first thing you do is actually do that and get exercise, rather than rolling back over or scrolling on your phone, doing that, you get up and actually do something.

So what’s a trigger that you can implement in the next 24 hours that could make a positive impact on your life? Just one. Just one. That’s all it takes to start a change in your life and forming a new habit. What does that do? Increases your confidence muscle. What happens when you get more confident? You can achieve more goals. So it’s this, like it’s all good stuff. So pick one thing you can set a trigger for in the next 24 hours and change your life. Like when your kid gets home… When… kid, that sounds terrible. When your child arrives in the afternoon, set yourself a trigger of some kind that means you’re actually present with them. You don’t get involved in other stuff.

There you go. One trigger. Let me know what you’re doing, and I’ll keep you updated with how I’m going with my triggers, because I think I need to add a few more and change a few. Okay. Have a great night. Bye.