Okay, let’s try this again. And now it says, “Pointing at my connection!” Okay. I think we’re working. So today, happy Monday. I wanted to go through… As many of you know, I have written a book called Go For Goal’d, which is Goal’d as in… I was about to shoot a hoop, but I don’t play basketball, achieving goals. And it’s comprises of 52 tips about going for goals. And then it’s also got some stories interwoven in it, and other people’s experiences with goal setting.

I wanted to share with you another one of the tips. I’ve done one of them, but I thought, “Today I felt like doing this one.” So this one’s tip two, which is; know that you can achieve any realistic goal that you’re truly committed to and work towards. Tip two of the book, and we haven’t actually set any goals yet, but anyway. Trust me, this is important. It’s about building the foundation for your success.

In the first tip, we looked at, and we’ve done this one, accepting and moving on from past non-achievement. Looking at it not as failure, but as, “Shit just happens.” And there’s exercises involved, et cetera with them. So if you still feel… if you have listened to that one… I can’t remember what number it is, ooh. You can find it on YouTube. So if you want to go back and have a look at it, go for it. And if you feel like you need to rethink and rehash a particular event, do the exercise that I talked about on that one again, until you purged it totally successfully. 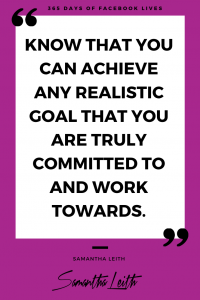 This tip is all about focusing on past successes, which I talk about in the confidence challenge as well. So in fact, let’s focus on one, your most cherished achievement. You need the memories of your successes as something to reach for in any moment of doubt. Like any of those crap moments, you need to be able to go… Pluck that success from the recesses of your mind and relive it. And it just does everything for you.

I want you to go back to time of your best success and visualize it, feel it, happily relive it. Also remember, that you didn’t necessarily set a goal for the achievement. It may have just been something that organically occurred, which is, what’s important is the achievement itself, not how that achievement happened to be.

I want you to ask yourself three questions: How did you feel at that moment and in the days afterwards? Were you able to do more at work, home, and socially afterwards? In other words, did the achievement empower you? And how did that achievement empower you? Number three, did you have more energy, feel more alive? I know, when I achieve something it’s like, “Popom, popom! I don’t need eight hours sleep, I can do anything. I don’t need eight hours sleep.” And normally I’m like so need my eight hours.

Number four, do the troubles in your life appears somehow smaller and less significant? That’s a big one, because when you’re in those moments of achievement and some bump happens, it’s like, “It’s just a bump.” Whereas, if you’re in a mode where you feel like you’re not achieving anything and a bump happens, it’s almost like you’ve got to climb Everest for a little bump.

Number five, the last question is, how did you think others viewed you? So you shouldn’t actually care how others view you, but for some people that does drive achievement… And as you go through the book, you work on needing that less and less. And as you go through a lot of stuff you might work on needing that less and less. Hello, I was bouncing around at the gym this morning, and I didn’t care what people think. So, believe me, you can get to a point where you don’t give a… Okay.

I want you to ask yourself those questions. I want you to take a mental picture of how it felt like. Let all those feelings just re-emerge within you. Soak it in. If you’ve got any physical reminders of that success, even better, like a trophy, a star stamp. I do this on accounting stuff because it makes me feel [inaudible 00:04:16]. Anyway, another story.

If you do have physical reminders, hold them, display them, take pictures of them, put them on your phone, in your diary, on your screen savers, anywhere. Whatever helps you to firmly re-imprint that achievement in your mind is worth it. Trust me, totally worth it. Remember what you were thinking and the actions you took to achieve the goal. And again, if it wasn’t actually goal, but it was an amazing achievement, the same thing. Think about your mindset. Were there any obstacles that you faced and how did you overcome them?

We can overcome obstacles more often than we actually think we can. But sometimes we actually don’t think they are obstacles. And it’s not till we go back and look at them again and we go, “Oh my God, that was a big obstacle and I solved it. I came up with a solution. I jumped over the mountain.”

You probably did some things that were totally beyond you to get that achievement. And totally, they weren’t what you’d done before, they’re way out of your comfort zone. And I want you to think about how that memory could help you know that if you set another realistic goal that you’re committed to. Because remember, you got to be committed, otherwise not going to happen. Are you going to achieve it?

For starters, the achievement you’re remembering, it’s got to be realistic. So if it was something… if you did a one off wet shirt competition in Bali, it’s probably not realistic to use that as a cornerstone for your next goal achievement, unless you travel the world during wet t-shirt competitions, of course. Which some people might do, you never know. No matter how impossible it may have seemed at the time though, the fact remains, you achieved something. Yay!

Second, you had to be wholeheartedly committed to it, otherwise you wouldn’t have achieved it. That’s the point. We might not actually think we’re committed to something, but if you achieve it, you’re committed. It kind of goes without saying.

Finally, if you didn’t have to work towards it at any point, you wouldn’t have achieved it. You got to put in the work. It’s not dream it and it’ll all happen. It’s dream, believe, act and achieve, dream, believe, act and achieve. You just drum that into everybody. It’s not dream, sit back, go, “La la la la la,” and it happens. Not like that, at all.

You want to think of that memory, it’s like this huge pink diamond. I don’t have any of those. All shiny and worth an absolute fortune. You can face moments of doubt, obstacles, frustration, even bad luck. And you can pull out that diamond out of your brain at any point, and remind yourself that you achieved something. And when you remind yourself that you’ve achieved something, you think you can do it again and again and again and again, again. You’re really capable of doing anything.

You’re not keeping that list so you can be at a dinner party and be the most annoying guest going, “Oh, I did this and I did this and I did.” This is not a brag bag, but it’s a reminder of how capable you are, how capable we all are. Remember, it’s that bright, shiny diamond inside your mind that you’re going to just going to drag out to make you know that you can do something.

As you live your life, like we all have these… hopefully we’ll touch [inaudible 00:08:25] really, really long lives. You have memories and many moments of achievement. And if you hold those close to your heart, they’ll overshadow the moments of non-achievement. Like they really, really will. And you can think of each achievement as a single candle flame, just a single candle flame. And when you’re in that dark room feeling like you can’t do anything and the world’s a terrible place and you’re not going to achieve what you want, what would that candle do? The candle would light the room. The Candle takes away the darkness.

So that memory of that one achievement, it’s like your little flame. Whatever metaphor you like; the diamond, the flame, something that is a light that you can just grab onto whenever you have a doubt in your mind about what you want to achieve, to light the path for you. And the more you achieve things, the more diamonds you add, the more flames you add, the more candles you add, the more lightness you get. And then you’ll get to a point where it’s like, “Oh, I’ve set that goal. I know I can achieve that because I have this past knowledge of achievement. I have this gorgeous little box of things I’ve done. I have these candles in my mind of all my achievements.” I want you to really luxuriate in memories of success and hold them dear.

I think too often we teach young kids that everybody’s a success and everybody gets a badge at parties. Everybody gets a prize for going in the race. And then we get to life and we kind of slap them down and go, “Well, actually, no, you don’t achieve. Only winners are grinners.” That kind of thing. I think there’s a middle ground. I think we have to celebrate the small wins and hold them dear to our hearts. I think that’s really, really important.

That’s my tip. My goal… goalie? Goalie? No, it’s not a good way to go. That’s my goal tip for today, which it’s just, enjoy the memories of your successes. They’re really, really important. Share some with me. Let me know what you’ve been successful in today, yesterday, whenever. I want to hear them. Okay, bye.