[365 Days of Extraordinary] Day 73 Transcript: Do Something For The First Time! 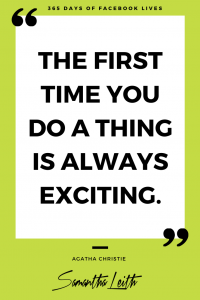 And it just shouldn’t be that hard. Like we get stuck in these, I’m not going to say boring, because I don’t like the word boring, but we get stuck in the rhythm of our lives and I think that’s a shame. I think there’s just endless opportunities to try new things and do new things. Whether it’s a different kind of class, whether it’s a language, whether it’s… I’ve had, I think, three friends this year that have done stand-up comedy for the first time. How awesome is that? Pushing you outside your comfort zone is going to increase your confidence just tenfold, just by the act of actually doing it. As well as the excitement and the adrenaline lash and the endorphins and the dopamine and all that stuff, we’re actually doing something new.

Now I think I’ve talked about this a little bit before, so apologies if it’s a bit of a double up, but it really hit me today and it made me think, what am I going to do next for the first time? Doing this live thing was something new for the first time. I’m contemplating, I’m tossing up a few themes. Over the years I’ve done pole dancing. I’ve never done standup comedy. I don’t think I’m going to do that, though. But there’s heaps of things I wouldn’t mind trying.

Thanks, but messy. The higher the hair, the higher closer to something, I don’t know. So that’s your challenge. The next 24 hours, come up with something that you’re going to do for the very, very, very first time. Send me a message and let me know what it is and I’ll tell you what I’m going to do too, okay? Have a good night.