Good evening. Welcome to this wintry, blistery night in Sydney. Crazy, there’s only a couple of days left in winter, but life’s bizarre isn’t it? And it’s just horrible weather.

I’m going to have a rant, so forgive me. I was disturbed this evening to read a post in a group I’m a member of, where someone had made a comment about her business, which is an MLM or multilevel marketing, direct sales company and she was talking about a multitude of things and she just got hammered, like nasty stuff, not nice stuff. And regardless of, I will talk about MLM in a minute, but regardless of what business you’re in or what industry you’re in, I said this the other day, don’t be a dick. You don’t need to be an armchair warrior. You don’t need to be a keyboard warrior if you… But keep your comments nice, people.

Don’t be nasty. I don’t like it. I don’t like it. I don’t like it. And if you don’t like MLM, don’t do it. You know, many people have an understanding of MLM as being rip-off or heard old stories from their parents about some Amway party in 1950 and it’s left a tarnished taste in their mouth. It’s not like that anymore, people. It’s really not. Thanks Kitty! And I used to be a hard driving sales manager with Nutramedix and I absolutely loved it. I stopped doing it because I had a baby and I was a single mum and it didn’t actually fit in with my lifestyle. Otherwise I’d probably still be doing it. For many of my friends in… I have friends in Nutramedix, Innio, doTERRA, Rodan and Fields, lots of businesses, Isagenix, that make multiple six figure earnings. 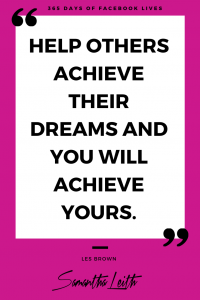 Love what they do and have great lifestyles and support a shitload of people… Thank you Tracy! I’ll see you in a few weeks at UBW. And I just can’t stand that some people may have had one off experience and bag the whole fricking industry. It is not right. If you’ve had some sleazy, slimy person message you on social media, on Facebook saying, “I’ve got a great business opportunity for you.” It’s not about the MLM, it’s not about the company they are working with. It’s about their stupid antics and them being a dick. Okay? It’s not the industry. If you don’t know much about it, don’t bitch about it. So that’s my MLM rant on that. But the point about being nasty at all, is when you’re in a group on Facebook, for example, of business women in a group and someone is there to talk about their business… Okay, if you have concerns about what they’re doing or you think you have some valuable advice, offer it, but be nice.

Before you type, think to yourself, “If someone was sitting in my kitchen, having this conversation with me saying this, would I ever want to see them again?” And if the answer to that is, “No, I’d think they were being a bitch.” Then don’t write it. You know, just because you’re typing on something doesn’t give you permission to be a dick. Oh, I’m grumpy. Sorry, I get weird. I get upset about this because I think you need to… We think computer screens and phone screens and technology give… Exactly, you just hide behind your keyboard, get out and do something instead of being a keyboard warrior. You know what? If you don’t agree with what they’re doing in business, don’t join their business.

If you don’t like their products, if you’ve had a bad reaction from one brand of skincare, don’t use it again. Make a complaint to the company. Don’t bad mouth what someone is trying to do with their life because of your experience. It’s just not good. Karma is a bitch. I have to believe in karma. I think we all do and it will bite you in the bum one day and it’s going to hurt. So don’t be a dick. There you go. That’s my little rant. Totally not what I wanted to talk about tonight, but it actually really upset me because for some people in that industry, it has been life changing for them. For some women they might be able to… When their husband’s home on a weekend, they get to go out on that weekend and go and sell some products that they passionately believe in and earn enough money so they can buy the shoes they like.

Or they might earn enough money to help pay the electricity bill or the grocery bill. For other people, they build multimillion dollar businesses doing what they love and helping and supporting other people with a product they’re passionate about, okay? And for anyone that’s going to go, “Oh MLMs are just a great big pyramid scheme.” Yeah, just don’t be a dick. It’s perfect. Yeah she’s [inaudible 00:05:21]. I ordered some shoes online yesterday and they did not come in the right color, first time I’m ever returning something I bought online, totally off side. But they’re my favorite shoes, the Nine West Tatiana.

What was I talking about? Oh, back to what I was talking about. So some people say MLM is just a big pyramid scheme. Well, you know what? Most businesses are, there’s some guy at the top earning shitloads. Then there’s the next level down, earning a little bit less. Then there’s the people down there running a little bit less and there’s more of them. And then down the bottom are the 10 000 people working on the factory floor, making all the product to keep the guy at the top really, really, really wealthy. That is so many businesses. It’s not just direct sales and there are people out there with true pyramid schemes that are ripping people off. Yep. I’m not going to discount that, that does happen, but for the majority of people in Australia in particular, that have started their own independent consultancy working with any of those companies. You’ve heard me name a few, there’s truckloads more, there’s jewelry ones, fashion ones, all sorts of ones. It changes their life. Some people get into it and don’t get the right training unfortunately, or the right support and sometimes people can lose money that way.

Absolutely, they get in and they want to get… It’s like a bright shiny… Night-night… It’s like a bright shiny mirror ball. You know, we get really distracted so some people can jump into those industries and they’re searching for an adrenaline rush, that endorphin hit, that dopamine buzz that they get from getting to the next level or the next incentive or the next something. And if they don’t have the right training and the right support, yes, some people can lose money, can get disheartened and all that kind of thing, but it is not the whole industry or they don’t stick with it. Absolutely. Totally agree.

So unless you’ve been there, done that and know exactly what you’re talking about, shut the F up and don’t bag what other people are doing in business, okay? There are many… I’ve got friends that are looking at me doing all these lives every night thinking, “Well, what on earth is she doing?” You know, I don’t care. I’m doing it because I’m really enjoying it. And you know what? I didn’t do it to get extra clients. I didn’t do it because I want fame and fortune on doing Facebook lives. Because I don’t think it happens like that. I did it because I wanted to get out of my comfort zone and get used to being more on camera without having my hair and face done. And all frocked up. I’m loving it. And you know what? I have got some extra clients and I think I’m getting better at it and I’m just really, really enjoying doing it.

And I get to do these crazy rants occasionally, but if you don’t like what I’m doing, okay? Concentrate on your own thing. There’s a great saying, “If it’s not on your carpet, don’t get involved.” You know? Just don’t. You’ve got your little circle of influence. Stay in that circle of influence. That’s what’s important. So that’s my rant over and out. I’m going to go and have dinner now. And what else am I going to do? Anyway it doesn’t matter. Have a great night and I’ll see you all tomorrow. And hopefully it will stop raining. Bye! And in the meantime, support a friend in business. Sorry, I went to a opening the other night of a friend’s shop. She has a jewelry business. Amazing jewelry, beautiful. So many people out there supporting her in that opening. She’s been in business for a long time, but this is a new shop, shop front, many friends and people there supporting that. If that energy got put into a lot of people that had just started their own little direct selling business, it’d be a different story. Guys, be supportive. That’s my message, okay? Muah! Night-night.