[365 Days of Extraordinary] Day 83 Transcript: A Stranger Walks Into A Room….. Conversation Starters That Don’t Suck.

So conversation starters that don’t suck. Recently I’ve been at a few social situations with a lot of people who I don’t know, and so you’ve got to kind of start from the beginning of rapport building and finding out who in the room you want to talk to. Find out who you can talk to, find something in common with them. And all those things take confidence, they take charisma, they take guts, courage. You know, the three things I talk about, confidence, courage and charisma to start conversations with complete strangers. So starting conversations with complete strangers that don’t make you look like a dickhead. That’s another skill because going up to somebody going, “Oh, hi, nice weather we’re having, it was pretty blue today. Yeah so prime minister’s doing a good job.”

That’s not going to build friends and win friends and influence people. You may have read the book, great book. I should reread that. I haven’t read that for years. And one of the things in my confidence challenge, if you haven’t taken it yet, is there is a day all about starting conversations with complete strangers. It is a skill and it’s something I think you need to practice and I think it’s something you get so many opportunities to do. It’s one of the few skills actually that you could literally practice every single day without actually having to make much effort. Because every day there’s going to be a situation where you can start a conversation with a stranger and the more you do it, the easier it will be for you to be in situations where you can slip into rapport with someone and you can, it sounds a bit rude, and slip into a rapport with someone and start a conversation and hopefully keep the conversation going. Maybe meet a new friend. Maybe start a new business relationship. You never know where a conversation is going to get you. You know, you might find a new lover. You might… Why I say that word and I get distracted. I don’t know. But there’s so many things that can come out of our first conversation. 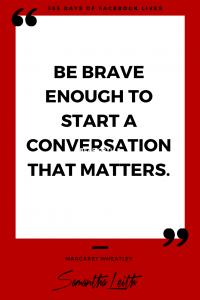 Every single relationship in the world started with the first conversation. At some point there was a first stranger conversation. So how do you do it without sounding like a twit? Okay. Because we… None of us want to sound like twits. I sure as hell don’t. So I just want to give you some ideas. To start with, try not to have closed conversation, so have open questions when you talk to somebody. So instead of saying, “do you like black pens” when they can just go “yes or no”. That’s a closed question. It’s going to be a really stilted, boring ass conversation. If you say to them, “Oh my gosh, there’s so many colors in the rainbow, what’s your favorite pen to rock, color pin to write with?” Then they might go, “Oh, I actually really like writing with fluoro pink.”

Their what the conversations starts with. That’s awesome. “What made you start to like fluoro pink pens” and there might be some random conversation about a science class and you’re 10 when they got their first bunch of fluoro texters and they fell in love with fluoro pink pins. Random, random, random, random. But people will remember you for the most random conversations. Talking about things like fears, talking about if you’re at a party, for example, how did they have they made the person having the party? You know, I was at a party last night and when someone asks me how I met the host, I actually met her for the first time in New York before we all got sent away from a conference because of a hurricane. Random place but that was our conversation starter last night, which started quite a great conversation.

Talk about trends, give a compliment. Especially, it’s funny, I don’t think enough of us give compliments to people, either women to men or women to women or I think sometimes men are afraid of compliments to women because they think they’re trying to hit on them. Like give a compliment. If it’s a genuine compliment, do not tell someone you think they’re tops nice if you think their top is dog ugly, you will come across as insincere and the conversation would be short lipped. And if the conversation is not short lived in the person ends up falling in love with you, they’re going to work out that you’re a lying idiot and it’s not going to go anywhere. So just don’t do crap like that.
Sorry I’ve got the sniffles.

Fears or another kind of fun thing to talk about cause people have random fears. I have a fear of those ball pits. So if I was at a dinner party or at a party and someone asks me a question about fears, I’m going to talk about those ball pits that most people put their kids in and I couldn’t get out of one once and someone had to come in and get me out of the thing. I walk past those things now. You hear the stories of kids that are people that are afraid of clowns. I’m like that when I see a ball pit. It’s like, you’re hell. And it’s completely random. But that would be a good thing to be in a conversation.

Success is a great thing. Everybody has a different idea about success. So asking someone about what they think of success or failure can actually strike up a really interesting conversation because it’s so not personal in a private kind of private part’s kind of personal, but it’s a personal belief thing. That’s a good thing.

Values are good conversations. Don’t do the “so how many boyfriends have you had?” That’s a sleazy, sucky question. Don’t do that one. But asking someone what their guilty pleasure is, that could be fun cause they’re guilty pleasure might be eating Magnum ice-cream in the bathtub. Okay. So it can be a bit interesting.

Crazy weather things they’ve been in, travel, food, morning person, nighttime person, routines, how they distract themselves on the internet. There were many, many, many, many, many things. But number one, when you’re starting those conversations with strangers, make it open.

Say you’re an accountant and you start a conversation with someone and they happen to have a favorite maths teacher, you know and you’re an accountant who happens to love maths. They don’t all love maths. You could spend the next 45 minutes for the person talking about algebra and that to you two would be really, really interesting. So you found something in common. For me that would bore me batshit and I’d like to start talking about Nigella. But once you find that thing in common to talk about, it’s really easy. It’s like a board just goes bounce, bounce, bounce, bounce, bounce and keep eye contact with the person. Even if you don’t know them. Some people find eye contact a bit intimidating and a bit kind of… If they just made it for someone in the first time, they’ll look down a little bit or they’ll look over a shoulder or they’ll fidget on their feet or do that kind of thing. You will get a better connection with the person if you do make eye contact you like without a shadow of a doubt. Don’t do that “come home with me” kind of eyes within the first couple of seconds unless it’s a different kind of party. But having that eye contact will definitely help with keeping that conversation bouncing.

What are some other cool ones? Stuff about their home is cool cause people like to… Here’s the thing people are talking about themselves. We do. Okay. Absolutely. It’s a human fact. Most people are talking about themselves so ask them what a passion project they’re working on is. Chances are if someone starts talking about a passion project… A friend of mine, her passion project is working in a soup kitchen. Twice a month she does it. She starts telling someone about that as her passion project. It all opens up a whole lot of conversations. You can talk about politics, you can, again, politics… judge that one on a per basis thing. Not everyone should talk politics especially in a social situation. But it can bring up a whole lot of things about social hierarchy and wealth division and society and all sorts of things. So that can be a really interesting thing when someone just based on asking them what their passion project is like a philanthropicy kind of thing on that regard.

What would you like… this is something to remember. What do you wish someone asks you in a first conversation. Chances are someone else would also like to be asked that. So if there’s something that you would like to have the opportunity to talk about with someone, ask them that question. Maybe they’ll ask it back to you and you’ll get to share what you actually want to share. Next time you’re at a party or a coffee shop or anywhere where you can have a conversation with a complete stranger, don’t wave a pink Fluor pin at them. Have the conversation and let me know how it went.

From what are you doing next weekend? Or what did you do last weekend? To a fascinating question about their day or a fear as I said. Just go for it. I could probably do it if I just sat down now and what’s been dedicated and write 220… lets pick a number: 220 conversation starting questions. In fact, I’m going to challenge myself to do that. Shit. I just said that live. Yeah, I’m going to come up with 220 conversation starters and I will post it in here some stage in the next few days and probably I’ll do it in this live so you can all see it cause I think that’d be cool. Would you like that? I think that’d be a good thing to have. So until then, if you get invited to a party, let me know how goes.