Happy Friday and I [inaudible 00:00:03], okay; connected. So Friday I sometimes do fun things. I mix it up a little bit. Tonight I actually wanted to talk about something that’s happened this week. It’s a worldwide event. So on about the 10th of September every year, the world talks about suicide and I think the steps that as a world and the organizations that are behind all that are taking, I think are just phenomenal and fantastic and I’m cheering along.

This year I actually didn’t post anything on “R-U-OK Day”. And I went to do it and, for some reason it just didn’t feel right. I don’t know what it was. And I did some thinking about it, and I think because I, like many other people, think we need to talk about it more often. We need to ask people more often.

I myself say my two greatest failures in my life where my two suicide attempts. Thank God I effed them up because I am so grateful and so blessed to have the life that I have. Now, had anyone known me at those two points in my life, I’ll let you know. I was 11 my first attempt and I was about 21 might’ve been [inaudible 00:01:40], it was probably the end of my 21st year, with the second attempt. And most people externally who knew me would have been “eh, Sam’s fine. No, Sam’s got no problems”. Well, that’s not true, I did have problems and thankfully, as a world, we are getting more educated. We’re getting so much more emotionally intelligent now; I think. It’s my perception of the world, anyway.

I remember having this phone call with my mother and I was desperate. I was so down and I’m 45 now and I can remember her words to me, “you have nothing to be depressed about. Snap out of it”. Now that came from a place of love, absolute love from my mother, so I have no anger towards her whatsoever, but I was really broken. I think I was in hospital two days later. I really needed help. Now for me, it’s not a history of depression. I don’t suffer from clinical depression. I happened to have two depressive episodes and they were brought on by me; my inability to deal with circumstance. And I really, touch wood, my desk is wood, I touch as much wood as I can. I’m a completely different person in a completely different place. 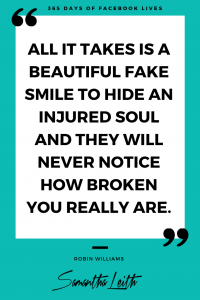 But, this happens every day, every single day. I think it’s nine people in Australia a day, commit suicide. And that is not good enough. And we know the statistics are that its such a greater problem for men because we still as a society, so many people won’t drop this machismo bullshit of “Men don’t show their true feelings”. And when the brave, beautiful men out there do share their true feelings, sometimes they get hit with, “you know you’re sissy. What are you, gay?” You know, and all that crap, and it’s not good enough. We have young boys that are suffering from anxiety and depression and they’re scared to talk about it with people because they think they’ll get labeled as something. And I don’t know what the solution is. I think there’s also a difference in, and I’m not a trained psychiatrist or psychologist by any stretch of the means, but my take on it is there’s a big difference between people that suffer from a clinical, chemical depression such as bipolar or schizophrenia or something, or someone who’s going through depressive episode.

So I think what I’m wanting to talk about is the depressive episodes where people don’t feel that they can reach out and talk to somebody. People don’t know who to call. And we can have all the signs up in the world of “call lifeline” or have the “R-U-OK Day”, which is a brilliant initiative because people actually ask the question, but why can’t we ask it every day? Why can’t someone feel that it’s okay to unburden themselves with what’s going on and the hurt and the pain and how low, how blue, how black they’re feeling at that particular moment. We don’t want to, and that’s that word burden. A lot of the time. You don’t want to burden our friends with what’s going on in our lives. A lot of the times we don’t have the money to see a psychiatrist privately and we don’t have the time to wait on a waiting list for however long it takes to get something through the public system.

And there’s a fear of people going to hospitals because then you get locked up for 72 hours apparently. I don’t think that’s actually the case. I think there’s different rules, but for a lot of people, that’s the perception of what it is. So if you or anyone you know is suffering or experiencing any of the signs like social isolation, changing in sleep patterns, changing in eating habits, stop doing what you normally do. If you lost interest in things that you were normally really, really interested in, if you have massive mood swings, if you stop taking care of yourself, like washing and doing all that kind of stuff, if you’re doing any of those things or you’re seeing someone doing all those things, just open up a conversation. You don’t have to say the words, are you okay?

But you can open up the conversation about how they’re feeling, how they’re going and what was going on in their life. I know I’ve got a great set of friends that if I was in any of those positions now, I could pick up the phone and call somebody; I’m blessed with that. But there are people that still don’t think that they can do that, and there are amazing help lines that you can call. And you know what? Sometimes just having a chat to the pharmacist or your GP is a really good place to start.

But I think the more important thing is, I at 21 thought- at 11 I thought I was alone in a terrible situation and wasn’t going to be able to get any help. So I had to get out of that situation. It was desperation to get out of a situation that led to that experience, which is really effed-up for an 11 year old. Thankfully, as I said, it didn’t work, but it wasn’t that I wanted to die, I just didn’t want to be in the situation I was in. So again, that’s like letting people know, how many people are in traumatic situations that can’t see over the fence, they can’t see the greener grass, because of the situation and the depressant that’s engulfing them. So I think we have to start from a really early age, letting people know, letting our children know that there’s always a greener side. There’s always someone you can talk to. There’s always a place in the world where you can get help for any of these moods, You know?
This is personal, but at 21, I’ve actually still got the letters. I took an overdose and as I was getting dopier and dopier my handwriting gets wonkier and wonkier. I was drinking and taking drugs, and I’ve still got them. And to read it, the pain was, I didn’t want to get shouted at anymore. Again, it was situational. I felt I couldn’t get out of a situation I was in and that situation was causing me so much pain. I now know that it was my interpretation of the situation and it was the thoughts that I had about the situation that put me in that state. For other people, the situation would have been perfectly fine. Like it wasn’t an abusive relationship or anything like that. I just couldn’t cope. And to read this writing now as a really emotionally intelligently developed a person that’s a tongue twister. That’s a real tongue twister.

But you know what I mean. I read those words now and it scares me that I was totally unconscious to the fact that I could get out of this, it was solvable. There was so much good in the world that I couldn’t see. So I just encourage you to pay attention to your friends, your family, and yourself. And if you’re feeling anything, you see someone experiencing anything, reach out. And if you’ve got children, or friends around you that you don’t think can handle stuff, talk about it. Talk about these things. And my daughter knows, absolutely knows that if anything goes pear shaped in her life or she’s ever feeling a certain way, because we’ve had so many open conversations about it, she knows what she needs to do. She knows there’s people out there that would listen to her.

So don’t be afraid to talk about it. One of the stigmas with suicide is we wont talk about it. And then, someone does tragically take their life and this horror is left with their with their family, and people treat them differently. And that doesn’t help the stigma that is associated with it. So, let’s just get rid of that stigma, I’ll get off my high horse now and we just need to talk about mental health more. We really do. And there’s so many modalities that can help people feel better about themselves, to become more developed, more aware, be happier human beings, be more grateful. You know me, everything starts with gratitude and habit. let’s just repeat that 10 times.