[365 Days of Extraordinary] Day 91 Transcript: The Difference Between A Goal And A Dream

Hello, happy Sunday. I hope you don’t mind me in my gym gear. It’s because I’m working on my goals, which is what we’re going to talk about today. I came up in a conversation with someone on Friday actually about the difference between a goal and a dream. You’ve all probably heard the quote that a goal is a dream with a deadline and that resonates to me, that’s fly. That sticks in my head and I really understand that because in all my years of working on goals, if it doesn’t have a deadline, it didn’t happen. But dreams, Oh my gosh, dreams can be huge. The best dreams are the ones that you have absolutely no freaking idea how it’s going to happen, but you can feel it from the tip of your toes to the tip of your head, to the tip of your eyelashes, to the tip of your nose, that it’s something you really want to go for.

Then when you’re setting your goals, the goals are smaller so that some of them have got to be really pushing your boundaries and your limits and make you feel uncomfortable as well. Otherwise, it’s kind of no point if you just write a goal and you achieve it five seconds later and you know that those goals you’re setting as strategically working towards that bigger dream. To me, the line between dream and vision is very, very, very similar in my methodology and how I work and how I think and how I create my life. I have a big overbearing dream of what I want for my life and that’s one sentence. I write that sentence in my trusty journal every single day. We’re going to need another one for the end of the year, say every single day in a different color, so it goes phiumph.

Then I actually write 10 big dreams. They’re not necessarily that word specific. Well, no, they are specific, but they’re not in a goal sense, measurable and timely and all that kind of stuff. I write those and then I write my goals and I know those goals are going to be working me towards closer and closer and closer to that dream. Now, I looked for quotes on the difference between dreams and goals and I don’t like a lot of them. I’m going to give you this fabulous quote that you might’ve heard from CS Lewis, which I love. “You’re never too old to set another goal or to dream a new dream.” Hey people, so remember that. What I wanted with this is to talk about is, you can literally wake up from a dream and it can be complete fantasy and totally unrealistic and it’s never going to happen. 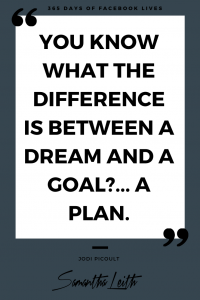 You have those weird dreams where all your teeth fall out or you have the dreams where you feel like you’re flying and you jolt and fall out of bed, that kind of thing. Dreams are a stretch of the imagination, pure imagination in the wonderful words of Willy Wonka. The goals and the steps or the tools or the tasks or the bits that get you there. That’s how I see it. When I was talking to this person on Friday, they also wanted to know, well and I do talk a lot about goals, but what are some of the ways that people talk about making sure they’re a right goal? I thought this is a good one because people have probably heard acronyms, but I’ll go through them one on. That’s what I’m going to do, go through the acronyms of goal setting.

There’s a couple of them. There’s two that you may actually never have heard of or you may have heard of vaguely somewhere in a book, but somewhere in the back of your mind, but you don’t actually use. Then there’s a standard one that most people, most coaches, most books you pick up, most personal development things you listen to, if they’re talking about goals, will actually refer to this one. One of the ones is the CLEAR acronym, on a clear day. That stands for challenging, legal. I’m sure people do set goals that are illegal, but I don’t work with them. Environmentally sound, appropriate and recorded. Then that all sounds a bit fancy. Right? But I’ll explain. Challenging. Yes, go. You’ve got to push yourself. You’ve got to go ih ih ih um um um to get there, to get there, got to get there, got to get there, got to get there. It motivates you to work.

Legal. Well we don’t want to encourage anybody to do anything illegal, so that goes without saying. Environmentally sound. In this day and age, we have to take care of, and we’re not just talking about the environment per se, but I take it in to mean similar to the attainable achievable thing. It’s got to be a sound idea. No, it’s green. That’s how I take it. That’s how I’ve understood it over the years. It’s going to be appropriate. If you are a vertically-challenged woman in her 80s, it’s probably inappropriate for you to set yourself a goal to be on stage with Manpower in Vegas. Just saying, probably not appropriate. Maybe start your own strip show. It’s going to be recorded. Whether it’s, I’m a written-goal person and I have vision boards and vision diaries and I have them or I surround myself with them, but recording it is really important.

Some people record, what do I call that? Some people record their goals on their phones and they might set alarms during the day and when the alarm goes off, the tone for that alarm is them saying they go. I’ve never done that one, but it intrigues me and I’m keen to try it. It’s about setting myself the time to actually sit down and record the goals. Okay, then there’s another one, interesting, another one called PURE. That’s four letters in PURE. That’s positive, understood, relevant and ethical. Positive in terms of, what’s a good example for that? “I don’t want to be broke anymore.” Okay. That’s not a very positive goal. How about you turn that into, “I consistently earn $1,000 a day.” A much better way of saying it, So it’s positive.

Relevant. Again, yeah, find the appropriate relevant. There’s some kind of goals you shouldn’t, just like, “Really, I shouldn’t try to be an Olympic gymnast. That’s never going to happen.” Yes, I am a freak and I can do the splits without warming up, but I’m never going to be an Olympic gymnast. Now I look like a funny news reader. That just reminded me of my wordy Lordy list. With us today, we have Janel from… Anyway, I’m going off on a tangent and I haven’t even been drinking. Ethical. That was the last one on PURE. Yeah. If you’re not ethical to people, call mass a B-I-T-C-H and it will bite you in the butt. Keep your goals ethical. Then the one of course we’ve probably all heard and know and love and actually understand, although there’s a couple of interchangeable words, it’s SMART. We all want to be smart against. SMART is specific, measurable, and then there’s the A which can be attainable, achievable, agreed. There’s all sorts of different words that people put in there. Realistic and timely.

Specific. Again, the specificity of a goal is really, really, really important. I own five silver rings with diamonds in them. They’re not real, by the way. It’s a lot more specific than I have great jewelry. Yeah, I have great jewelry. What’s great jewelry? It’s like saying I want to be normal. What’s the definition of normal people? Specificity, specificity, specificity. Measurable. Again, you’ve got to be able to go, “It’s that tick, that tick, that tick.” Not, “Oh, I’m fit.” What does fit mean? I can run five Ks. I can bench press my body weight. Did I know that and I can’t run focus. I can do a body combat class without feeling like I’m going to… No. That wouldn’t be specific because without feeling like I’m going to die, it’s not specific. I can do body combo in my house without sweating, but then I just think that defeats the purpose of the exercise, so bad example. You know what I mean.

Measurable, attainable, achievable and agreeable, it could be any of those As. Attainable. You know that one. I’m going to be a foot model by the 31st December 2019, a hired, a paid foot model. “I’m going to earn $1,000 in Portland.” Now, if you’ve seen my feet, that’s never going to happen. It’s never going to happen. It’s totally not attainable. It’s also not realistic. That could actually switch into either of those ones because sometimes when we dream big and then we’ve been going to go and say goal, we’ve got that big dream in there and then it sinks into the goal and makes that goal unrealistic. You have to put up that barrier, it’s almost like a barrier, to your drain while you’re setting the goals because the goals have to be chunked down. It’s like, “Yeah, chunk it down.”

Goals are chunking down your big dream and a big dream can take a long time to get there, but goals got to be timely. There’s another great quote, I could Google it, but I can’t remember, so I can’t remember who said it. It’s most of us overestimate what we can achieve in one year and underestimate what we can achieve in three years or five years, et cetera. That’s how I like to work with goals. I have my goals that are for this month. They’re the really short-term goals. I never like to work on more than five at a time. Then I do either a three-month lot or a six-month lot, but I don’t focus on them every day. Everyday, I’m really, really, really focused on my one-month goals and probably my six-month goals.

They’re the ones I’m writing, revisiting, et cetera. Then next month some of those three month goals will come into my one-month ones. If you get, it’s like a moving chart, which is how I work. Because those 90 days, there’s so much you can achieve in 90 days, but sometimes we think we can achieve that four times during the year. No, that’s not what happens. You can do these sprints when you’re really focused and set on things, but it’s a lot harder to do longer term, which is why a few of those sprints get you to incredible three-year goals. If you try and do it in 12 months, chances are it’s not going to happen.

Back to what the difference between a goal and dream is. It is, a dream is that big vision of something you want in life. It’s like that out there. It’s going to make you shiver in anticipation. Then a goal, these are the SMART, PURE, or CLEAR or a combination of all three. Actually, you can put them all together when you’re doing your goals, which can be fun. It’s something you can tick off or give yourself a little star stamp, is actually being done. Okay. That’s what it’s all about. Happy Sunday night. I hope you’ve learned something maybe. Mwah. See you soon.