Why when I’m in the kitchen do I dance? Happy Monday. Yes, it’s spring, so I’m wearing color. Got to love color. Numbing ourselves. What is it and why do we do it? So numbing yourself is when you just kind of want to squish how you’re feeling and not acknowledge it and push it away. It’s like hiding those old love letters that you don’t want to read but you don’t want to get rid of. You don’t want to acknowledge them. So you shove them in a shoe box and put them way up in the cupboard somewhere. Numbing your feelings is a bit like that I think. My take on it anyway. What’s interesting is, as humans, that would be us, we can numb positive feelings and negative feelings. Don’t know why you’d want to numb the positive ones, but some people do. I think that it’s kind of fear-based about not acknowledging how you’re actually feeling and sitting with it and feeling it, which is the whole point of feelings.

How do you numb? Many, many, many, many, many different ways. The most common, and the ones we’d probably talk about the most are: alcohol, food, drugs, sex and money stuff. They’re probably the five top ones that get spoken about. Having a bad day, don’t really want to acknowledge it, don’t want to feel it, you go spend money. Had a fight with your partner, don’t really want to do anything about it, you’re feeling like your tool because you worked at, you actually rolled in the acronym, so you drink a bottle of wine. Feeling unloved and unworthy and not good enough about yourself, so you go out and have lots of random sex. Feeling like you don’t quite fit in, so you do whatever you can to fit in, you really don’t want to knowledge why you think you don’t fit in, so you go out with people and take lots of drugs.

What was the one I missed? I did the money, alcohol. Oh, food. Food! Food. That would be the one I use the most. Used, there’s a D there, used the most. Bad day, great day, fight, sadness, anger, resentment, any feeling in the world. And let’s just not feel that. Let’s just eat something, squash it away. Because when your tummy’s full, you don’t feel anything. Wrong, wrong, wrong, wrong. The feelings are still there after the numbing. All the numbing does is puts a little lid on them for awhile. It’s like, dude, just put a lid on them and then you let them breathe and they pop out and cause havoc. Because what happens when you don’t deal with feelings that you’re having? They get big and then they get bigger and they get bigger and they’ll come up and slap you in the face when you least expect it and in an inopportune moment and they can lay dormant, for however long it actually takes you actually deal with that emotion. 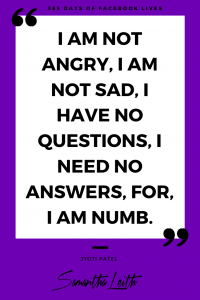 So I just only touched on those common ones, but there are many more. You can numb yourself with internet usage, with gardening, with anything to take you away from feeling how you’re feeling and to kind of satiate your being at that point in time, is what you’re doing to numb yourself and we’ve got to stop it. There’s so many people walking around this planet like zombies because they are numbing themselves and that’s no way to live.

Cause I’ll give you this brilliant fact: a feeling cannot hurt you. Yeah, it can’t. No matter how bad you feel. It is just something you’ve made up in here, in here, in your body, internally. It can’t kill you. It can’t maim you. It can’t chop off a limb. It can’t scar you, actually that it can scar you emotionally, so strike that. But we can deal with that. But it really can’t hurt you. It’s not like you’ve gone out in the road and being run over by a truck. Yet we use the phrase, I feel like I’ve been run over by the truck. Let me tell you, if you’re having the kind of day where you actually got run over by a truck, I think it’d be a lot worse than how you feel when you refer to that as a saying.

All a feeling does is alerts you to what’s going on for you and how you are dealing with, processing a certain situation or interaction or a person or an event or something. It’s how you’re processing what’s going on. That’s all it is. So all you got to do is stop, “Oh, how am I feeling? Okay. I’ve noticed that person has just said something to me and I’m feeling shameful. Why am I feeling shameful? I didn’t get what I said I was going to get done and done. What’s the solution? Apologize. Do what I said I’d get done.” Simple. That feeling of shame, it’s not going to bite you on the bum people. Okay? So that’s all it takes.

And what does it take to acknowledge those feelings? All that takes is being mindful, being present. Again, you know, I’m going to say meditation, gratitude, those kinds of things as well, do wonders for acknowledging that kind of thing. Give you an example. I had some stuff today I didn’t quite get finished, I’ve got a to do list the size of King Kong that I need to get done before I hit into UPW this week and so I was finding myself getting really, really stressed out this afternoon and starting to think I was hopeless because I haven’t got things finished and my to do list, some of those things are just going to go through the next week. So I’m obviously not competent or I’m just stupid because I set myself way too many things to do that couldn’t get done. Maybe I’ve just been wasting time. Round and round around, around, around. All in milliseconds, milliseconds, all off the back of one thing. Right?

But in those milliseconds, I’ve convinced myself I’m useless, stupid, over committed, lazy, insert any negative word there. And then I’m like, “Oh, I feel like shit. I really feel like shit.” Next thing you know, LD sends me a picture of the two pizzas she made at school today, these vegetarian pizzas and they looked amazing. Amazing. My first train of thought, first I had a thought based on the picture that she sent me and how I was feeling. And then I sent my best year text with the picture going, “I need carbs.” Automatically I was feeling… I was like, “I need carbs. Give me carbs.” I don’t need carbs.

And I was like, “Hang on. No, I’m just beating myself up and I’m trying to get rid of all those feelings and if I go and have some carbs, then I’ll get a little bit of a sugar rush and then I won’t notice how I’m feeling and I can avoid it all and deal with it tomorrow.” Well, all that stuff’s still going to be there tomorrow or later this afternoon or tonight or tomorrow morning when I wake up. Eating the carbs is just going to numb that for a little while and not actually help with any of the situations. So it happens. It still happens. I’m so much better at dealing with it. I haven’t come home and had a glass of wine. I think I’m on day 94, 95, something like that of not drinking. I’m not numbing. I’ve looked at how I was feeling and I’ve tried to work out, I’ve actually taken some time now to work out how I can get as much as I can done, before I headed into UPW.

And those feelings didn’t kill me. They’ve all gone now. I’m not stupid. I don’t feel lazy. Any of those things, they were split second things and they’re gone because I’m learning to not numb my feelings. I’m learning to actually feel them and go, “This is like a red light thing. Is good, bad, or indifferent. What do I do with it?” Deal with it, move on.

So that’s what I want to say to you guys. In the next 24 hours, try and acknowledge and sit with how you’re feeling when you have any of those guttural things where you want to… Especially the numbing stuff where you want to automatically reach for something. It might even be a distraction like, “Oh, I’m feeling really stressed. I’ve got all this stuff to do. I’ll go on Facebook.” Notice it.

So for 24 hours, just notice all those things. You don’t need to try and change it, but just notice how you feel and what you want to do. And then, maybe 24 hours later, or if you’re feeling up to it tomorrow, when you’ve noticed that feeling and have gone to the automatic… “Do this so don’t have to think about all of this stuff.” Try and work out what you’re actually feeling and know that no matter how bad that feeling is, you still will not be hit by a truck. It’s still not that bad. Okay? It’s not physical, it’s all just inside. So that’s why my words of wisdom for today. Take them if you like, and I will see you all tomorrow.