Good evening. It’s late. Just got home from Day zero of Unleash The Power Within with Tony Robbins. So I’m crewing and today was kind of the day we get everything organized and get to know our roles and what we’re doing. And then we start registering people and bringing them into the Unleash The Power Within experience. So, they’re pretty full on long days, the next couple of days, so when I do my Lives, will probably be a bit random.

But, something really hit me today and that’s what I want to share. So I said something to someone this evening and they reacted badly to what I said and they called me on it. I hadn’t done anything wrong, but it had triggered this person and they wanted to make a point of why what I said wasn’t acceptable to them. And [inaudible 00:00:59] it doesn’t matter what it was. But about half an hour later, I was thinking what was different about that interaction? What’s different? And I realized I was okay with it, and that may strike you as really funny.

But normally, if I’ve said something to someone and someone’s reacted in a less than positive way, no I won’t say normally, but in the past, if I’d said something and someone’s reacted in less than positive way; I have felt shame, guilt, worry, stress, anxiety. I’ve been really upset because I upset them, I’ve been regretful, I’ve wished I could turn back time, I’ve felt like a naughty scolded child, gosh and all these really, really terrible thoughts. And I would have come home and spent the night going, “Oh my God, that person’s going to hate me. I should never said that…” and worked myself into this complete ball because I’d said something. I’d been, not told off but you know, told not to do that. And I didn’t feel any of those things, and I was like, “Oh, okay, this is different. Why don’t I feel any of these things? Cause I said something and they reacted like it was a bad thing. So why am I okay with it?” And it’s all this work! It works people! 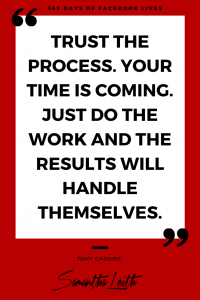 So I was like, “Why do I feel different?” I was like, “Well, I know my intention in what I said was fabulous. First time I’d met this person, so I wasn’t to know that that was one of their things. They reacted in a way that was perfect for them, which was constructive criticism to me of what I’d said and I was okay with it”.

I had to share that because I was like, “Wow, this is different. This is really new, being okay with being criticized and or having something I’ve done criticized or point pulled up on and me not being upset about it. I can’t tell you how different it feels. I literally would have been a mess two years ago if I’d been told off for something I’d said to somebody, and I’m not. I actually went up to this woman later and explained the situation and why I said what I said and the intention behind it and explained that “Thank you for saying what you said because I had no idea that some people actually didn’t like that”.

And just to let you know, a couple of years ago I would have been in that corner going, “Oh my God, I’m such a terrible person, now they don’t like me and I’m never going to get anywhere”. Not literally crying, but in my head it would’ve been the disaster, end of the world. It’s amazing. And it’s one of those things, when you’re learning things and, whether its traditional education, personal education, any of those things, sometimes you know that you’ve learned something, other times you don’t know. I had no idea I had worked on whatever it is I’ve worked on, that has made me be okay with this kind of thing, and hence the title of tonight’s Live- It won’t happen overnight, but it will happen. It’s not just about shampoo, this is a journey and obviously the work I’m doing and the work I’ve done and the work I do with my clients has helped me get to the point where someone can say “Oi. Sam. No. Okay.” in that manner.

And someone asked me, well, what do you say to someone if they say something you don’t like? And I said, well traditionally I’d try and make something fun of it. I kind of like make a joke of it. And I guess that’s my way of dealing with things I don’t particularly like. So give you an example if someone calls me Sammy, there’s a handful of people that have been really, really close friends for a very long time that can call me Sammy, and there’s some other people. So if someone says, has said to me in the past, Oh Sammy, I’m like, “Can’t call me Sammy, we haven’t slept together”. And that’s like my jokey kind of response, cause everyone goes, “Ha ha, that’s so funny. I’m not going to sleep with you”. And I’m like, “Well then, you can’t call me Sammy”.