[365 Days of Extraordinary] Day 97 Transcript: Working On Your Perceived Weakness

I’m in the car, but I’ve pulled over to the side of the road. I’m parked, not dangerous, but I said I do a live every single day, so I needed to start this before midnight, so I’m here. So it’s day three of UPW and I made a commitment to myself before I came into UPW, Unleash the power. I don’t know if you’ve missed the last couple of days, which is a Tony Robbins seminar. I made the commitment to myself to work on a couple of things that I perceive as weaknesses in the stuff I do every day and the stuff I do with my clients and how I want to grow my business. And those two weaknesses to me were patience within group environments. I can tend to get a little impatient if people aren’t picking up things and doing things at the pace to which I like to do things. I find I can get frustrated. 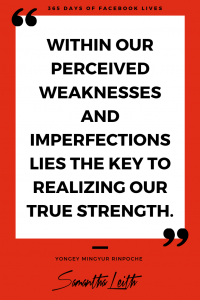 I don’t think I show it, but I know I need to work on it myself. So that’s been phenomenal. Being in group environments where we’re learning something new. And I just have to say to myself, if I start getting a bit tetchy, because someone’s asked a few lots of questions that I just breathe and we’re all different and we all learn at different paces and we all have different learning modalities and it’s very different being in a group like that than it is to being on stage in front of group and teaching them or showing them or helping them and kind of get to create the pace. But in an environment when you’re a group learning together, I don’t have any control over that pace. So I need to learn to take a couple of deep breaths, relax and acknowledge that, “Hey, we’re not all at the same level.”

And there’s some things I’m way further down the levels than other people in some things. But those areas where I do feel I’m a bit more confident, I can tend to get really impatient. So that’s been fantastic for me. I’ve really enjoyed that. And the other one was, I really need to want to develop my sales skills. And so today I was working with a lot of the Tony Robbins sales guys and that has been a phenomenal experience. These are people that have been in this industry doing this work for 10, 20… I think one person I spoke to 28 years, they’ve been working with Tony, which says a lot about the business, the man, et cetera. But what would you talk about in coaching and in speaking, and I know so many people talk about this kind of thing is this immersion and this learning from the best and surrounding yourself with the best in you.

You’ve all heard the saying you become the average of the five people you hang around. So I’ve really tried to throw myself in the deep end and working with some of the Australian guys, some of the overseas guys, and just being like a sponge and soaking it up and then being able to deliver some of the stuff that I’ve been learning straight away to some of the participants at UPW and it’s been phenomenal. It was probably one of the first events I’ve been into where I’ve been really clear about things I knew I needed to work on.

Sometimes like you go in and you’re like, “Oh, I just want to learn anything.” Which is great. Absolutely great. But I’ve always kind of admired those people that have gone, “I’m here to get X, Y, or Z.” I’m obviously open to learning, God, anything. But it’s been great being able to do that and acknowledging that, especially the patience one. That was a tough one for me to go, you know what? I really need to work on this cause I’m not so patient. So that’s been great. So that’s my day. Three learnings. So night night.