Episode #26: What exactly is Charisma, and how do you use it for better communication

Are you ready to be the extraordinary person you were born to be? The life you’ve always dreamt of is so much easier than you think, and we are going to look at how this month on The Samantha Leith Show with me, Samantha Leith. Over the four weeks, we’re going to look at clarity, confidence, courage, and charisma, which what I think are the four key components of how to be extraordinary. Let’s go.

Here we are at the final C in the how to be extraordinary matrix, which sounds a little bit fancier than it is. The reality is we need other people in our lives, and our charisma plays a big part in that. The Cambridge dictionary says charisma is a special power that some people have naturally, that makes them able to influence other people and attract their attention and admiration. Some people say it’s that X factor that some people have. Me I think X factor is that beautiful spot where our clarity, confidence, courage and charisma meet.

Yes some people exude that thing that others don’t have naturally, but like so many things it’s a skill we can learn. Where confidence is all about how we think and feel about ourselves, charisma is all about our relationship with others. Marianne Williamson has a great quote, “Charisma is a sparkle in people that money can’t buy, it’s an invisible energy with visible effects.” Can you think of five people that you think are really charismatic? What makes them so? Is it that they stood tall, walked into the room with a booming voice and got you to do what they wanted? Sometimes it is, but a lot of the time it is so much more subtle. Some of the common traits I know knock me down with a feather are common to confident and courageous people too.

They’re vulnerable, they’re curious, they have a growth mindset, they tell a good story, they’re near a behavior, they’re good listeners, they’re authentic, they have great communication skills, they’re empathetic and they ask lots of questions. So what of those traits do you have? What ones would you like to have? In the worksheet there’s a seven day charisma journey that you can go on. It’s easy and fun, you’ll love it. Charisma isn’t a one size fits all type of thing. There’ll be traits that feel great when you try them on, and others that make you feel a bit that’s okay. Go with what works for you, that’s when it’ll be authentic and you won’t have that reek of a bad salesman. There’s a gorgeous example of charisma in the story of a woman who was privileged to dine with both William Gladstone and Benjamin Disraeli, Great Britain’s two candidates in the 1868 elections.

That brings me to negatives of charisma. I hate saying it, but yes this skill can and has historically been used to manipulate people. Do not add your name to that list please. I often get asked if you can fake it till you make it with charisma, and yeah you can, but your body language is vital and will often give you away. A blink when you’re pretending to pay close attention in a conversation will have you quickly shown as not being authentic and you really don’t want that.

Now let’s look at the four P’s of charisma, because I love alliteration.

Pose, how you carry yourself. It’s the space you take up.

Prose, the words that come out of your mouth.

Poise, it’s that stuff that’s inside you, your equilibrium, the composure that you have.

Peer is your eye contact, whether you’re on a conversation, on a stage, through a screen.

There are a couple of things that can get in the way of how charismatic you’re feeling really quickly, from self-doubt to what you’re wearing. Learning to get comfortable in this discomfort and not have it mess with your charisma is important and great for your confidence, nudge-nudge wink-wink, I can’t wink.

Olivia Fox Cabane in her book The Charisma Myth spoke about four different types of charisma.

There’s visionary charisma, which is like the people that make you believe in their dream, like you’re there boots and all. Think of Martin Luther King and Steve Jobs.

Then there’s authority charisma, which is really powerful because it’s based on status and confidence. Not necessarily always likable because sometimes you can be intimidated by these people like Colin Powell or Michael Jordan, Bill Gates.

Then there’s focus charisma, which is all about presence. It’s about listening in and zoning in to what people say, making them feel listened and understood. Sometimes you can come across a little bit too warm and comforting or submissive, especially if you need to be a bit more authoritative, but think of people like Bill Clinton.

Finally, there’s kindness charisma, which is about focusing on warmth. It’s about that emotional bond that makes people feel really, really welcome. Think of the Dalai Lama for example, or a nurse.

One of the greatest commonalities of charismatic people is their ability to create and stay in rapport, and they communicate well. Rapport is the ultimate tool for producing results with other people. No matter what you want in your life, if you can develop rapport with the right people, you’ll be able to fill their needs and they’ll be able to fill yours, win-win. You can build rapport on screen, in real life, on the radio, podcast, stages, conversation at a restaurant. Any relationship in any area of your life needs rapport to be successful, and I hate to say it but yes first impressions do count. According to researchers Linda Tickle-Degnen and Robert Rosenthal, when you have a rapport with someone you share mutual attentiveness, positivity, coordination. This connection can appear instantly when you click with someone, or it can develop slowly over time. It can grow naturally without intent, or you can deliberately set out to build it.

The first and most vital aspect of building rapport is you. How are you feeling really? Your confidence, clarity and courage all play a role in being charismatic and being able to build rapport.

Now because I’m a bit of a jag, I like to call it the rapport rumba.

This dance is made up of the following steps, body language. Things like eye contact, facial expressions, gesture, breathing, posture, touch, etcetera. When I say matching and mirroring, I don’t mean someone goes like that and then you go like that. Not that kind of mirroring, it would make you look like a doofus. Don’t copy them that’s not right. It’s more of like going with the flow about how they’re using their body language. Match their speech pattern, tone, tempo, volume, those kind of things.

Then we’ve got sense and language. If you’re with someone and they’re swearing like a trooper, you can probably drop the odd word. But if you’re in a situation where the person’s talking quite a proper tone, the last thing you want to do is drop an F bomb. No completely inappropriate. They’re talking too fast you might speed up a little bit. The other thing is you want to listen to auditory clues. People have different kinds of styles, so there’s visual, auditory, kinesthetic, I can never say it properly but olfactory and gustatory. I think I did it. So if people are talking about oh, that feels or I can see that or something stinks or I can taste the victory, they’re all the different ways people learn. People speak in the same tone generally as how they learn, I know.

Common ground, can you relate to the other person through a shared experience or opinion? We all want to feel seen, and this empathy and understanding is a critical tool for building good report and communicating. You want to listen. Probably heard it before, two ears one mouth. Listen to understand people, then when appropriate repeat what they said and what you heard and what you felt, bingo. Then you want to be present. Be completely present with the people. Don’t be looking at your phone, don’t pick up another Google, don’t be cleaning your glasses, be completely present with the person. People can tell if you’re not really there. If you’re thinking about the dishes for example, you’re probably close to the person you’re having the rapport rumba with, got to dance and that’s not going to work. You want to be open to ideas, conversations, changes in direction, and beware of falling into devil’s advocate mode. It’s a tough one that one. Walk in their shoes and try to see the other person’s point of view.

You want to be friendly. I know it sounds so simple, but remember their name. Find something you like or respect about the person, and it will create an instantly friendlier vibe. You want to be yourself, do not be fake. Many of us have spoken up before are a bit chameleon-like, and in a rapport building situation being chameleon can be really, really useful and it can be helpful. But still be yourself, do not be fake. Because fake people are shitty people and we don’t want to be them okay. A little hint, a lot of people say when building rapport, finding a compliment to give someone is an important thing, but again only if it’s situationally perfect. You want to be interested, inquire about their family, friends and pets, if they have pets and you think they’re open to talking about these things. Yet listening helps with that one.

Ask open not closed questions, so you really get to know them. Then finally offer value. By listening and asking great questions, maybe you’ve been doing some research before you meet them, you’ll gain an understanding of what’s of value to people. Disclaimer, do not tell people what to do unless they’ve asked you to tell them what to do. If they’re open check, you can offer advice and guidance will truly be of value. Not just so you can toot your own horn. You might even know someone that would be great for them to meet, who knows could be a future marriage. Hint, hint anybody? Anyway, that was a really long one sorry. In the worksheet there’s some more exercises for you to do so you can work on this amazing skill. I’ll say it again, I believe we all have extraordinary in us. Here’s my manifesto to help you along the way as you work on the foundations of clarity, confidence, courage and charisma.

Let your brilliant shine, embrace education, elevate your mind and nourish your soul. Strive for excellence in everything you do. Treat your clients like gold and your loved ones like diamonds, redefine success on your own terms. Appreciate everything you have. Commit to a life less ordinary. Remember to have fun, dream big and take even bigger action. Innovate and be inspiring. Nurture your passion and creativity every day. Ask for help. Recognize the achievements in others, and finally say yes to opportunities.

There you go, be extraordinary.

Thank you so much for watching this week’s episode of The Samantha Leith Show. I do really believe you are born to be extraordinary, and I’d love to help you achieve your vision. So head on over to www.samanthaleith.com/freebies, I always forget which way, for this month’s workbook and tag me or message me about your progress. 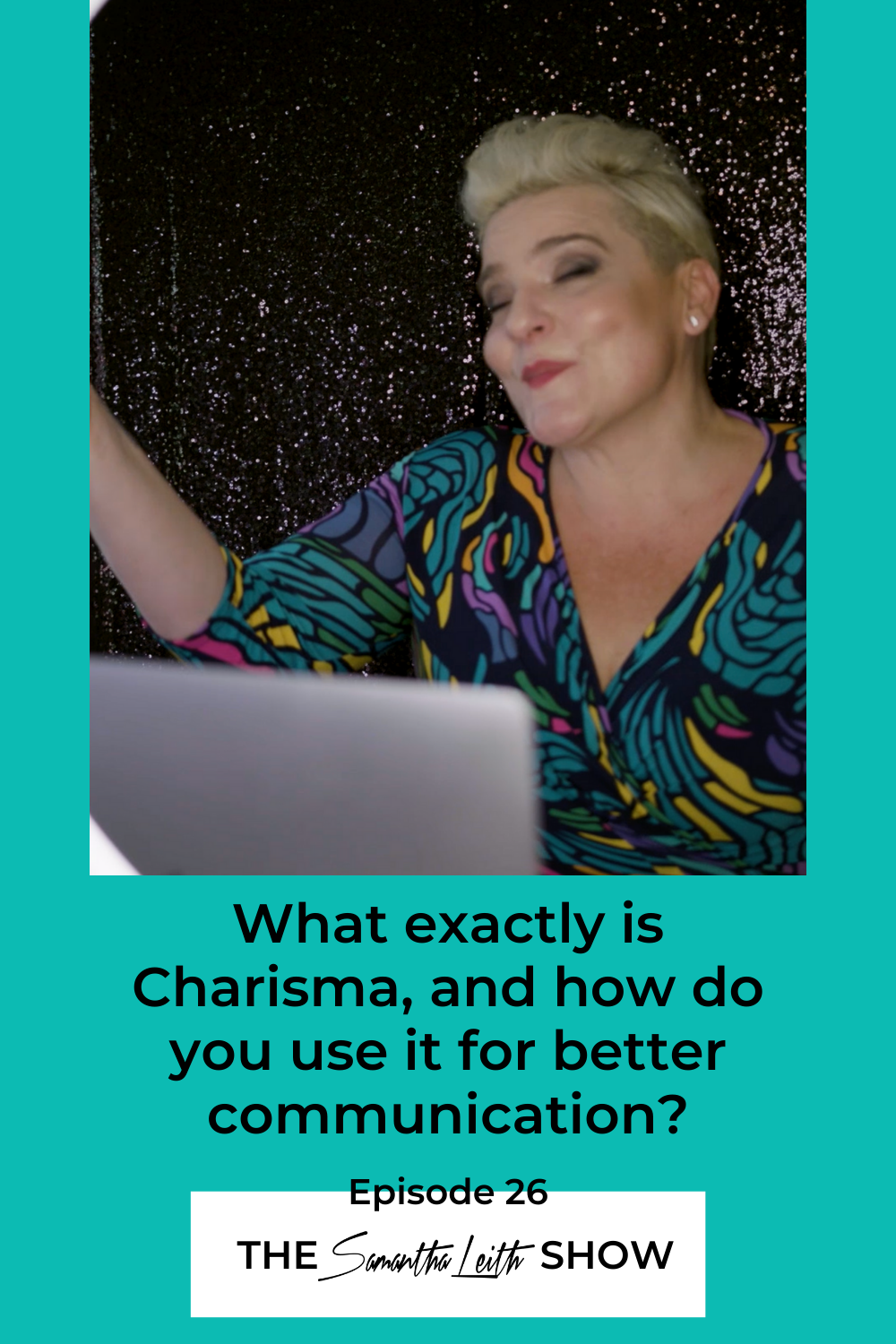