Episode #32: The Beliefs you need for Success

Success is a word that so many of us aspire to, yet many of us never actually take the time to work out what it is, let alone do the work to get there. So let’s fix that now. Hi, I’m Samantha Leith and welcome to the Samantha Leith Show. This month is all about creating that roadmap that you need and getting the tools required for success. Will it be easy? No. Will it be worth it? Hell to the yes.

Next, it’s all about the believe phase. You have this big dream that you cemented in last week’s episode. Bottom line though, do you think you have what it takes to get what you want? I do. If you don’t think you can make it anywhere, I do. So borrow my belief in you while you need it. Borrow it for as long as you want. Your beliefs aren’t simply, yep, I can do it. It runs a lot deeper. Somewhere in the recesses of our mind, there may be a story that goes like, I need to be a size 10 to get work. Nobody enjoys their job. Working with family is what everybody should do. You’ll have to be a bitch to be famous. Rich people have to work really, really hard. You have to have something sensible to fall back on.

Yep. They are some of the crazy beliefs that I’ve held over time. It’s those beliefs that had me doing accounting while singing five nights a week, and never actually throwing myself into all of my dreams for so many years. You can change those beliefs though. I promise. First, you need to know what they are. Yeah, but it’s in the worksheet. But here are the basics. For deep belief work, you want to take paper and ask yourself the following: I am… The world is… Other people are…

This month isn’t just about beliefs though. It’s coming. I promise. So for now, it’s more than okay to stick with asking just I am… Then write freely, as many things that come up. I’m funny. I’m bad with money. I’m dumb. I’m smart. I’m right. I’m a disaster. I only meant for… How does that belief make you feel? When did you first have the belief? Who has influenced this belief? Will this belief help you achieve any of those dreams that we talked about earlier?

Then we need to turn those beliefs around, baby. What would a better belief be? Take it easy here. You can’t go from, I’m a freaking idiot to, I’m a legend, in one breath. You can, however, go from, I’m always going to be stuck here to, I’m working on changing my life. It’s a bit like the mirror exercise I’ve covered before going from, I hate my body to, I’m a sexy beast. It’s never going to happen. So we go to, I love my eyes, and we build from there.

This work doesn’t actually end here either. As you go about building success for yourself, you’ll get reminders, kicks in the butt, that kind of thing of those long-held beliefs that you’ll need to combat. Say one of your beliefs was, selling is so sleazy. And the belief you are working on is, I help people get what they need. And you have a proposal that you’ve worked your butt off on and it gets rejected. Not just the proposal. You think the prospective client didn’t even like you. you are devastated. There will be gold in them near hills, I promise.

How did the proposal not give them what they need? Where did you see hints that they did like you? What examples do you have of giving someone what they actually need? Who in your life really does show you how much they like you? These questions are obviously unique to that situation, but you get the drift.

When a belief is being tested out, you want to search for examples of where the belief is true. You are good with money. There are some friendly bosses. Single dads can find love again. You may start noticing beliefs that people around you have. We’re like sponges, absorbing everything. So pay attention to what you’re taking on from others.

Speaking of taking on things from other people around you, what are the beliefs that you need for success, huh? Different question. Your version of success. I would bet money, crypto, actually, if I understood it at all, that Elon Musk needs some different beliefs to most of us because of what his dream is. Yep. That’s me subtly tying it all back together.

You’ve got your big dream. It’s written out. It’s colored up. It’s Canva-ed to the max. What do you need to believe to do it? That’s the million-dollar question. And we can look to others for inspiration with this. It’s all around us. Chunk it down. Yep. Worksheet. Is there a person in the world who’s achieved something similar to what your dream is? Or even part of it? This is where your virtual advisory board is amazing. For me, Nigella emulates so many things, but that’s just an example. Ah, Nigella. Then, what are the key elements to what your dream is? Is there maybe an education piece or a location in common or a monetary amount, a business idea. Is there a person or people that have nailed that bit before you? I’m guessing you don’t actually have these people on speed dial. So where you can, grab books, listen to podcasts, read interviews, anything you can get your hands on that’ll help you see the deliberate beliefs that these people have had in order to achieve their dreams.

Keep notes on what you find. No deadline needed. This is not a goal. I’m always coming across something. And I make a note in a master Google doc that I keep, because maybe there’s a nugget I need that’s going to be perfect in a particular moment. You know what? There’s nothing new in this world. There’s a belief that Sara Blakely had, for example, that failure was a good thing, instilled in her, as her father asked her every day, “What did you fail at today?” This belief made it okay for her to try and fail, get up again, throw everything at it, and finally succeed with Spanx. I’ve got to tell you, every time I want to smooth a line under an outfit, I’m really grateful that she had that belief.

Here are a few core beliefs that some go-getters have. You might want to take some on. They’re in control of their success. Failure is to be embraced. There is always more money and opportunities. I have everything I need already. Things happen at the right time. You want to attach the beliefs that you feel you need in order to achieve success to the different parts of your vision. So in the worksheet, I know I’m really predictable, there’s space for you to write the goals that are attached to your bigger version of success, and space for you to add the belief that you think you need for that particular goal. Go try it on. Write it in your journal.

Beliefs are often also tied into our identity. You can go back to the March episodes to do more of the identity work. I suck at exercise, for example, can quickly be changed to, I am fit, every time you step into the gym or pop on your trainers. Don’t go overboard and think you can have 10 new beliefs overnight. Next week, you’ll be at the Oscars getting an award. But refer to those beliefs often.

I grew up thinking in my bones, that failure was a terrible thing. I don’t regret anything in my life. However, I wonder what might have been different had I taken that extra chance, even if I could have failed. These days, I take more chances and it’s amazing. But sometimes that old belief creeps up and bites me in the butt. So what do I do about it? What can you do about it? You need to remember why changing the belief is important to you. So go back to the work in the worksheet or your journal, and step back into your new belief. Step back into your new belief. You get my drift.

If you believe you have to starve yourself to lose weight, you’ll probably go up and down and be miserable. If you believe change to be more like, I know nourishing my body and moving it makes me feel great, you are more likely to achieve and sustain that goal. These things may take time. After all, most of these beliefs have been with us for a long, long time. That’s okay. It’s an evolution.

Thank you so much for watching this week’s episode of the Samantha Leith Show. Don’t forget to subscribe so you don’t miss any episodes. Grab the worksheets and let a friend who you know is wanting something more, know about this video. It may be the thing they need right now to help them be extraordinary. 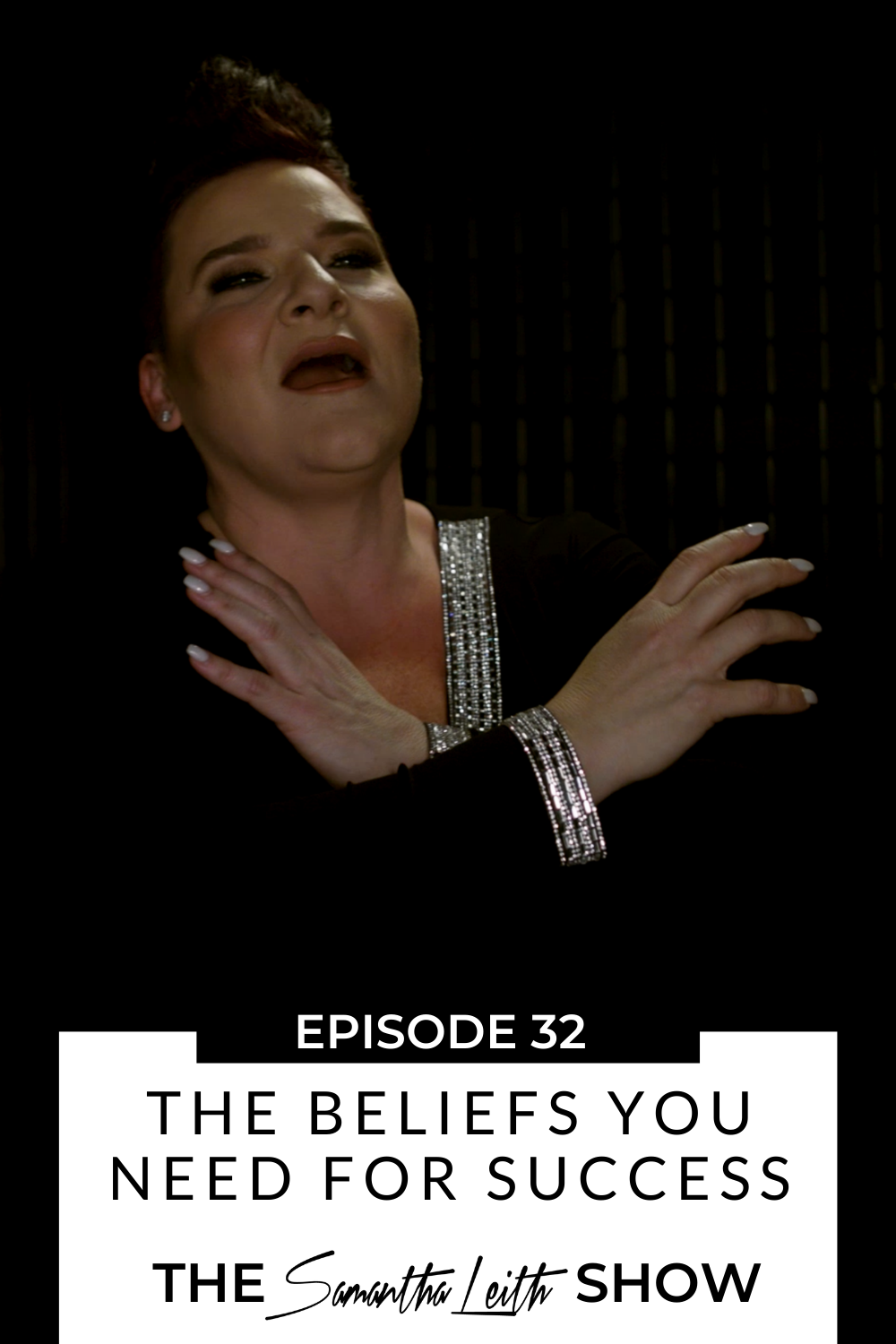