Episode 43: The Mind Body Connection and Indulging in Thoughts

Sometimes a thought will have triggered a feeling that is so obvious in your body even blind aunt Betty could see it. Other times it’s less obvious. So we need to take time to explore.

Seriously, if people could actually read our minds, they probably think we were nuts. If you’re anything like me, you probably think yourself a bit bonkers some days. Our mind is our most powerful tool yet we aren’t taught how to manage it. Now that is crazy. So this month on the Samantha Leith Show, we’re going to take a squeeze at the chaos and learn some ways to manage our minds.

In the words of Shakira, you know my hips don’t lie and I’m starting to feel it’s right. Well, okay. Our bodies don’t lie, but our minds most definitely do. You’ve probably proven that over and over again as you’ve been doing this work on your thoughts. When I first tried feeling my thoughts, I felt like a twit. A thought doesn’t have a place or a something in my body is what I thought. Yes they do. We just don’t notice it.

Have you ever had the chills when you’ve been in a dark place late at night? There’s probably a fearful thought behind that. What about when you’ve been watching a movie and you’re reminded of a loved one and tears fall? We literally feel our thoughts and our feelings. They’re in our bodies. Back to the I’m too tired story that went on to ruin your day the other day, last week. That thought would’ve made you feel more tired. You would’ve done everything at a slower pace and even yawned more.

Side note I wasn’t thinking I was tired, but when I typed the word yawn, when I did this, I yawned. One of the greatest things we can do to have more of a mind body connection is meditation. Now I’m not going to take you through one here, but I do love Omvana as a meditation app. But there’s truckloads of amazing free guided meditations out there. So have a Google.

Stop. Not before you actually watch this video. Sometimes a thought will have triggered a feeling that is so obvious in your body even blind aunt Betty could see it. Other times it’s less obvious so we need to take time to explore. I suggest doing this when you have time to work on a thought. I’m not here trying to create more work for you so you can think you have too much to do and then indulge in overwhelm. But we’ll talk more about indulging later.

When a negative thought’s popped up to say hello, stop and take four square or box breaths. We’re going to do it together. Breathe out everything you have. In through your nose for four, hold at the top for four, out through your mouth for four. Pause and hold your breath for four. Then do that four times. Slow it down a little bit. This will center you, connect you to your body, calm your nervous system, reduce any stress and actually just feels good.

Once you’ve done this think of the thought again and notice where you feel it in your body. What does it actually feel like? Maybe it’s a heat in your chest or a tightness in your jaw. Wherever it is you want to slowly tense and release the area to allow some of the physicality of the negative thought to dissipate. If it’s your neck, drop it, have a circle. Shrug your shoulders, clench and release your fists because that’s where I show frustration. Breathe in and out to relax your stomach or put your hands on your heart to soothe it. Swiggle your jaw to release tension.

Yet maybe if you sense some thoughts in your butt, do some clench and release there. If it’s in your anatomy, give your kegels a go girls. It’s great for your pelvic floor and for releasing tension. Trust me, win, win. There are many therapies that work on a better mind body connection. I’m about to give somatic therapy a go to work on some of my past trauma. So I’ll keep you posted.

Once you’ve noticed and released the physicality of a thought, you want to shift your body to feeling more positive. Movement of any kind will help you with this and hey, if you can, have a boogie. Makes everything feel better. Don’t do that in this bra. If your thought has been based on a lack of confidence, your shoulders may have been hunched and your eyes focusing downwards. Stand up tall, shoulders back, hips back, chest out and smile. This change in your physiology will automatically help lift your thinking.

Here’s a little tip. When you’re in a meeting and your thought is this meeting is a complete waste of time and you start to feel hot and stiff, don’t suddenly sit in the corner box breathe and connect with your body. Simply start to be more aware in that moment and do what you can to shift the physicality of the thought. Do a quick flip where possible of the thought.

I mentioned indulging in thoughts before. So let’s have a bit of a look. Put your hand up if you think you sometimes indulge in thoughts. If you didn’t put your hand up, you are lying to yourself, buddy. We all do it, have done it at some point. Where do you think sayings like have a pity party then build a bridge to get over it come from? Some thoughts are almost begging to be indulged. Like a spoiled child we’ve created habit over time and we just keep doing it.

The one that is the most common for me, which I mentioned earlier is the overwhelm. I don’t actually realize I’m doing it till I’m doing it, if that makes sense. I put way too much on my to-do list. Then I start thinking I’m too busy and I’ll need a miracle to get it all done. Then I let the waves of overwhelm take over and I almost wallow in the indulgence of that. It gives me a hall pass for procrastination, apathy, numbing myself with food, or booze, or porn or CandyCrush or TV. Anything to take away from the act of actually doing what I need to do.

For others they may indulge in feeling sad because it means they get attention. People step up to help them to take away their pain, make them smile. When all along it may have been a simple negative thought that they could actually have worked on. This indulging in a negative thought gives us an excuse to not deal with the reality of the thought. I catch myself now and I take things off, or I move them from my to-do list or down another week. I’ll take a walk and I’ll ask myself what really actually needs to be done. I do the work to break the pattern.

If when you were younger and you had a tantrum you were given attention, then anything you wanted to calm you, you may be an adult who now has the habit of expressing the tiniest tiny bit of anger and the crowds come running to appease you. Anything, because we don’t know how to deal with your anger and neither do you.

If you want to be logical about it, okay, I try and be logical sometimes people. This is one of the most obvious and very, very common ones. Using food to indulge in feeling bad about your body. Even saying it feels bonkers, but stick with me here because you know it’s true. Your thought is I hate my body and I’ll never be able to be the size I want. The indulgence takes over. So instead of working on flipping the thought, you give into it. There’s clearly no point trying so you sit on the couch, watching Bridgeton and eating your way to the bottom of the tub of ice cream. Now you feel even worse physically and mentally. You’ve proven to yourself that you’re a failure when it comes to your weight.

So guess what? Then you go to bed late after polishing off a bottle of wine and you wake up to tell your friend you can’t go to their party because you are sick, but really it’s because of the shame welling up as you look into your wardrobe and yourself in the mirror, thinking you got nothing to wear. Then you go back to the couch. Yep. I’ve done that. Maybe you have too.

This week I want you to keep working on those thoughts with the exercises we’ve been doing on the worksheet and get honest. If you notice a thought you’re indulging in, do something, anything to break the pattern. Change your physiology, phone a friend, journal, or walk over to that fridge and throw out the chocolate instead of opening it.

Thank you for watching this week’s episode of the Samantha Leith Show with me, Samantha Leith. If you’ve liked any of these episodes, I’d love it if you subscribed, shared or commented because it really helps. If you want some more support with managing your mind, tag me on social media at Samantha Leith and let’s have a chat. Remember those thoughts that take up that space between our ears are capable of supporting our fabulousness or bringing us crashing down and you, my dear, are in the driver’s seat.

🎶
If you could read my mind
Songwriters: Gordon Lightfoot
© Warner Chappell Music, Inc. 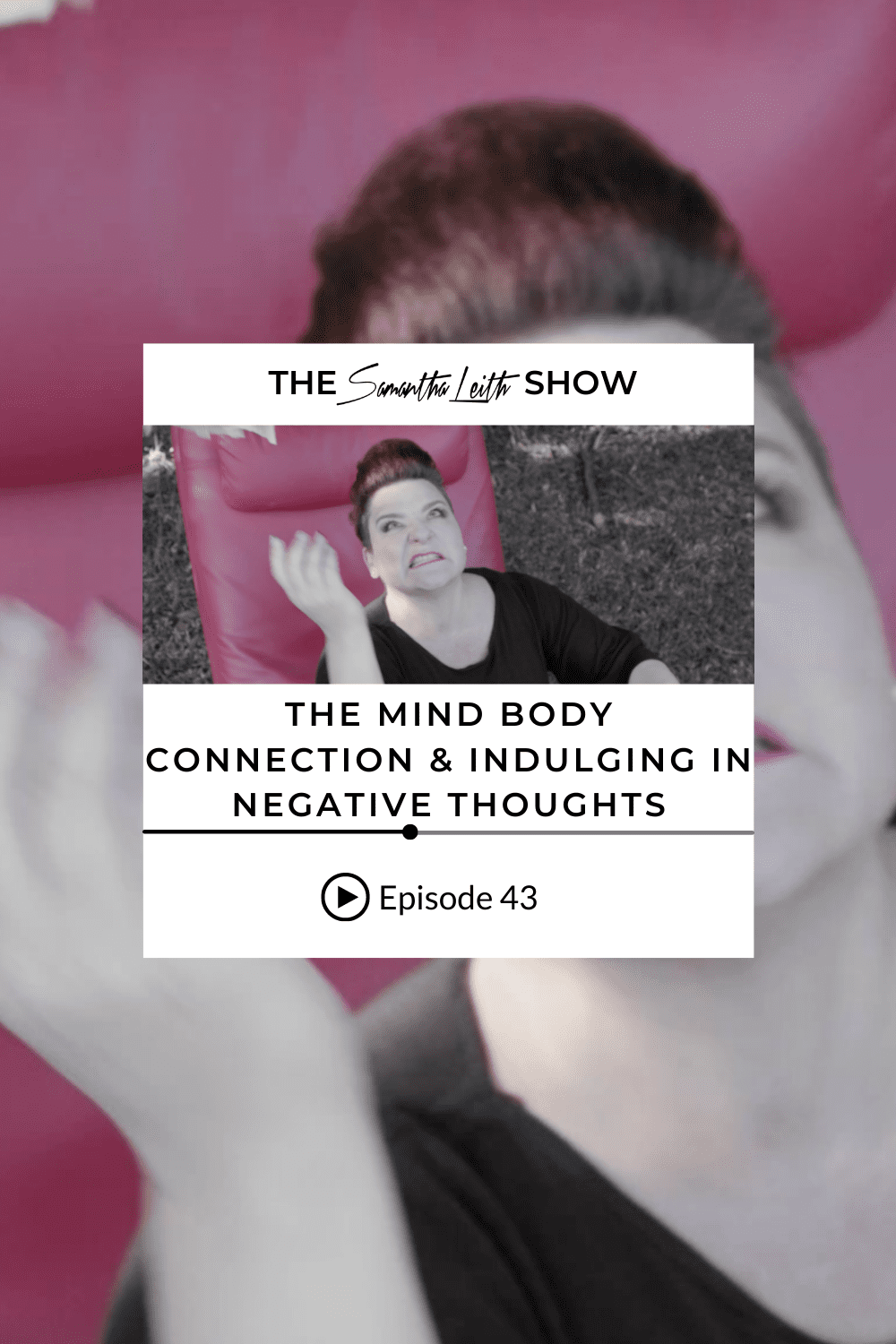 If you enjoyed this episode please rate, review, & follow on Apple Podcasts. This helps others to find the podcast and if you’re not following you may miss out on something extraordinary.

You can even do it right now.  Click here and simply scroll down to the bottom, tap ⭐⭐⭐⭐⭐ and then select ‘Write a Review’.

I’d love to hear what you enjoyed about the episode, so take a screenshot and share it on Instagram. Be sure to tag me on @samanthaleith to let me know!

Email me the latest episodes